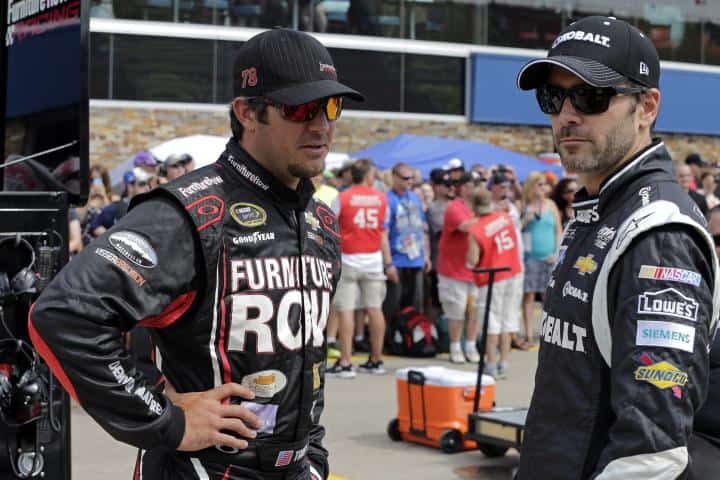 This guy showed up on my birthday @ReconyxInc Takes a sweet picture ?? pic.twitter.com/hX7vnqy9vn

Martin Truex Jr. had a surprise captured on one of his trail cameras. Safe to say, Truex is already looking forward to deer hunting season!

HP at its finest!!! pic.twitter.com/0GasyYXW6F

Clint Bowyer had some fun off the track over the week. Bowyer posted this photo, telling everyone that horses is the best kind of horse power available. It would be very interesting to see Bowyer guide a horse-powered wagon!

Best seat in racing. Top row of the new @DISupdates. This is a game changer. pic.twitter.com/XQp7pwAasI

Jamie McMurray spent some time at the track this past weekend checking out the new views at the 2.5-mile Daytona International Speedway. As part of the Daytona rising project, a series of remodeling phases at Daytona, McMurray climbed the steps up to the new grandstand section and snapped this selfie. Appears to be a fantastic view!

We better race now because I've drank enough coffee that I'm for sure not going to sleep! #letsrace

Kevin Harvick spent the rain delay on Sunday evening drinking coffee, according to this tweet. Harvick is very lucky that the race wasn’t called because he would have probably been up for the remainder of the night. It also probably came in handy since the race did not conclude until almost 3:00 a.m. ET.

If they waited much longer, the team's would've had to replace their 4th of July paint schemes with Christmas ones.

During the rain delay, NASCAR Wonka posted this tweet, suggesting that if the race doesn’t start soon, teams will have to change their Fourth of July schemes over to Christmas schemes. We’re thankful that the race was able to be completed before Christmas.

When you're starting at 11:35 p.m., discussing who the "sleeper" might be could prove dangerous. #nascar #CokeZero400

NASCARCasm caught something interesting during the broadcast last Sunday night. When NBC started talking about possible sleepers during the race, meaning underdog drivers who could potentially win, he posted this hilarious tweet.

So thankful that everyone suffered no serious injuries in the aftermath of our event tonight. Proud of the win and the team I'm a part of.

Dale Earnhardt Jr. did something very classy after his victory on Monday morning. Instead of celebrating the victory right away, Earnhardt shared his concerns for driver Austin Dillon and fans sitting in the area where the No. 3 Chevrolet slammed into the catchfence. This is something that not all athletes would do.

Those 88 & 13 crew guys instinctually rushing to check on Austin Dillon was one of the greatest moments in sports this year. Brotherhood.

Marty Smith also shared some thoughts on the crew members who ran out to check on Dillon after the wreck. Smith posted this tweet, saying the move is one of the greatest moments in all of sports this year. Safe to say, we agree with this tweet.

Dillon shared something cool with everyone on his Instagram page. Dillon did some recovery in a cool chamber. The effect is similar to an ice bath that many athletes do regularly. It would be interesting to see what the coolness of this feels like!