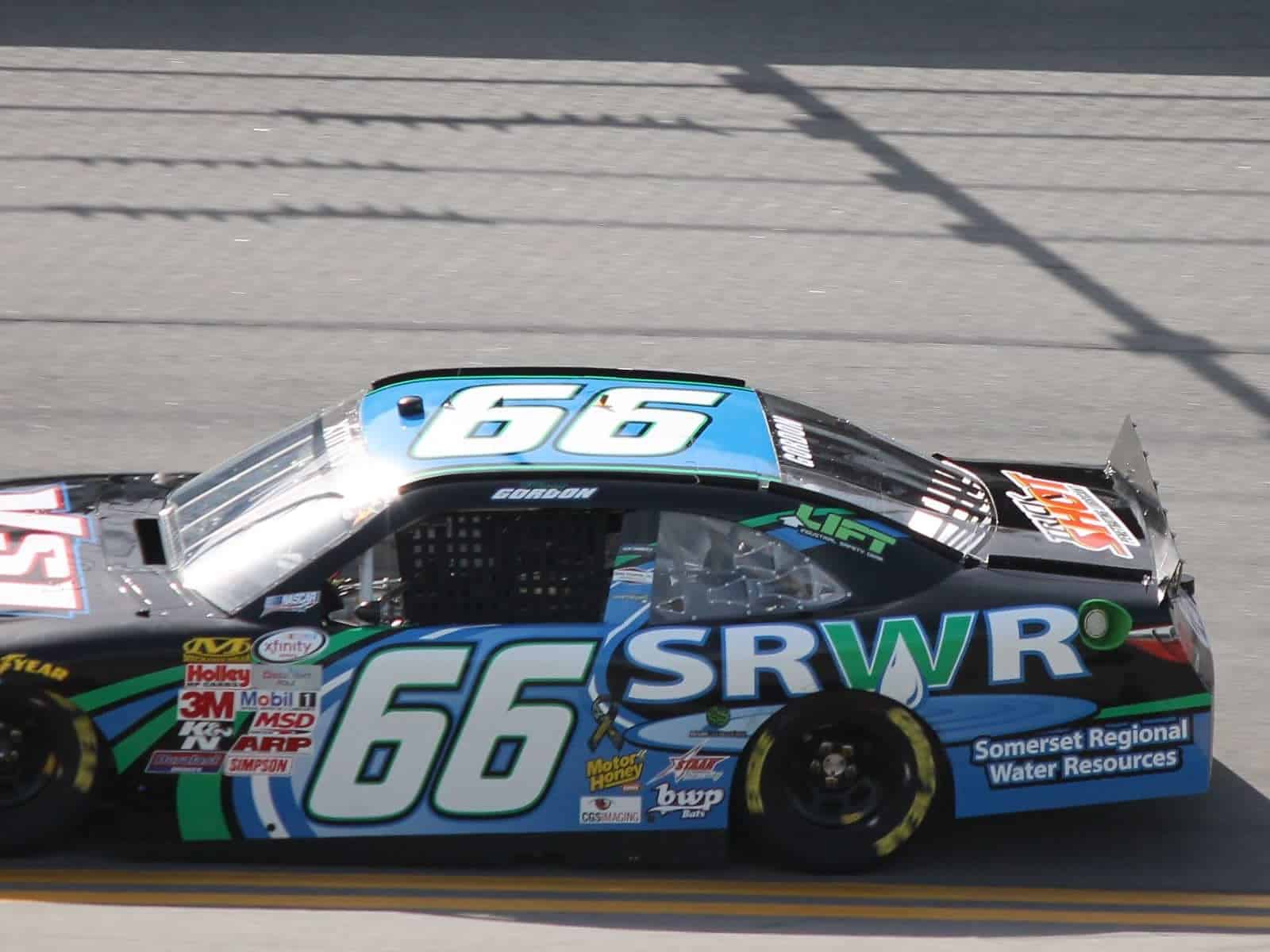 Last weekend saw the public launch of Performance Energy Group (PEG), a new race team that plans to compete part-time in the Xfinity Series. This small operation determined to succeed using an old-school method, and it isn’t the first time in recent years that this method has been tried in NASCAR. Back in 2013, Swan Racing was big on being an old-school team in the Sprint Cup Series. Then, it expanded to two cars with rookies Parker Kligerman and Cole Whitt last year and proceeded to run itself into the ground a short time later.

It’s a real shame, one that has repeated itself many, many times over the years. But Benny Gordon, along with his partner Larry Mostoller, CEO of sponsor Somerset Regional Water Resources, and crew chief Howard Bixman, are out to buck that trend with PEG.

“It was a very good series and I was happy to be there,” Gordon said. “I think a lot of those years were years that if I was going to make a move into NASCAR, that’s when I would have done it. [However], I was happy with what we were doing at the time. We had really good sponsorship, we were winning a lot of races and we were successful. It paid good enough that we had full-time employees and it was a full-time job. It was my living for five or six years.”

Unfortunately, all good things come to an end. Following the death of Robert Brooks in 2006, Hooters slowly decreased its involvement in the series until it pulled out altogether, and since then, the series has fallen on hard times. Today, the series is known as the X-1R Pro Cup Series and races late models. Former Hooters ProCup cars are only legal to race in the Super Cup Stock Car Series, a touring series that competes in the Mid-Atlantic States.

PEG as presently constituted is essentially the remnants of Vision Racing, a team that raced in the Xfinity Series over the past couple of years with Tanner Berryhill as its primary driver before folding earlier this season. In Gordon’s case, he saw something that he wanted when the team shut the doors.

“[Vision Racing] had some Joe Gibbs cars that we were after, so we purchased those cars and leased some engines from Mark Smith at PME Engines,” Gordon explained in Daytona last weekend. “[Vision Racing] was racing on a budget, which made it tough for them to get what they needed to race properly. We’ve picked the program up quite a bit and got some really good full-time people in there in management, plus myself; I’ve been setting up cars and crew chiefing for a long time along with driving.

“We’ve got a really nice program together along with Somerset Regional Water Resources, Larry Mostoller and the team there. We’ve got VSI on the hood of the car, which is the Varischetti family. Two strong companies that, if we want to continue on, they can get us up front where we need to run.”

Both Berryhill, who formerly drove the cars that Gordon will be wheeling, and his father Adrian knew that they had a gem in the team’s restrictor plate car. Unfortunately, they just didn’t have the backing to do it right. Prior to Talladega, Vision Racing put the car up for lease. $45,000 in sponsorship got you the chassis that Gordon used Saturday night for the weekend, which is a 2015 chassis from Joe Gibbs Racing with a leased Toyota engine.

Gordon and Mostoller ended up purchasing the car outright for Talladega, and while Daytona technically counts as the team’s public launch, Talladega was really the team’s debut. It buckled down and prepped vigorously for the event. Gordon qualified 25th for the race, but had to start in the rear after missing the drivers’ meeting. From there, he worked his way up to a 13th-place finish.

With the 13th at Talladega as something on which it could build, the team buckled down and got to work. The soft entrance into the Xfinity Series may be a little too slow for some, but it works just fine for Gordon.

“Right now, we’re in a building stage” Gordon said. “We were getting anxious and [the sponsors] wanted to run a few more races, but I want to keep it to a minimal number of races and let Howard [Bixman, crew chief] build the team, get the right people in place, get the right cars in place, the right equipment and not just start going to races and struggling because we’re not prepared.”

Being 44 years old and a veteran who’s used to owning his team, Gordon’s seen a lot of teams come and go because they were too gung ho about getting on track before they were truly ready. Of course, it’s understandable; racing in its purest form is a very exciting endeavor.

“[Going to the track too quickly] just causes frustration and you’re tearing up equipment, which is costly,” Gordon explained. “Then sponsors go away. I’ve seen it too much in racing.

“There is nothing like preparation. We’ve been preparing and preparing and it shows right now. We ran good at Talladega; we’ve had a good qualifying effort here. Because of our preparation, not getting into the first practice didn’t hurt us. Since our car was right, it allowed us to not have issues or cause a lot of panic in our garage area. I want to keep the focus on building right now until next season.”

Beyond Daytona, PEG’s plan is to continue its soft rollout into the Xfinity Series. As of last weekend, the team was unsure what its official next race would be.

“We’ll probably take another month, build another new car for the next race, which will probably be Bristol or Iowa, one of the two,” Gordon explained. “We’re going to play it by ear and see what we do after [Saturday night]. Then, we’re looking at Richmond and Chicago. Spread it out, get all the equipment, get the team and everything in place. Then, if the financial side of it comes together, go for a full season next year.”

PEG does not represent Gordon’s first try in the Xfinity Series. In 2009, Gordon moved his former Hooters ProCup team to the NXS with sponsorship from the Varischetti family; Frank Varischetti was officially listed as the team owner. Success was relatively quick in coming for the team, as Gordon finished 12th at Iowa Speedway in his fourth career start.

“The [12th-place finish] was with no technology help, just us knowing how to race, we did that,” Gordon said. “It was just so expensive at the time, the economy was crashing and sponsors backed off.”

Once the No. 72 team went away, Gordon dove into the management side of racing before eventually reemerging first in a one-off drive at Bristol with Go Green Racing before joining up with SR2 Motorsports in 2012. There, Gordon drove in one-third of the schedule, posting a best finish of 12th in the season opener at Daytona.

The rest of the season saw Gordon serving as the team’s crew chief for a revolving door of drivers. Casey Roderick did the most races (besides Gordon’s 11) with five. Derek White did four, David Starr three, and a whole host of drivers did one each, including Berryhill, Kenny Wallace, John Wes Townley, former modified ace Tim Connolly, both Amber and Angela Cope, Australian Scott Saunders, Jamie Mosley, Blake Koch and Tim Bainey Jr.

By anybody’s standards, the public debut of PEG was nothing short of a rousing success. Gordon had to qualify on speed and did so with ease, starting 20th. In the race, he drove up into the top 10 early before dropping back due to a so-so pit stop that resulted in him losing the draft. When Cale Conley spun for the second time to bring out a yellow on lap 82, Gordon was able to make up a 30-second deficit and was right back on track. Despite getting caught up in the crash that Brian Scott triggered on the backstretch due to a ill-timed block, Gordon brought his No. 66 home in a career-best fifth.

The Berryhills believed that it was a top-five car. With Gordon at the helm, it lived up to their expectations.

Congratulations, Benny! They talked a bit about you on TV, but you deserved a post-race interview. I don’t think many people realize what a huge accomplishment this was, running up front and finishing there, too! I wish this team good luck for the future; they certainly are off to a great start!

For what it’s worth, they did have Benny in for the post-race press conference in the Media Center Saturday night.