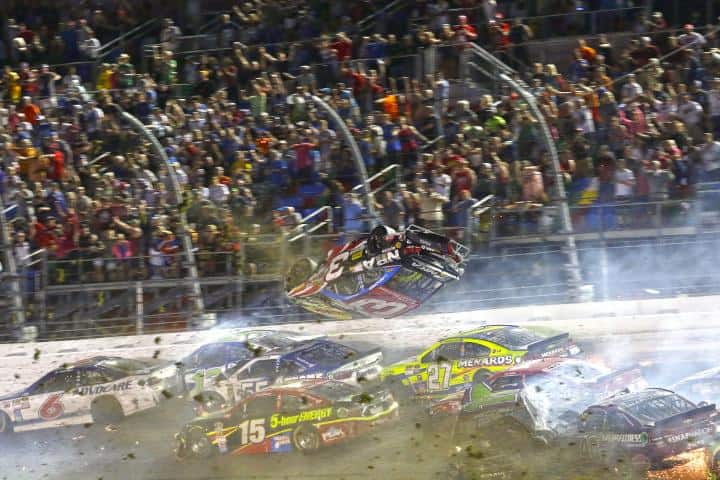 By now we’ve all seen the harrowing television footage, YouTube clips, Vines and Instagram loops of Austin Dillon’s and fans’ brush with mortality in the Coke Zero 400 at Daytona. In the wee hours of Monday morning, following a four-hour rain delay, NASCAR once again whistled past the graveyard of both drivers and fans being critically injured at their marquee facility. As with any traumatic event, knees began jerking everywhere, with everyone searching for a catch-all solution to cars being collected by a catch fence at 200 mph.

It seemed more than a little coincidental to me that the answer to this issue at Daytona was discussed all of race weekend and showed on television several times.

Looking to the cars for a solution has proven a lost cause. Whether unrestricted in 1987 as Bobby Allison nearly parked his Buick in the stands, or a year later with a plate with Richard Petty tumbling along the fence, racecars seem to not understand that they’ve been slowed down and shouldn’t do unpleasant things like that. Despite choking the life out of the engines back in the early-mid 1990s with smaller and smaller restrictor plates, NASCAR was still having problems with cars sailing through the air; namely Rusty Wallace at Daytona and Talladega in 1993, along with Neil Bonnett at Talladega.

Back then, the cars were struggling to break 190 mph in the draft and they were still finding ways to get up ended.

Jack Roush, who developed the roof flaps in 1994, had advocated knocking the banking down 10 degrees and removing the first 10 rows of seating. The former part of that idea is probably not going to fly, and we already have two of those tracks: Michigan International Speedway and Auto Club Speedway. Moving the seats in light of the current seating enhancements, would be the perfect time to address the latter portion of Roush’s vision.

With the advent of new seating arrangements and fan amenities as part of the Daytona Rising project (which was mentioned an average of once every 10 laps during both the Xfinity and Sprint Cup races, plus every pre-race show in between), there will be more vantage points than ever starting with next year’s Daytona 500. So intriguing are the new viewpoints and seating arrangements, ticket sales for the 2016 Daytona 500 are up nearly 20% from where they were a year ago. The seats along the fence past the start/finish line offer fans little more than a great view of pit stops and the roofs of the cars, and these new grandstands will provide a better fan experience both in terms of sight and safety.

I’ve sat in those front-row fence seats before at Daytona; while you do get to look the drivers in the eyes as they flash under the flagstand, I almost got to take a home a few souvenir pieces off of Joey Coulter’s truck following his fence fandango on the last lap of the Truck Series race here in 2012. If we are going to stick with the current format that emphasizes pack racing and a green-white-checkered finish cadence that does not allow the field to get up to speed and spread out after a few laps, we’re going to continue to have these sorts of incidents coming to the finish line at plate tracks.

When DIS decided to remove all of the backstretch seating and relocate it along the frontstretch, some fans guffawed and chalked it up to a gimmick to make the stands look full on TV. Kevin Harvick questioned how they can spend money on moving perfectly good seats, while many areas around the track and other venues were absent SAFER Barriers.

While there can be credence given to those claims, Joie Chitwood and the staff at DIS are obviously onto something.

With ticket sales increasing, they will no doubt spike again following an exciting finish – in the same way getting shot at or being chased by a bear is “exciting” – it may behoove both Daytona and NASCAR to relocate the first 10 rows of seating from the fence from where they are now. The seats that currently occupy these sections could be placed either high along the backstretch again, or continue to expand the short chute into turn 1, or the current section under construction exiting turn 4.

An old adage here is ringing true: happens once, shame on you; happens twice, shame on me. It’s now happened three times in four years in essentially the same spot in all three series. While NASCAR and DIS have both done well to improve safety, 20-feet of gaping fence holes, with tumbling engines, transmissions and front suspension assemblies scattered about, along with 25 other cars following behind in close proximity, this is not a time to high-five each other on getting lucky that nobody, be it driver, fan or security personnel pacing the perimeter of the speedway has been killed.

The speedway has shown it has both the means and the fortitude to begin such a massive undertaking of rebuilding grandstands, installing escalators and elevators, alongside football field-sized fan zones, and now is the perfect time to build more safety into the speedway by removing fans from harm’s way.

Racing never has been and never will be completely safe. Cars and small airplanes can both take off at less than 180 mph, and you can’t do much about launching a car when one is acting like a ramp with two others behind it pushing at 200 mph. What can be done, is at least remove the fan from the danger equation, at two of the most unpredictable and dangerous tracks on the circuit.

The back of your ticket states that you take your chances when you come to a race, just as the drivers do, but given the current trend along Daytona’s frontstretch, race fans shouldn’t have to wear a helmet and firesuit too.

The safety additions probably aren’t included in the tax depreciation that Congress has availed to sports venue
improvements. Why doesn’t one of our finest reporters taken a look at the ISC books and tell taxpayers what it
is costing us to update the facilities. If we are paying for it why can’t we fly a flag of our choosing?

Dan
Reply to  Fed Up

Don’t buy a ticket. That way you know you’re not paying for it. It’s their playground so they can say what flags they would rather not see flown.

Fed Up
Reply to  Dan

Oh, I think US taxpayers are paying for it if ISC is taking depreciation deductions from their
income.

You can bet that Brian isn’t paying for anything. Gotta keep the stockholders happy.

I was at the 1977 500 sitting four rows up about where Dillon hit. It would have been a lot worse then but they had real race cars.

For the 300 the day before we walked to the track in the morning looking for tickets and got top row seats for face value.

You can print anything you want on the back of a ticket and it does not protect you if willful negligence can be proven. The decision to ignore the dangers of plate racing is common knowledge. If and when a fan, or possibly even yet another driver is killed you can be assured that in a country infested with lawyers NASCAR’s historic negligence will cost them a fortune.

Great article but one thing that stuck in my craw was the fact that you said people are making knee jerk reactions to this. This inaccurate. If you visit this site, among others, for any length of time, the complaints have been long and loud from fans and drivers every time they go to one of these plate tracks.

Yet every year a driver gets into the catch fence and fans become at risk from being hurt themselves and all we get from Nascar is a bunch of PR crap like “safety is the utmost important to us”. If safety was so important to them, they would be doing more than adding tire barriers and strengthening the catch fence.

I’m at the point now where I wish drivers would just say they are not racing at these tracks until something is done. This really is on the drivers as they have the power to make change. Maybe more than they realize.