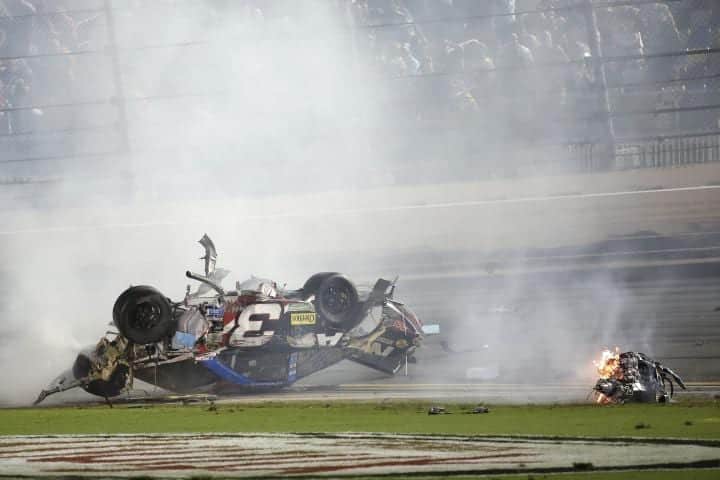 The Daytona Cup race put the governing body squarely in the crosshairs for those seeking to find more issues with the sport – and deservedly so. Let’s run down the quick checklist:

Scheduling the race for any night: check

Starting the race at a ridiculous hour: check

That pretty much sums things up in a lot of ways. That NBC Sports Network did not want to go against fireworks programming on Saturday night, or whatever their reason was, is part of the problem because a whole lot of people had Friday off but not Monday. Sure, why not kneecap your viewing audience?

The wreck has been the thing that has drawn the most attention with calls for investigation of safety measures, people arguing against the sanctity of Daytona and Talladega as well as wondering what can be done about the construction of catchfences. Those elements of the racing are all things that deserve some scrutiny, but let’s all be thankful that no one died.

To see the drivers being interviewed after the race was to see how rattling this type of driving can be and what the wrecks mean to them. With Dale Earnhardt Jr fighting back his emotions and basically ignoring his win, the feeling came across that restrictor-plate racing is gambling and that at some point the house is going to get its money back. Or at least that’s one way of looking at it.

Then there’s the idea that NASCAR got exactly what it wanted. For instance: the first thing that a co-worker said to Happiness Is on Monday morning was, “Hey, did you see that wreck?!”

This question came from someone who does not put any kind of energy into following motorsports. He’s an NFL guy, and outside of that he has just a casual interest in some of the other major sports. Auto racing, however, means nothing to him, and it’s doubtful that he could name any other driver than Earnhardt, Jeff Gordon or Tony Stewart.

But for him to start the day by asking about the wreck is to note how those wrecks gain mainstream attention. That’s something NASCAR must love even if it might be for something as troubling as Austin Dillon piloting a car that got shredded by a fence. The wreck may have happened in the early hours on the East Coast, but there was plenty of time to have it hit the headlines on the morning round of shows and postings.

If someone wants to question something there’s an easier target. Restrictor-plate racing came into the fold in 1988. How come no one has questioned the fact that no one has come up with a better alternative in 27 freakin’ years? That’s a mighty long time to ignore the concept of ingenuity and to foolishly stick with what is a faulty product.

Time to get someone thinking smartly.

Happiness Is… Franchising. Last week, Friday Faceoff on Frontstretch asked about the idea of franchising in the sport, an idea that has been floated about by Rob Kauffman, the person leading the Race Team Alliance and a co-owner of Michael Waltrip Racing. Most of the responses sat on the negative side, claiming arguments like history, the ability of anyone to compete and the notion of it to be detractors from possible future investors.

These arguments are decent but fail to recognize a few things. First, when was the last time that a driver that had no substantial ties to any other organization did anything special?  If you want to go with Alan Kulwicki, that’s not a bad one – but he earned his championship in 1992, and to say that the sport has changed since then in terms of its business and engineering factors would be an understatement. The bigger part of the franchising idea involves the potential for new investors to join. Red Bull last put a significant chunk of money into play in the sport and that turned out just great (sarcasm font for those not paying attention). The sport just is not attracting new ownership money primarily because of the enormous cost of being able to compete for top positions.

When Red Bull shunted its operation, it sold itself for pennies on the dollar, demonstrating the lack of equity these teams have. The No. 88 with Earnhardt in it is worth a great deal, but take him out and it’s just another car. If the sport considered franchising, the worth doesn’t drop in the same way – that is to say, if new ownership wanted in on the sport, it’d have to buy out a team just like owners do in baseball, football or hockey. While new money may not be coming in, franchising may be a way of helping little teams not put their organizations up for sale on eBay or Craigslist if they are feeling the pinch.

Happiness Is… Tinkering. The product at Daytona and Talladega continues to resemble what it has for the past number of seasons, but NASCAR is more than willing to change the specs on the cars at Kentucky, Michigan, Indianapolis and Darlington. The move is the right one as the racing up front this year has been some of the worst in a while. The sad thing is that the racing last year seemed to be pretty decent.

That the governing body has recognized the need and decided to make changes in the cars for some of the races is a positive step – though one has to wonder why just those tracks. But to make alterations to the cars there and not at the plate tracks is a baffling move. The truth is that NASCAR should have mandated a cut in the engine specs by 100 cubic inches and then it would not be battling things like drivers not lifting in the turns and running a tapered spacer.

Happiness Is… Miling. When we last left our IndyCar brethren they were doing their own version of plate racing at Auto Club Speedway. Much like Dillon’s incident, Ryan Briscoe suffered through a wild accident, and thanks to modern safety measures, walked away. This weekend they are enjoying the Sunday space vacated by NASCAR to race at the oldest oval track in the world, the Milwaukee Mile. The flat 1-mile track should allow for something a tad less harrowing yet still entertaining, and they won’t be testing out a new rules package.

Franchising is a conundrum isn’t it. On one hand there is no incentive now for substantial new teams to come in. There hasn’t been one since the Top 35 rule was instituted. And given the long term nature of contracts with manufacturers and drivers its doubtful if you will in the foreseeable future.

Like most businesses I imagine that the megateams, the only ones that matter any more, have succession plans, in place. Almost certainly investors would demand it. Also these companies arent valued because of a particular driver. Drivers, like all employees in every business, come and go. Short term you may sell less tee shirts but that just the cyclical nature of business.

In short it will be interesting to see what comes of this. More fun however will be the why.

Russ, You seem to have more racing knowledge than either the racing press or us commenters. I hope it is not inappropriate to ask, what is your background?

Maybe I just need to shut up, which I suppose is your point. But if you are serious, I’ve been in the racing industry for a while now.

I meant no offense at all. Quite the contrary I actually learn from your postseason. You are obviously knowledgeable and I was wondering where you acquired it.

Lets just say that I have been in the racing industry for quite a while, kept my mouth shut and listened. Perhaps thats why I’ve become such a raging cynic. Today my business, which is in the racing industry,while far from a household name, is about 65% international, doing business from Latvia to Mainland China. There are a lot of viewpoints out there, some of them may even be true.

I think your posts are very interesting & informative — I would like you to continue to post your thoughts.

I agree with Gina and John that your viewpoints are pretty informative and interesting so please keep on commenting.

Russ, do you think that teams learned from the DEI debacle to have such a plan in place when a driver leaves? Seems that company went from being a substantial presence to being an afterthought rather quickly.