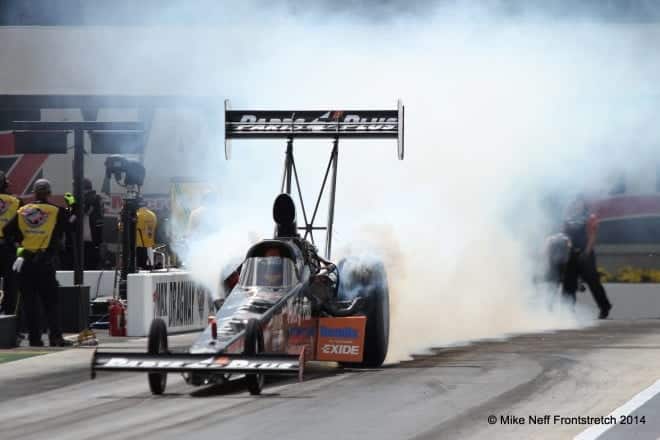 Back in the first column of the season, after some disappointing starts to the year for a handful of drivers, we declared that one bad race does not a bad season make. That’s true. One of the drivers who got out of the blocks slow was Jack Beckman, and it’s worked out all right for him.

Now it’s the midpoint of the season, though, and only six races remain until the Countdown starts. At this point, there are a few teams that really need to step it up if they want to ultimately call this season a success. It’s time for some mid-season progress reports.

This week, Top Fuel is on tap and the drivers flirting with the cutoff line realistically include Shawn Langdon, currently in seventh spot and 121 markers ahead of the 11th-place driver. That margin is not as comfortable as it might be for a team and driver with a slightly uncertain future as the hunt for a primary sponsor continues. Brittany Force follows in eighth, although for her, this represents continuing forward movement in her development as a third-year driver. There was also some sponsorship distraction for her early in the year, now resolved with the addition of Monster Energy to the team.

For JR Todd, who finished second last season, currently ninth, and only 44 points ahead of 11th, this season has absolutely not been what he was hoping for. Chalk it up to a sophomore slump as he is in his second year with Kalitta Motorsports? Or perhaps he’s just a stretch runner. He started last year’s Countdown in 10th. Clay Millican holds down 10th, actually a decent spot for this team as it is not one of the mega teams in the series. Millican has been going rounds and looking pretty good.

Steve Torrence is the first guy on the outside looking in, sitting 11th. He made the Countdown last year and ultimately finished sixth, his best ever points finish, but he’s going to need to step it up if he hopes to come close to that in 2015. Dave Connolly sits 12th, 103 markers behind 10th-place Millican, while his teammate Larry Dixon sits fifth, but for the time being, he gets the benefit of the doubt. Connolly is still learning as he makes the transition from Pro Stock last year to Top Fuel this year.

Check back next week to see who needs to pick up the pace in Funny Car.

2015 – Returned to riding a part-time schedule, won at Gainesville and Norwalk.

2008 – Earned first career No. 1 qualifier at home track in Sonoma.

2006 – Finished a career high sixth in points, scored one victory.

2004 – Scored first career win in Houston, finished in top 10 in points for the first time.

2002 – Scored runnerup finish to Angelle Sampey at Reading in the first all-female final round in Pro Stock Motorcycle history.

Some things most people don’t know about Karen: There have been three final round matchups featuring two female drivers/riders, and Stoffer was involved in two of them. In addition to her final round matchup with Sampey last weekend in Norwalk, Stoffer also faced off against Sampey in 2002 in Reading, with the victory going to Sampey in that round. It would seem that at some point, a deciding rematch might be in order!

In all seriousness, two wins and second in points is not at all what Stoffer was expecting upon her return after taking nearly a year and a half off from racing. Prior to this season, she’d last raced at the U.S. Nationals over Labor Day weekend in 2013.

John Force Racing’s Robert Hight stops by this week to explain how the oiling system works in a Funny Car. The current system on the cars is designed to help prevent fires during failures and also to help keep the majority of the oil off the racing surface.

NHRA doesn’t have caution laps like NASCAR or IndyCar, but that doesn’t mean there aren’t occasional delays in the action. Sometimes it could be for accident cleanup, but more often it’s for an oildown, which happens much as you’d expect, when someone suffers a failure and drops oil on the track. It can take awhile to clean up and can back up a very tightly scheduled day. It’s also a real momentum killer in the action for fans at the track, and in the case of times like this week when coverage is live, for those watching at home, too.

NHRA encourages teams to avoid them if at all possible by levying monetary and points penalties for each occurrence (see Penalties to Go Up for Oildowns in Top Fuel and Funny Car Says NHRA for more details).  So far, Richie Crampton, Jenna Haddock, Doug Kalitta and Morgan Lucas from Top Fuel have lost 30 points each to the oildown penalty, while Jeff Arend, Jack Beckman, John Force, Tommy Johnson Jr. and Tony Pedregon have sacrificed 15 points each in Funny Car.

While parts will sometimes fail no matter what, the idea is to get teams to avoid purposely using experimental or super lightweight components that WILL fail. There are also monetary bonus incentives on tap for teams who DON’T cause them.

Number of career wins for Pro Stock Motorcycle rider Stoffer, the most recent winner in the class last weekend in Norwalk, moving her past Courtney Force to take possession of fourth spot on the list for female victories. Ahead of her sit Erica Enders in third with 16, Shirley Muldowney in second with 18, and Sampey in first with 41. Ironically, it was Sampey that Stoffer beat to score win number eight.

Last chance to see some live NHRA action is this Sunday! ESPN2 will feature the last live broadcast of the season this Sunday afternoon. Don’t miss the Lucas Oil Route 66 NHRA Nationals from Route 66 Raceway in Illinois.