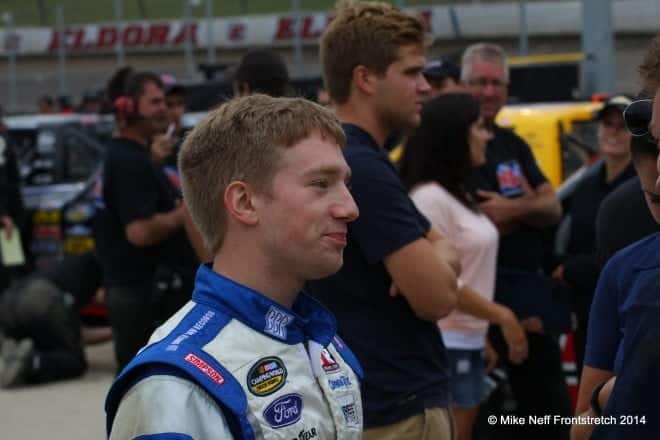 Tyler Reddick entered the Camping World Truck Series with a single start in a Ken Schrader-owned truck at Rockingham Speedway in 2013. After starting 13th, Reddick finished 30th, 10 laps behind the leaders, thanks in large part to an early spin and a lack of speed.

Reddick ran a part-time schedule during his rookie season, though he competed in 16 of the 22 races, and while he never made it to Victory Lane, the driver of the No. 19 Ford really stepped up his performance in the final eight races of the year. He finished inside the top 10 in all but one of those events (Las Vegas – 15th), including a trio of fourth-place results at Chicagoland, Talladega and Texas.

Fast forward to the 2015 season, and suddenly, his name is in the championship conversation with Matt Crafton and rookie standout Erik Jones as he now has two wins and seven top 10s in nine races so far. Reddick took some time out at Texas Motor Speedway to sit down with Frontstretch and talk about the year to date, including switching to mentor for another driver with even less experience than he has.

Beth Lunkenheimer, Frontstretch: How would you rate your season so far?

Tyler Reddick: About the best you can ask and wish for. You’re going to have a few races that get away from you – everyone does – so considering all things, it’s been pretty good so far.

Lunkenheimer: Crew chief Doug Randolph has been a constant for you most of your Truck Series career. How does that benefit you in your development?

Reddick: It’s helped me a lot; we’ve grown a lot together. He’s definitely made it a lot easier for me to adjust to all of these race tracks. He does such a good job with helping me adapt to each racetrack that I just focus on racing even better.

Lunkenheimer: Obviously, a team running as well as you are, your goal is the championship, but what are some of your other goals for the rest of the year?

Reddick: Our biggest goal is trying to win each and every race. We’re not really too focused on the championship right now. It’s just going to come on later in the season, no matter how much we win and how well we do in the first part. We just keep focusing on the next race ahead of us and we have as good a shot as any.

Lunkenheimer: How much do you guys work with the No. 29 team as far as sharing setups?

Reddick: A lot actually. [At Dover] I probably wouldn’t have run top 10 or even come close to winning the race if it wasn’t for the help the [No.] 29 gave to us. We went with pretty close but different packages to Dover, and we ended up switching over to what the [No.] 29 had for the race, and it ended up being the ticket for us.

Lunkenheimer: Is there a difference when someone like Brad Keselowski or Joey Logano is in that truck compared to someone like Austin Theriault with less experience?

Lunkenheimer: What kind of impact has Brad Keselowski had on your success so far?

Reddick: Brad has had a huge impact on this whole team in general. He does a lot to help improve their standings in the Truck Series and everything he does puts us another step ahead of everyone else. His efforts and what he puts into this team definitely has helped me and the team as a whole very substantially. He’s been a lot of help and a great person to go to for advice on each and every one of these racetracks if I ever had a question.

Lunkenheimer: Who were some of your idols growing up?

Reddick: Steve Kinser was definitely my dirt idol, and Dale Earnhardt Jr. was my idol in the NASCAR world.

Lunkenheimer: A couple fun ones before we go. If you weren’t racing, what would you be doing?

Lunkenheimer: If we pulled out your phone, what kind of music would we find?

Reddick: It depends on the day or what’s next in the playlist. It’s just about everything from country music to rock to alternative to hip-hop, pop, whatever it is. I have a little bit of everything in there.

Lunkenheimer: What’s the strangest thing you’ve ever signed for a fan? Author’s Note: The look on Reddick’s face when I asked this question is not one that could be faked or duplicated.

Reddick: I actually can’t say. I really can’t – it’s bad, really bad. I did actually sign a full-size road vehicle. An actual car. That’s probably an appropriate strange thing. I’ve signed a lot of weird things I don’t even want to talk about. Like, I signed it and tried to forget about it.