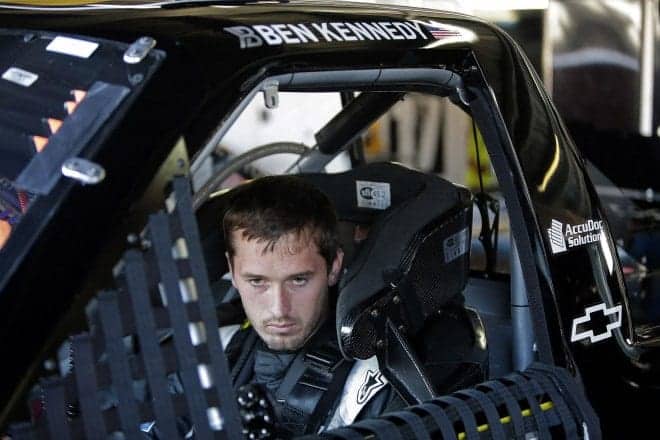 For the second straight week, a vehicle has gone up into the catchfence in a NASCAR-sanctioned race.

Kennedy, 23, was battling with David Gilliland and John Wes Townley in the closing stages of Thursday’s UNOH 225 when he drove across the nose of Gilliland’s No. 92 Ford entering turn 1. Kennedy spun up the track, going above the track’s SAFER barrier when the No. 05 of Townley drove into him.

Kennedy’s No. 11 rode along the catchfence for a brief period of time, destroying two poles in the process before falling back down onto the track and sliding to a stop in turn 2.

NASCAR would call the race five laps early following the wreck, citing the nearly two-hour replacement time for the poles.

“I heard ‘clear’ on the radio, so I moved up to the wall,” Kennedy continued. “As soon as I went to the wall, I got… I guess [David] Gilliland was on my outside, and he pretty much hit me in the right rear and I went up, I guess I was on top of the wall, and I remember being on top of the wall for quite some time. You didn’t really see much, you just saw a bunch of dust and debris flying. The ride from the wall to the ground was pretty hard, but I’m okay.“

“Our truck was really good towards the end, and we pushed him to make something happen,” said Scott Zippadelli, Kennedy’s crew chief at Red Horse Racing. “He went to the outside. I don’t think he was clear enough to pull up, and the No. 92 just hooked him in the right-rear. The rest is history.

“I don’t think it was as [many] Gs as you would expect. It was a twirly, tumbly fence, that kind of hit. It tore the body off of it, but he’s okay.”

Kennedy, the nephew of Brian France, NASCAR’s chief executive officer and chairman, admitted to feeling fear inside of his cockpit.

“Thank God for everything that NASCAR has done to keep this sport safe, because for me to get out of my car on my own power after a hit like that is pretty incredible,” Kennedy added.

“It kind of scares you if it’s anybody, not only your driver, but we build good, safe trucks,” said Zippadelli. “We double check and triple check everything. It’s as safe as it possibly could be, but it’s always a concern.

“I don’t expect to see something like this anywhere, honestly. It’s kind of a surprise with the wall being as high as it is and all. At every racetrack we’re going as hard as we possibly can, so something like this can happen everywhere. You just don’t see it regularly. It’s just a freak thing, really. I think everything’s fine.”

On the positive side: The young man was not seriously injured and, trucks could race IN the stands without fear of hitting a spectator.