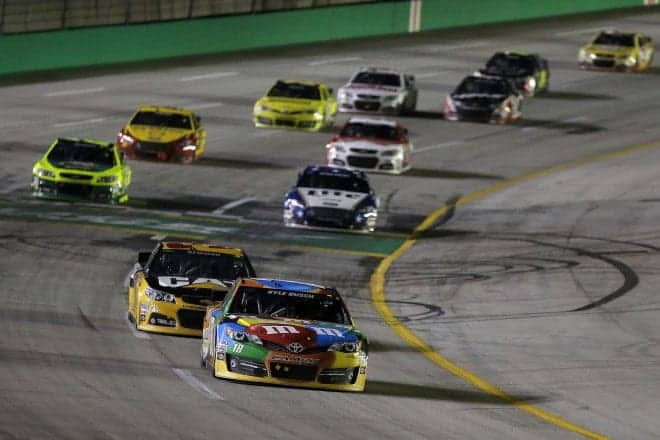 Well, this is the one we’ve been waiting for. After months of anticipation, the much-ballyhooed low-downforce rules package will be making its long awaited debut at this Saturday’s Quaker State 400 at Kentucky Speedway. Yes, you read that correctly: there is actually a buzz around a race at Kentucky. Shocking, I know.

No other story will compare to this one this weekend. Everyone in the industry is anxious to see how a long desired low downforce package will fare in an actual race. Will it actually work as the drivers claim it will? Even if it does “work as intended,” will the difficult-to-please NASCAR fanbase actually be satisfied with the on-track result?

NASCAR’s future is very much tied to the answers to those aforementioned questions, so we’ve got a lot to cover.

1. So… will this new package live up to the hype?

I’ve been writing this column for more than two years now, and in that timeframe, my faithful readers have clamored for massive downforce reductions in NASCAR’s top series. For the first time since at least the beginning of the CoT, those fans will be getting their long-awaited wish. NASCAR is using this weekend’s race at Kentucky as a trial balloon for a new downforce package that has 30% less downforce than the current intermediate track package.

The goal of course is to reduce the aero-push phenomenon that has affected this year’s intermediate track races. Will it actually work as intended? Few actually know.

Here’s what I can promise, though: the racing likely won’t just magically be fixed in one race with the new rules. Small gains in terms of passing, lead changes and each car’s handling in traffic are far more realistic and attainable goals.

So please, keep your expectations in check, and look for small improvements, not large ones. Rome wasn’t built in a day, and that same logic should apply to these rules changes, too.

Any time that NASCAR alters the downforce levels on the cars, certain drivers benefit from it and others are hindered by it. We saw this in 2014 when NASCAR went to an ultra-high downforce package for the intermediate tracks. Jeff Gordon benefited immensely from the high downforce setup. Jimmie Johnson, on the other hand, suffered from it, claiming that the cars became too tight for his liking.

We’ll likely see a similar shuffling of the field this weekend with such a huge downforce reduction on tap. This particular package is very lacking in the rear downforce department, and that means that most cars in the field will be suffering with extreme looseness on corner entry. Guys with dirt racing backgrounds usually benefit the most when those sorts of conditions arise. Johnson, Tony Stewart, Kyle Larson… these are the kinds of drivers who stand to benefit the most from the way the Kentucky package is designed.

For guys like Stewart and Larson, they should be looking at this package as an opportunity. One-off aero packages that shake up the complexion of the field are not utilized very much. Guys who are good with low-downforce cars will thus likely put in some extra effort this weekend, knowing full well that it might be their best chance of a win all season long.

3. Can Jeff Gordon grab a win at his last remaining winless track?

Gordon has accrued some fairly mindblowing statistics over the course of his Sprint Cup career. Four championships and 92 wins are just two of the many impressive feats that Gordon has accomplished in that time, but if he were to win this weekend, he’d add another that is perhaps even more awe-inspiring.

Kentucky Speedway is the only NASCAR Sprint Cup track at which Gordon has yet to win. Should he emerge victorious Saturday night, it would mean he’ll have won at every track on which he’s ever competed. That is an accomplishment that few in the sport have or ever will accomplish.

Despite the fact that Gordon has never challenged for a win at Kentucky, there is reason to believe that Saturday night could be his best chance to do so. Gordon’s greatest successes in this sport came in the low downforce era of the mid- to late-’90s. This new rules package is a throwback to those kinds of cars. That could play into Gordon’s hands, given that few have his level of experience in low downforce Cup cars. If he does in fact win, it would be a historic night for the sport.

4. Have the drivers learned their lesson?

In the 190 mph-plus world of Sprint Cup racing, tire failures can be catastrophic for a race team. Thus, it is no surprise that one of the main concerns that drivers have expressed about implementing the new low-downforce rules package for this Saturday night’s race is, in fact, the tires.

With two test sessions this week already canceled due to rain, the teams have absolutely no idea how the tires will hold up with the new package. That means practice will be the only measuring stick we have in determining the viability of his weekend’s tire code.

All told, if tires become an issue in practice, it could make for a long and wreck-filled weekend for the sport.

4 Answers:
1. No. The 70% of down force left is still enough to give the leader an advantage. NASCAR will still need to throw periodic entertainment cautions for the young ADD fans.
2. No. Stewart and Larson are 2 of the best but they need more than this rule change to correct their course. What they need is a Rodney Childers.
3. I’ll guess no but he is Jeff Gordon driving for HMS so you can’t rule it out. In his old age he is not as aggressive as some and in this age of frequent double file restarts is at disadvantage.
4. I’ll guess no but hold out hope that something like tire management and green flag racing spices up the race. The threat of rain would curtail the entertainment cautions.

I DVRd the truck race last night and started watching. After the fourth caution for no legitimate reason I hit the delete button. I usually FF to the last laps to see the end but I just couldn’t stomach it. I hope Frontstrech will call this crap out again. Who won? Who cares?

I always forget the trucks race on Thursday night but then again that could be my aversion for Michael Waltrip in the booth talking incessantly about nothing that has made me not even look for them on the schedule. I went to the gym which provided a far more important and productive event for my health.

Well, here’s hoping that Gordon will win at Ky, as a fan of his, I’d be really happy. One because he’d have a win and 2 because he’d then have a win at every currently active track on the schedule. It would be quite an accomplishment.

Rain in the forecast – again? Ugh. No idea on the whole downforce thing — NASCAR has had a lot of tries at getting the racing to be side by side & competitive rather than follow the leader parades. Yes, I’m cynical at this point so I’ll believe it IF I see it.

Matt Crafton won. Had you fast-forwarded to see how the race ended you’d REALLY be pissed off.

The NASCAR WAY seems to be. 1) deny a given problem for as long as possible. 2) ignore the problem when it can no longer be denied. 3) take insufficient action and declare the problem solved. 4) go back to step 1) and repeat process. I wonder how many fans, like me, have grown cynical to the point that we do not believe progress can be made until we see it.

Did you get a sneak peak at the secret “rule book”?

I’m wondering how interesting this race at KY is going to be considering that the rain has impacted testing & practice. Maybe that will be a good thing, but who knows?