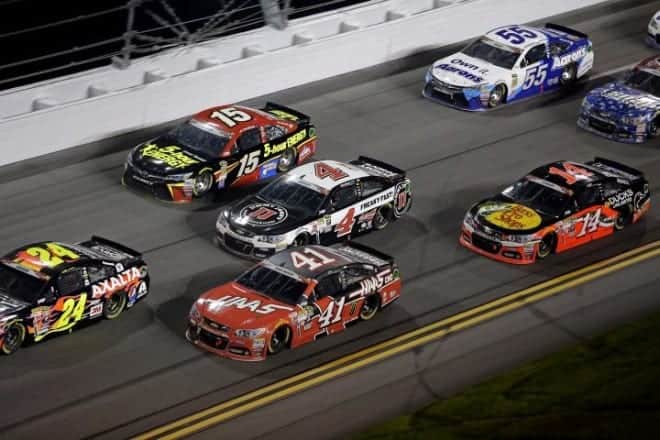 This Wednesday’s edition of The Frontstretch Five explored a few scheduling tweaks I’d like to see NASCAR make for its national touring series. A few fans responded with their ideal schedules, so I’m going to expand on that idea with a revamped schedule that could help the Sprint Cup Series in the long run by changing things up and creating better racing.

While the schedule itself can’t fix aerodynamic problems the racecars, it could reduce the number of tracks where aero dependence is at its worst, replacing them with tracks where more of the racing is in the hands of the drivers. Changing things up could also create excitement by putting certain tracks in key positions; changing Talladega’s second date to the final race before the Chase, for instance, would almost guarantee more action in that race as almost anyone is capable of winning a plate race and there would be jockeying for position to do just that, especially among the smaller teams smelling a surprise Chase berth. Moving that race out of the Chase also takes away the crapshoot element in a title race that already is one on its own.

My proposed schedule does make some track changes, but not a ridiculous number. Even the small number on my list is unlikely to happen, and while it would be awesome to see races at North Wilkesboro and Rockingham, I didn’t include them because those tracks simply don’t have the facilities to host a Cup race anymore and therefore it’s fruitless to discuss them at this point. What I did do is eliminate second dates at most of the 1.5-to-2-mile tracks, add a couple of road courses and a short track and change up the Chase to make it a better test of the contenders.

The Daytona 500 has become the traditional start to the season, though it certainly wasn’t always that way, and it is a good place to start as the damage a plate race can cause in the points in minimized and it’s generally an exciting race for fans.

Moving Atlanta to the second race wasn’t a great move; it’s too cold in the Southeast still and the weather is unpredictable. Though it’s plausible that part of Bruton Smith’s motivation in accepting that date was to reduce attendance in an attempt to move the race to Las Vegas, and it’s a good place to head after Daytona Beach. The West Coast swing generates some good publicity in general, and it’s easier on teams than going back and forth from coast to coast for races, so next, hit these three tracks.

By then, the weather should be more acceptable for an East Coast swing with a pair of back-to-back short track races to ratchet up drivers’ dander.

That could be followed up with another trip west, a mini-swing to…

That leaves Kansas in the same spot it was in this year and adds a road course early on. Adding a pair of road races makes sense; not only have they produced some of the best racing in recent years, but adding a couple also makes sense for teams who build specialized cars that are currently used twice a year yet require a disproportionate amount of preparation. Follow up Kansas with the All-Star event, which in an ideal world would be held at Bristol, Martinsville or Richmond, but is unlikely to move from Charlotte anytime soon.

Because tradition is important in NASCAR, Memorial Day weekend is for the Coca-Cola 600, but a few tweaks afterward might make things more interesting.

The only change there is moving Dover after Pocono and leading into another road course. Yes, that makes four intermediate tracks in a row, but it then sets up a string of tracks that are completely different from one another.

Other than the timing of the Daytona race, that would be the same as it is right now; it works, so there’s no need to fix anything. From there, there would be a few differences from what fans are used to. A return to Pocono is almost a guarantee; the agreement with the track owners for two races dates back to the days of Big Bill France, but by having races of different lengths, teams would be forced to approach them differently.

There’s that third road course, leaving Watkins Glen for the Chase because it’s produced some barn-burners lately, and that’s what fans want to see in the Chase. Iowa adds another short track to the mix, replacing Michigan. That brings NASCAR to Labor Day weekend, which means one race and one race only: the Southern 500 at Darlington. It should be a day race as a hot slick track will put racing more in the drivers’ hands than an easier-to-drive night track, and that at least slightly improves the aero dependence problem. No, it doesn’t solve it, but day racing is generally an improvement over running after dark. It’s supposed to be hard.

And that brings the season into the Chase. The final 10, since it determines the champion, needs to be well-distributed and varied. Opening at Richmond, a track that produces some good solid racing, is a good place to start. It gets chilly in New England, so Loudon stays early in the Chase as a necessity, as does Watkins Glen.

That’s a decent first round; it’s difficult enough to make the contenders work for it and to eliminate the pretenders without being unfair. It leaves the next round with a pair of intermediates, but they’re different enough that they don’t necessarily favor the same teams. Dover is later, but still an elimination race.

The next round sets up the title run and changing a couple of venues here makes sense. Homestead isn’t a great track for the championship race under the current Chase format; it’s too aero-dependent and that doesn’t make for a great finish. It keeps Martinsville as in important step for the remaining Chasers to conquer. A second Chase race under the lights would fall here.

That leaves the championship race, and it was hard to choose the venue. Some have supported Daytona, but the championship is now enough of a game of chance that adding a restrictor-plate race would make it a caricature. Ending it at home in Charlotte would actually be my preference, but it’s already chilly in October and November would be a gamble. Plus, it seems that with the current format, a track that’s not a mile-and-a-half would be a better test of the four top drivers.

While maybe not a dream schedule (and again, that’s just not realistic), this presents a realistic change to the NASCAR season that the sport sorely needs. It adds some tracks that promote different and better racing and it changes others in a way that would potentially make teams approach them differently. Considering the current championship format, that’s important, as it puts an emphasis on adaptability as well as consistency.

While the schedule might not be the big fix the sport needs, it is an area that needs some changes, and some of those changes would improve the product that fans see on the track. There is no one fix for everything, but this one could be a starting point.

I’ll say it again. It is the cars not the tracks. If anything, NASCAR has shown us that they can put on a dull event any time at any place. Shuffling the order of boring races does not begin to address the problem with the current product. Tinkering with the cars however, just might improve the on track product.

Agree, JohnQ, but I also think that looking at the actual “normal” weather and picking dates based on the possibility of good weather is not a bad idea for rejiggering the schedule. Scheduling races in the east during the early spring is always a big crapshoot and it doesn’t take a genius (although NASCAR could use one or two of those) to look at where tracks are located and the scheduled date and say “gee this works better”.

It won’t guarantee that the weather is good but having Atlanta and Martinsville and even Bristol on the schedule in March is just silly based on “normal” conditions.

Adding road courses? How about taking away all road courses and taking the cars back to a factory template with exceptions for safety only. Then we will seed some good racing.