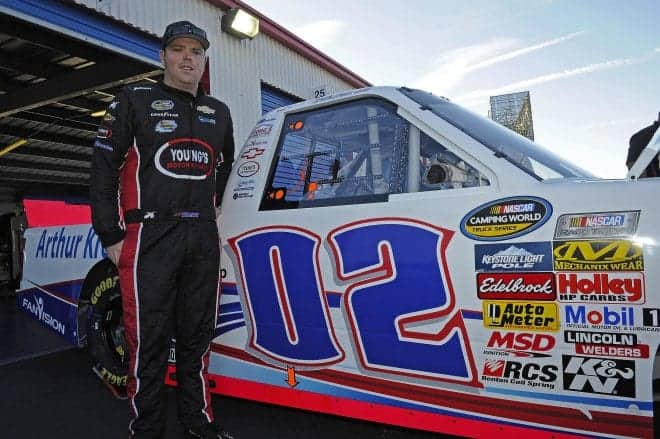 It doesn’t happen that often, so take note: this weekend, you can see drivers make NASCAR debuts in each of the top three series.

As NASCAR rolls to Kentucky Speedway for a tripleheader weekendwith the Sprint Cup, Xfinity and Camping World Truck series on tap (as long as it stops raining, at least), fans will have the opportunity to see a rare thing in the sport, especially on the Cup level, since it’s not necessarily easy to make it to this level of the sport at all, let alone continue on in a full-time capacity.

By the time this article is up (barring, again, rain or other delays) and given that all three qualify their cars and trucks into the field (and that’s not necessarily a given), one will have already made his first foray into the sport, while one each are prepping for Friday and Saturday.

Just who are these drivers? Where did they come from? If you’re even a casual NASCAR fan, chances are you’ll at least know some of the names.

With Thursday’s Camping World Truck Series race from Kentucky a truck short of a full field, that ensured Cody Coughlin‘s series debut – and not just that, he also has no starts in syome of the lower NASCAR-sanctioned feeders like the K&N Pro Series. The Delaware, Ohio, native, who turns 20 in December, will be most familiar due to the name; he’s part of the same Coughlin family that’s been synonymous with NHRA for the past while (the sponsor is family company JEGS, in case you wondered). The young driver first surfaced on the national stock car level last year with 11 starts in the ARCA Racing Series, all for Venturini Motorsports, scoring three top fives and eight top 10s. In 2015, he’s made six additional starts with three top 10s and two poles. Surprise, surprise: he drove for Venturini Thursday, piloting the team’s part-time No. 25.

Not as well-known a last name as the other two, but Tyler Young has been on your radar if you’ve been following the Camping World Truck Series the past three years. Young, who turns 25 next week, has been driving in the series since 2012, starting with a part-time campaign for his family-owned No. 02 that blossomed into a full-schedule effort beginning last year and continuing into 2015. The Midland, Texas, driver is enjoying his best season on the circuit at the moment, scoring his first top 10 at Dover (10th) and with an average finish three spots higher than last year. His jump to NXS coincides with performing a doubleheader; after all, he’s got his normal ride to run this week, too. He’s in the No. 90, a car fielded by either Mario Gosselin’s DGM Racing or SS-Greenlight Racing, depending on the week.

Yep, a Kimmel has returned to NASCAR’s highest series. Will Kimmel, son of Bill Kimmel Jr. and nephew of ARCA’s arguable greatest-of-all-time in Frank Kimmel, will step up to the big leagues Saturday. Kimmel’s certainly popped up on the NASCAR side the last few years, most recently running five races for TriStar Motorsports in the Xfinity Series in 2014. But his bread and butter has been ARCA much as his family name suggests, with no wins over 83 starts but 13 top fives and 28 top 10s for the family team. His ride for Saturday? The No. 32 for Go FAS Racing.