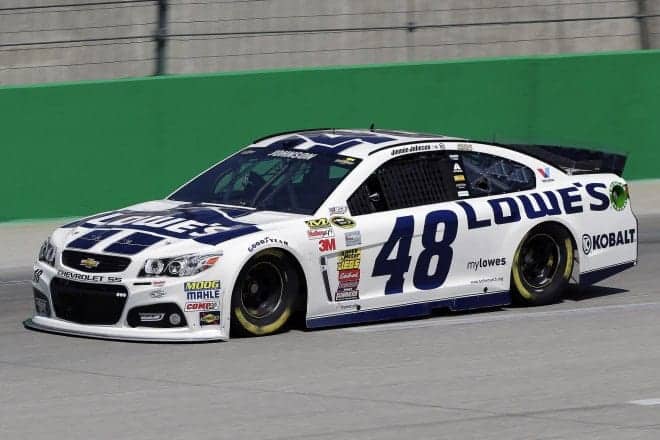 With the late checkered flag at Daytona and the scheduled test on Wednesday at Kentucky Speedway, the NASCAR crew chiefs were too busy to make time for Tech Talk this week. Instead of leaving our loyal readers without their weekly technical fix, we’ve decided to take a look at the new rules and their potential impact on the races at each track announced. The changes for Kentucky have been known for some time but the addition of changes for the Michigan, Indianapolis, Richmond and Darlington speedways offers a cornucopia of possible results when the teams roll onto these track surfaces.

Kentucky has been well known for its extremely rough racing surface for several years. The mile-and-a-half races in 2015 have been less than enthralling, so the sanctioning body has taken a big swing at mixing things up, and the first blush at what these changes will afford is this weekend. The rear spoiler on the cars is going to be reduced from six inches to three-and-a-half, with the reduction of downforce on the rear of the car they are also shrinking the radiator pan from 38 to 25 inches wide, and the splitter overhang on the front of the car has been reduced from two inches to one quarter of an inch. The balance of the package may swing the car from looser to more neutral.

The rules package for 2015 has seen the cars generally trend toward looser than they have been in the past. A smaller spoiler will loosen the car up more but the radiator pan and the splitter are a greater loss of downforce on the front of the car so overall the total package should be more neutral in the long run. The lack of downforce in general is going to be quite interesting at Kentucky. With the bumps in the track already causing the cars to lose traction every time they bounce over one of them, the reduced downforce will cause the cars to have even less traction every time they bounce up. On the bottom line, the cars are going to be even more of a handful at a racetrack that already demands more from the drivers than most of the other intermediate tracks. One thing is for sure: the drivers are going to be out of the throttle in the corners more than they have been all year on these types of tracks.

Indianapolis and Michigan are going to have a package that is going to include more drag on the cars. A nine-inch spoiler with a superspeedway extension on the ends is going to put a lot of metal in the air coming over the car. The front splitter extension will be two inches and the radiator pan is going to be 43 inches. The biggest addition that most people will have not seen for 14 years is a one-inch wicker bill on the top of the car. The disruption of airflow over the car will slow it down even more as it plows through the air. There will be more downforce on the cars due to the spoiler and pan, but the wicker is designed to allow the cars behind to suck up and invoke the slingshot pass.

Longtime fans have bemoaned the lack of passes for the lead. The return of the slingshot pass, probably last seen at Indianapolis in 1997, could certainly quiet some critics. While the passing may increase, there is a very real possibility that we’ll see superspeedway-esque pack racing at Indianapolis and especially Michigan.

Richmond has been an experimentation ground for tires over the last couple of years. The Goodyear folks introduced the multi-zone tire there several years ago. When the series heads to the ¾-mile track to set the Chase field, it will not have the multi-zone tire this year. It doesn’t mean that Goodyear has abandoned the concept, but it is shelving it for Richmond this time around. We’ll see tires giving up again at Richmond, but we won’t know until we get there if they are going to fail and blow out or last.

The final change is the adoption of the Kentucky rules to Darlington. Just as Kentucky is going to be a tax on the drivers’ talents, Darlington is going to be a whole new test for the best stock car drivers in the world. The Lady in Black always offers one of the toughest challenges to the skill of these wheelmen every single year. Throw in a package that does not plant the cars into the track and actually causes them to slide around on a very abrasive surface, and it should all lead to a return of the tire strategy that the place was famous for in the 1990s. Cars are going to scrape the fence and earn Darlington stripes before they ever get to qualifying, let alone the race.

NASCAR is trying, looking to make the drivers have to lift their foot off of the accelerator and even hit the brakes for longer periods to make it through the corners. When drivers lift the ability of some to go deeper into the corner or get back to the gas sooner is what will decide the winner of the races. It will no longer depend on track position and aerodynamics.

It has taken us years to get so far away from the racing of the ’70s, ’80s and ’90s. It will take a few years to get back to it. We’re going to find out this weekend if we’ve taken a step in the right direction when we race at Kentucky.

Thanks for the explanations, Mike. I agree that it will be interesting to see how these new packages affect the actual racing at the different tracks.