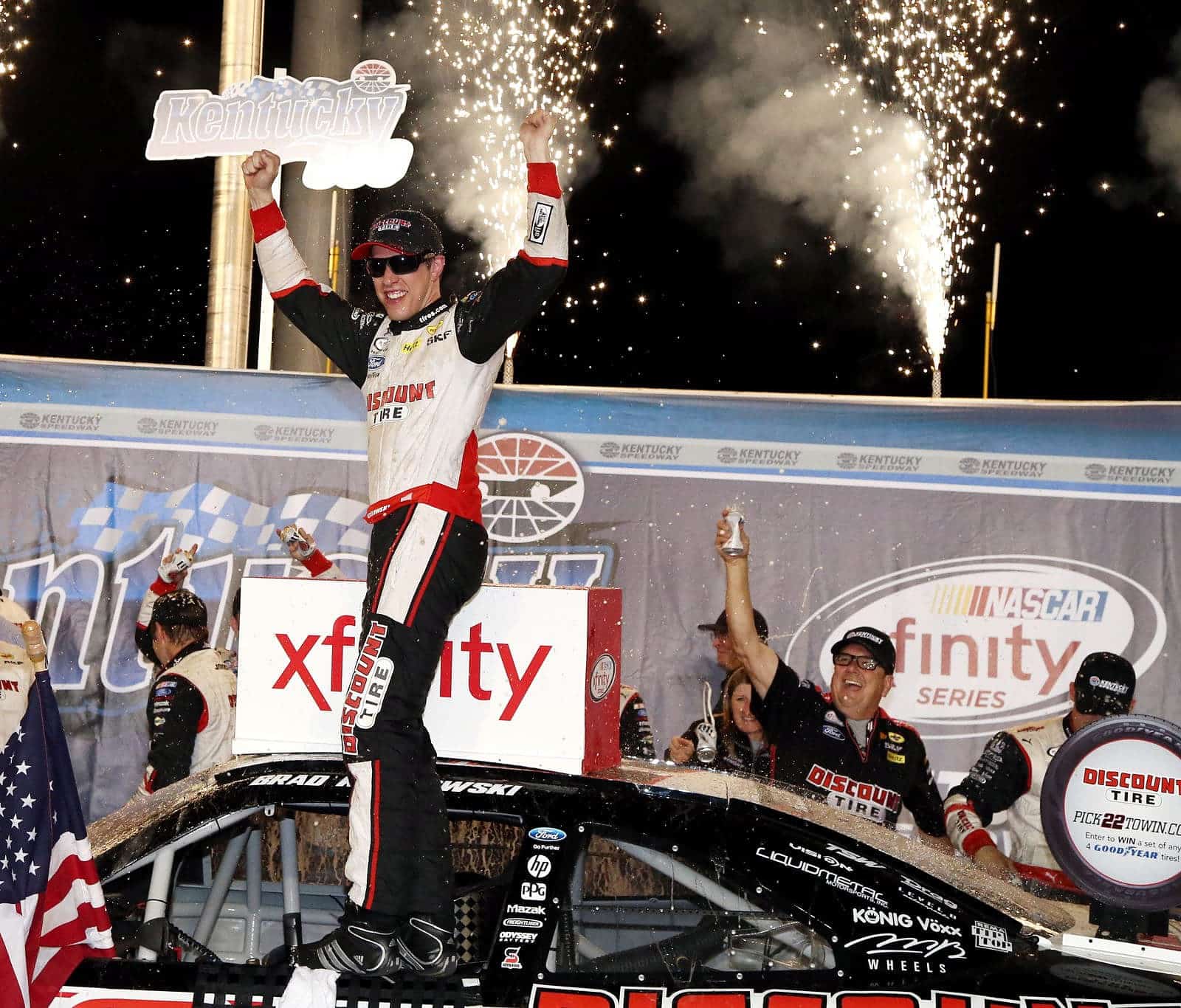 Running a limited schedule, Brad Keselowski had yet to win in the NASCAR Xfinity Series going into the rainy weekend at Kentucky Speedway.

The Michigan native fixed that on Friday night, leading 72 laps – including the final nine – to claim the Kentucky 300, the 50th NXS win for Team Penske.

Keselowski was able to take the win from the fourth starting position after working his way around NASCAR Camping World Truck Series veteran Erik Jones in lapped traffic with nine laps remaining. Jones, who had inherited the lead from Keselowski on a lap 170 restart, got caught behind the lapped car of David Starr coming off turn 4, slowing him and allowing Keselowski to dive under him for the lead.

Jones would work to regain the position, but was unable to work his No. 20 Freightliner Toyota back around Keselowski, settling for second.

Joe Gibbs Racing driver Kyle Busch ended the night in third despite leading a a race-high 88 laps. Busch’s race was lost on pit road under the final yellow, when his No. 54 team elected to take four tires while his competitors took two. Busch would restart in fourth, behind leader Keselowski, and take the leaders three-wide going into turn 1, allowing Jones to take the lead while Keselowski held on to second.

JGR driver Daniel Suarez ended the night in fourth to give the team three of the top-four finishing positions. Elliott Sadler ended an up-and-down night in fifth claim the third top-five finish of his first season with Roush Fenway Racing.

The battle for sixth became an interesting one. In the closing laps, Paul Menard and Darrell Wallace Jr. found themselves in an intense battle for the position. Menard and Wallace were running side-by-side for the position on lap 173 when Menard’s car washed up the track in turn 4, forcing Wallace into the outside wall. Wallace would save his No. 6 Ford EcoBoost Ford, giving Menard a nudge down the frontstretch.

Menard would ultimately win the battle, ending the night in sixth. Wallace would hold on to finish seventh.

Making a rare start, Dale Earnhardt Jr. battled an ill-handling car that he referred to as “wrecking loose” throughout the night before ending the race in eighth. Brendan Gaughan and Regan Smith rounded out the top 10.

There were nine lead changes between seven drivers in Friday’s race. The caution flag fell five times on the evening, forcing the field to run 24 of the race’s 200 laps under yellow.

The NASCAR Xfinity Series will return to action on July 18, when the field head to New Hampshire Motor Speedway for the Lake Regions 200.