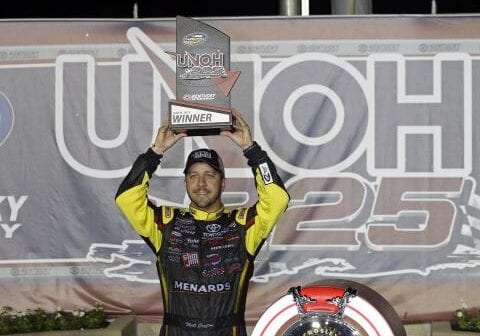 Sometimes storylines get lost for other reasons. When fans read up on the 2015 UNOH 225 at Kentucky Speedway, they will read about the horrific accident in which Ben Kennedy hit the catchfence, causing a massive accident on lap 145, which resulted in the race being called five laps short of the scheduled distance.

What you wouldn’t read about is that two-time defending series champion Matt Crafton won his fourth race of the 2015 season and is on pace for another championship run as he won the UNOH 225 at Kentucky Speedway. Crafton was leading when the caution occurred and NASCAR ended the race to make repairs to the catchfence in turn 1. Crafton took the lead for the final time on a lap 145 restart after the seventh caution flag. He passed leader Erik Jones after a push from Ryan Blaney that helped him get the lead.

Other notables in the field include John Hunter Nemechek in 11th and Johnny Sauter in 12th. Kennedy finished 16th after the incident.

The next race on the NASCAR Camping World Truck Series schedule is the 1-800-Car-Cash MudSummer Classic at Eldora Speedway on July 22.