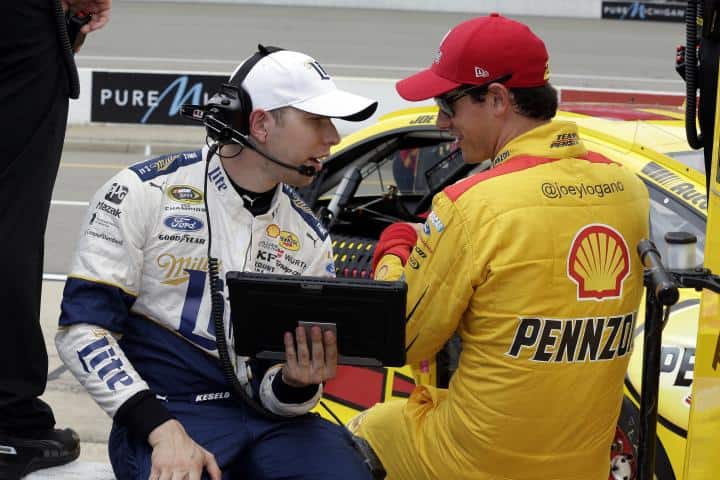 Keselowski, the only two-time winner at Kentucky Speedway, and Logano, the Daytona 500 champion, offered their opinions on the car after a rain-shortened practice for Saturday’s Quaker State 500.

The overwhelming opinion from both drivers was that the cars are difficult to drive.

“They don’t drive good, that’s for sure,” said Logano. “They slide all over the place. What happens in traffic is still probably an unknown, but there was a lot of slipping and sliding around and trying to figure out which way the car is going when you go into the corner is kind of hard. We’ll see.”

“They’re a handful, but it’s a racecar. It should be a handful,” added Keselowski.

Keselowski led the team in Friday’s short stint of practice, laying down a 181.641-mph lap that was good enough for second on the charts. Logano was right behind Keselowski, laying down the fourth-fastest lap at 180.101 mph. Kyle Larson topped the stint, throwing down a blazing 182.537-mph lap.

Despite finally seeing track time, both drivers remained uncertain on how Saturday’s race will play out.

“I don’t know,” responded Keselowski when asked what to expect tomorrow. “Right now, it’s not enough of a sampling to give you a good idea.”

“I feel better than I did with no practice,” said Logano. “I don’t think we’re that far off speed-wise compared to the field. It doesn’t drive very good, but I don’t think anybody’s car drives good. I think there are just so many unknowns that you’ve just got to expect the unexpected at this point.”

If the remainder of practice is rained out, the Penske teammates and the rest of the NSCS will return to the track at 5:45 p.m. ET for Coors Light Pole Qualifying.