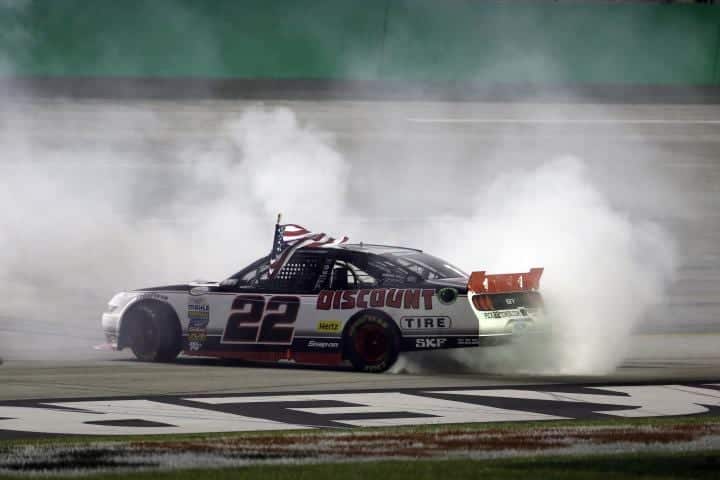 Brad Keselowski captured his first victory of the 2015 NASCAR Xfinity Series season on Friday at the Kentucky Speedway in the Kentucky 300. Keselowski, who made his fourth start of the 2015 season, led 72 of the 200 laps that made up the race.

Kyle Busch had the most dominant car of the evening as he led 88 laps behind the wheel of his No. 54 Monster Energy Toyota. Busch also led three different times throughout the evening. The Las Vegas native fell behind by taking two tires on the final pit stop and went on to bring home a third-place finish. Erik Jones and Daniel Suarez, who are teammates to Busch, both took home finishes inside the top five.

Suarez brought home his second top-five and sixth top-10 finish of the season on Friday. Suarez, a driver from Mexico, took the green flag in the 10th starting position. Suarez would maintain a spot around the fifth position all evening long in the No. 18 AARRIS Toyota. The 23-year old driver came into the race looking to grab a much better finish than last weekend at Daytona.

Sadler carried over momentum from his runner-up finish last weekend at Daytona. Sadler brought home his third top-five finish of the season at Kentucky for the second time in a row. It marks the eighth top-10 finish for the No. 1 Roush Fenway Racing team in the first half of the season. After qualifying got washed out, the Virginia native started the 300-mile event in the 11th starting spot.

Ryan Sieg did not have the Kentucky Speedway on his side going into the race. Sieg, a native of Georgia, came into the evening battling with strep throat. His night would not go his way either as he spun in turn four on lap 71 to bring out the third caution of the night. Knowing he had a lot of work to do with a 22nd starting position, Sieg was able to rebound to finish one spot behind in 23rd.

John Wes Townley also found some trouble when he spun in turn 2 on lap 162. The crash would end his night with a finishing position of 32nd, 42 laps down. It would end up being his second-worst finish of the year in 12 starts.

Brian Scott had some struggles behind the wheel of his No. 2 Shore Lodge Chevrolet owned by Richard Childress Racing. A carburetor issue forced the team to make an unscheduled pit stop with around 60 laps complete. The team was unable to rebound and finished in the 19th position.

Ryan Reed, who won the NASCAR Xfinity Series opener at Daytona in February, brought home his 13th top-15 finish of the season on Friday. Reed started his night inside the top 15 and continued that momentum with a finish of 14th. Despite being 14th when the race ended, he would be the second car to finish a lap down.

Four Sprint Cup Series drivers made the move over to the NASCAR Xfinity Series on Friday at Kentucky. These included Busch, Paul Menard, Dale Earnhardt Jr. and race winner Keselowski. Each of these four drivers will walk away with a top-10 finish.

The NASCAR Xfinity Series will officially kick-off their second half of the season next Saturday at the New Hampshire Motor Speedway. With no points reset, the racing could get much wilder as the series will make stops at some of the most unique tracks they will see all year. These drivers will have to face intermediate, road-course and short-track events as the season comes to a close. They will not get a break until after Kansas in October.