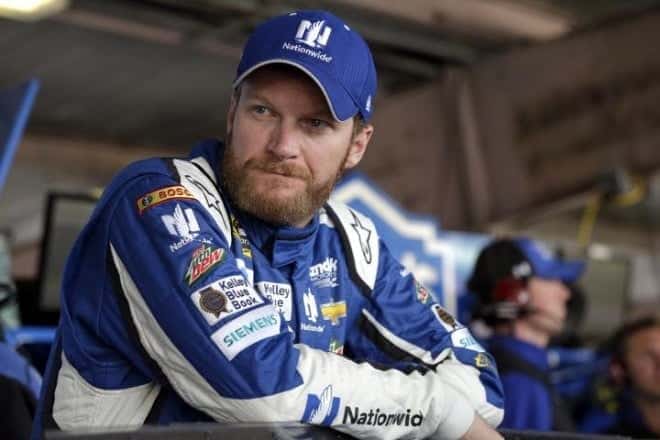 Saturday’s Quaker State 400 saw a track-record 11 cautions, two of which came from NASCAR’s most popular driver.

Dale Earnhardt Jr., who won last weekend’s Coke Zero 400, struggled throughout the night’s 400-mile event at Kentucky Speedway. Suffering from a lack of brakes, the Kannapolis, North Carolina native found himself in the wall on lap 137, and put Danica Patrick in the wall off his bumper on lap 208.

Patrick, who was running inside the top 25 at the time, took offense to the incident, following Earnhardt onto pit road and making contact with his No. 88 Nationwide Chevrolet. Earnhardt would reciprocate the action on pit road, swerving toward Patrick’s No. 10 GoDaddy Chevrolet before heading to his pit stall.

Earnhardt pleaded his case to crew chief Greg Ives, asking him to tell Patrick’s team that he had no brakes. Patrick, however, didn’t accept the apology.

Despite Patrick’s anger, Earnhardt was in good spirits on pit road following the race.

“I was talking to Greg (Ives, crew chief),” said Earnhardt. “We ran our typical mile-and-a-half brake package, and it wasn’t nowhere near enough for what we needed tonight. As slow as we had to roll to get through the corner, to get the car slowed down, we cooked the brakes real fast.

When asked to discuss his incident with Patrick, Earnhardt answered candidly.

“It sucks. I don’t like running into Danica because it gets a little too much attention,” Earnhardt joked. “But I’m sorry for that. We came back down and we bled the brakes and put some new fluid in it, and that actually helped the car a lot. We were able to at least salvage a reasonable finish, considering what we went through tonight.

“We had a top-10 car, maybe not a top-five car. We had good speed, just no brakes. I really had to take care of the brakes. We ran out of pad at the end of the race. It was metal to metal there coming to the finish.”

Earnhardt, who rallied to finish 21st following the incident, wasn’t surprised to hear Patrick wasn’t understanding of his brake issues.

“Of course she ain’t. I imagine she’s not,” said Earnhardt of Patrick, who finished 34th. “What am I supposed to say other than the truth? We didn’t have any brakes going into the corner. I know better than to run into her because she gets so much attention.

“There wasn’t nothing I could do. I mean, as hard as I hit her, what the hell did she think I was going, trying to wreck her? We ain’t got no problem, it’s not like we was having a problem out on the racetrack with her. It’s not like I just drew her name out of a hat and decided that she’s the one I’m going to run into tonight.”

As for Patrick’s actions following the wreck on pit road, the 40-year-old admitted to feeling some frustration.

Despite everything, though, the Hendrick Motorsports driver remained optimistic that the two drivers could work out their differences.

“She’ll chill out,” said Earnhardt. “It happens to all of us. I’m not too worried about it. I’ve got a pretty good friend, so I think we’ll be able to talk it out.”

Patrick denied a request for comment on the incident.

I must preface I could take or leave Junior, it is the “Earnhardt” (Daddy) fan club that is frustrating. Already the hate on Danica is at a high regarding this incident. Whenever any other driver did the same thing..regardless of the reason, those drivers would be done away with on the public firing squad immediately, no question about it. So I don’t think Junior is understanding the problem. It “ain’t” that she famous or something (funny how he said that about her, look in the mirror lately Junior?). It is you hit her…and crickets. I am no fan, and I don’t blame her.

Part of being a race car driver,, particularly a PROFESSIONAL race car driver, is working around whatever problems the car has. Using another car to slow you down to make the corner hardly qualifies as professional driving. While ambivalent about Danica I don’t blame here for being upset.
But since it was Junior I guess its OK.

Some drivers take out the diva because she is the diva. Jr. isn’t one of them. But I do think he could have used a bit more discretion about his speed going into the corner. He knew about his brake problem.

It’s not whether or not she had the right to be pissed about the deal………………she did……………..it’s more about learning to control her temper afterwards. She’s taken a lot of cars out of action during her NA$CAR years but you rarely hear an apology out of her either. NA$CAR must have taken a dim view of her actions as they told her on the radio if she does it again her night is over.

I guess Danica like other drivers suffer from some sort of memory loss issues. She forgets that Jr gave her first
big break in NASCAR. Maybe she needs to go back to Indy cars where she floundered most of the time and blamed others for her own miscues like she has here in NASCAR. She came into cup series too quickly. Maybe sending her down to the Xfinity and truck series for a season or two would the best thing for her at this point.