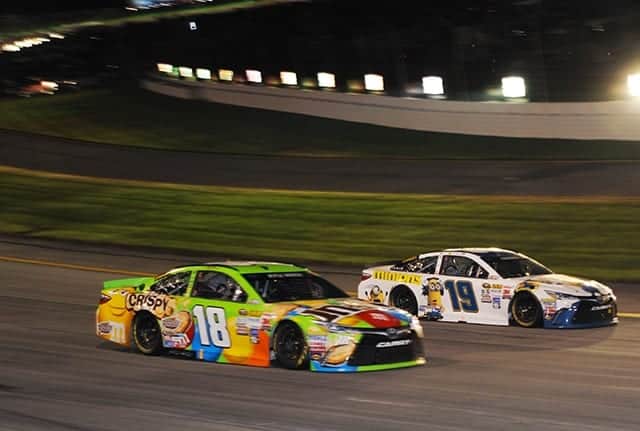 It’s impossible for anyone with two eyes to argue that Saturday night’s race at Kentucky Speedway was the best the sport has seen since it began racing at the track four years ago.

Although some might argue better racing at Kentucky was a low bar to clear, it still baffles me how anyone can claim NASCAR racing isn’t good regardless of the track or aero package. I like racing. Bike racing. Boat racing. Car racing. People racing. It doesn’t matter to me what is being raced it’s just a love of competition. As I told one of my colleagues, if there were two senior citizens battling it out on Hoverounds at a nursing home, I would find it was interesting.

Because of the new aero package I took a different approach to covering the action this weekend. Rather than staying in the infield media center, I went outside the track to turns 3 and 4, giving me a different perspective where I could see battles for position that weren’t shown on TV.

Although I didn’t notice large pack racing at the track level, when I went into the stands and watched from the fans’ perspective I could see groups of cars running together racing to catch the leaders. Another thing I noticed was the number of fans in the grandstands. Yes, it was easy for me to “empty seat watch,” but the crowd was considerably larger than in years past.

At the end of the evening there were 2,665 passes under green-flag conditions and a record 22 changes for the lead. That is more than twice the number of passes from the 2014 race.

Some drivers didn’t like the package and some of the best in the sport struggled to adapt to the looser car. Jimmie Johnson and Chad Knaus had trouble all night. So did Dale Earnhardt Jr., and Denny Hamlin, who went two laps down at one point. Carl Edwards also struggled with the new aero package early in the race, but overcame his issues and finished in the top five.

For its part, Goodyear didn’t have a perfectly matched tire for the aero package but nearly all the drivers said it didn’t make a ton of difference. There was very little follow-the-leader and the cars were definitely out of control at times but it was controlled chaos. The drivers had to actually drive the race cars.

NASCAR will bring this package back at Darlington, but some were saying they would like to have it again this weekend at New Hampshire Motor Speedway. That won’t happen, but if round two of the low-downforce package is as good as the first, be ready to see it at more tracks on the circuit. I will never admit NASCAR’s old racing package was broken, but I’d have to be blind not to see how incredible the racing was at Kentucky Speedway.