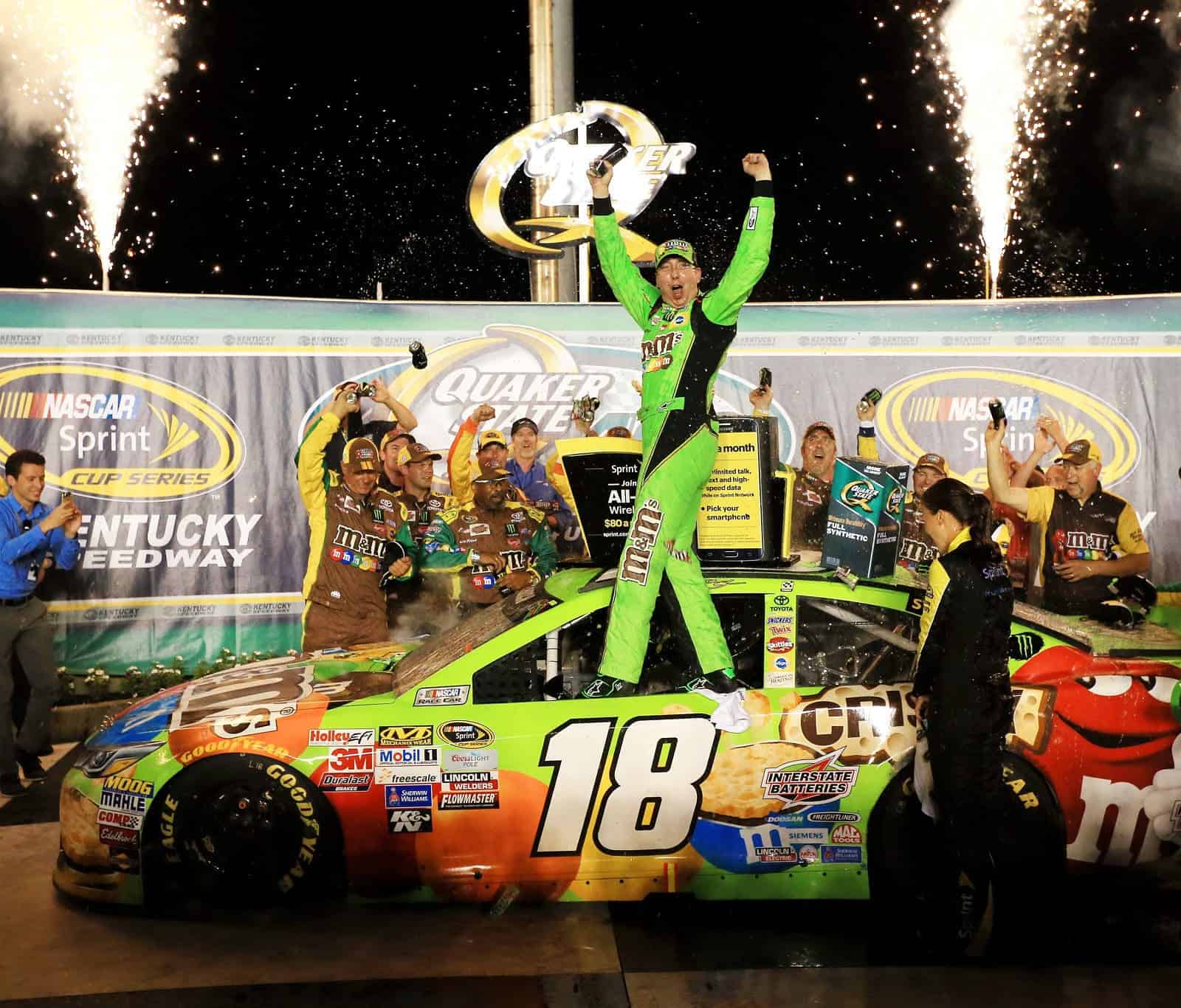 On a hot Saturday night in Kentucky, the miraculous run occurred.

Busch, winner of the inaugural NASCAR Sprint Cup Series race at Kentucky Speedway in 2011, worked his way around Joey Logano in the closing stages of Saturday’s race and pulled away over the final 20 laps to win the Quaker State 400.

Logano, who took the top spot for the first time on a lap 225 restart, was forced to settle for second, finishing 1.594 seconds behind Busch. The runner-up result is a career-best for Logano at the 1.5-mile track.

Denny Hamlin overcame early pit-road issues to finish in third. The Virginian was running inside the top 10 when he was forced to come to pit road on lap 72 with an unraveling tire. A speeding penalty on the ensuing trip to the pits left Hamlin two laps down, but he was able to fight his way back to score a top five.

Carl Edwards and Matt Kenseth came home in fourth and fifth to give Joe Gibbs Racing four of the top-five positions, their best run of the season.

Keselowski, who appeared to have a dominant car, was forced to settle for a sixth-place showing after suffering a myriad of issues on pit road, including his tire changer falling down in front of him, and a 17-second stop during the race’s final round of pit stops. The Michigan native was forced to work his way through the field on three separate occasions during the 400-mile event.

Jeff Gordon ended his final race at Kentucky Speedway in seventh, leaving the track as the only active Cup track that Gordon will never conquer.

The stars of the Cup series entered Saturday’s race uncertain of what would happen. Racing a new, low-downforce package for the first time of the year, the drivers hadn’t ran side-by-side during the weekend’s practice sessions.

When the green flag finally waved, the drivers put on a show different from races seen in the past at Kentucky Speedway. There were 2,665 green-flag races, easily surpassing the record 1,147 passes seen in 2014. There were a track-record 22 green-flag passes for the lead.

There were also a record number of cautions. Struggling with the handling of their cars, some of the biggest names in NASCAR found themselves involved in crashes throughout the night.

Dale Earnhardt Jr. suffered through a rough evening. Earnhardt, the winner of last week’s Coke Zero 400, struggled with a lack of brakes throughout the night, bringing out a caution flag on lap 137 when he slid into the turn 1 wall.

Earnhardt’s brake issues came to a head on lap 208, when he slid into Danica Patrick’s No. 10 GoDaddy Chevrolet, forcing her into the wall and bringing out another caution. Both drivers would continue on, making contact on pit road under the yellow. Earnhardt would finish in 21st, while an angry Patrick would come home in 34th.

Kurt Busch, Tony Stewart and more drivers were involved in incidents throughout the night, forcing the caution flag to fly a race-high 11 times for 49 laps.

While his competitors encountered issues, Kyle Busch kept himself up front, running no worse than fourth throughout the final 100 laps of Saturday’s event. When the Las Vegas, Nevada native made his way past Logano with 20 laps remaining, he set sail, cruising to the finish.

Busch, who has ran only seven of the 18 NSCS race in 2015 because of injury, now has two wins on the year. The 30-year-old sits 87 points behind 30th-place Cole Whitt in the standings, with eight races to close the gap before the beginning of the Chase.

The NASCAR Sprint Cup Series will return to action on July 19, when the field heads to New Hampshire Motor Speedway for the New Hampshire 301.

Congrats to the engineers at JGR, and to a slightly lesser degree Penske. Looks like they did the best job of solving the aero changes at Kentucky. The next race will be among the teams which will be working to find additional downforce before the next race using that package.