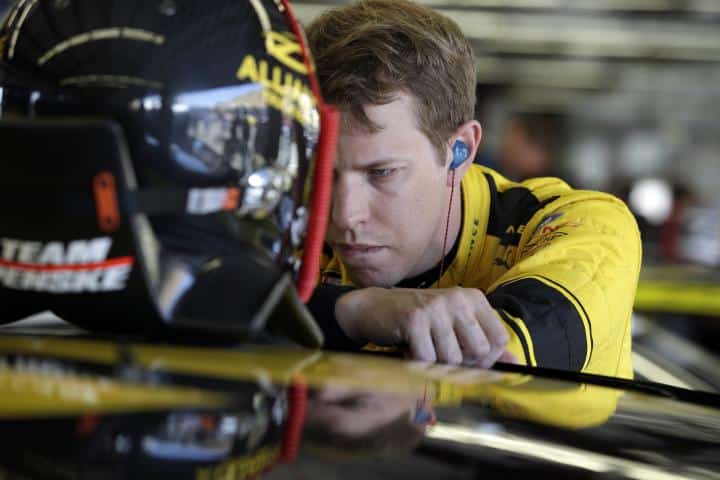 Brad Keselowski had a dominant car in Saturday’s Quaker State 400 at Kentucky Speedway.

Then, he had to come down pit road.

Keselowski pitted from the lead under yellow on lap 32. At the urging of crew chief Paul Wolfe, the driver of the No. 2 Miller Lite Ford took four tires while the leaders took two. Despite losing track position, Keselowski fought his way through the pack, regaining the lead on lap 95 and dominating the next 30 laps.

Keselowski led the field to pit road again under yellow on lap 125, and his pit road woes began.

The race leader appeared to have gotten a quick pit stop from his Team Penske crew, but right-front tire changer Ryan Flores fell down in front of him, forcing Keselowski to stop to avoid running him over.

“He was about to be road kill for a second. I’m glad he wasn’t,” said Keselowski.

The move left Keselowski behind the field again, but again he fought back, climbing inside of the top-five on the ensuing run. When the field came to pit road under another yellow on lap 209, Keselowski talked with crew chief Wolfe and decided to take four tires.

Again, his team had issues.

Troubles with equipment left Keselowski sitting 15th on the ensuing lap 213 restart after a 17-second stop. The Michigan native would drive through the field once again, but stalled out in sixth after reporting that he felt like he had a tire going down.

Kyle Busch would go on to win the race, while Keselowski never rose above sixth.

After letting a win slip away, Keselowski was left disheartened.

“It’s easy to play Saturday evening quarterback, but it just didn’t come together for us,” said Keselowski, who was the defending champion at Kentucky Speedway going into Saturday night’s race. “There are certainly some things I could have done better and we didn’t have the best day on pit road.

“It’s something to build off, but I thought Kyle and I both had pretty good cars and we just didn’t put it all together when it counted.”

While he let this win slip away, Keselowski understood that having the fast car doesn’t guarantee a win.

“I won California and I definitely didn’t deserve to win that one, so it goes both ways,” said Keselowski.

Yes, pit road mistakes are costly and were costly. At least the racing was a “little” better, as the guys post race said..it’s Kentucky..lets see what happens going forward. As they say..one race does not make.

I thought the exact same thing.