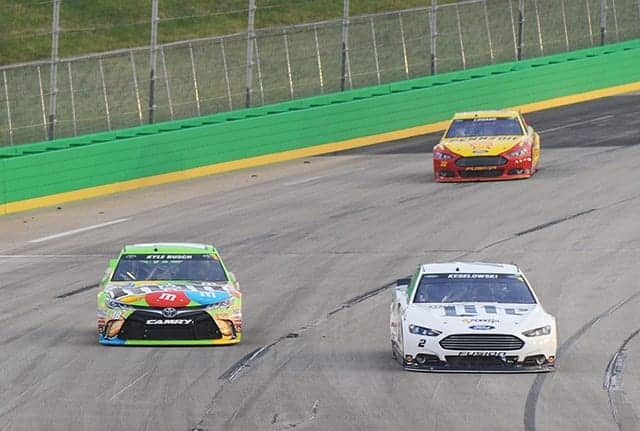 Life is all about little miracles and happy little surprises. Running into an old friend you haven’t seen in a while, getting all green lights on the morning commute…

…or an exciting race in an event full of unknowns and uncertainty.

As the Sprint Cup Series rolled into Kentucky Speedway last week, everyone knew this was going to be the weekend that NASCAR pushed the teams to use a new rules package to try and create more exciting racing on intermediate tracks. This change included shortening both the rear spoiler and front splitter in an attempt to reduce downforce, a change that was supposed to encourage more passing and allow the cars to remain closer to one another. In other words, the goal was to create disparity on the racetrack so that there would be actual side-by-side competition rather than the parade-lap style racing that typically occurs on the larger tracks.

And, by all accounts, it was a raging success. Typically, at a track like Kentucky, the cameras pan around the racetrack and there’ll be a straight line of cars. In this race, however, cars were side-by-side throughout the field and the fastest cars were able to race their way from the back to the front. Look no further than the eventful nights of Brad Keselowski and Denny Hamlin for evidence of that.

Another happy little surprise? The drivers and fans actually agreed on the quality of the racing. Monitoring social media, chatrooms, and online communities about racing, there were very, very few negative comments about the racing (a rarity in and itself) and, after the race, very few drivers criticized the rules package.

Common sense might dictate that the highest finishers would love the new package, but the farther back you go through the finishing order, the fewer positive comments you may hear.

Surprisingly, that wasn’t the case. Consider Clint Bowyer, who finished 19th and was never a threat for the lead, yet had nothing but great things to say about the racing.

“Well I hope the fans enjoyed that because I sure did,” Bowyer said post-race. “I thought we were going to have a little better finish there. We were running decent for a while but toward the end I kind of brushed the wall. There wasn’t really any damage but after that the handling just wasn’t the same. Not sure what happened but we worked hard tonight and proud of the effort.”

Or Ricky Stenhouse Jr., who finished 11th and admitted the car didn’t have the speed to compete with the leaders, but was also a big proponent of the racing this package produced.

“It was definitely more fun,” said Stenhouse. “I hadn’t had that much fun in a while sliding around. I feel like that was what I was born to do. That’s what I grew up doing is sliding around, turning right, turning left, playing with the throttle. I thought we could add a little bit more gear and that would be more beneficial, but I really liked it.”

And, of course, eventual race winner Kyle Busch is a big fan too.

“I think the aero package lended itself to options for us drivers to be able to move around and try different things,” said Busch. “When I got to Logano there late in the going I knew he was going to come up and block my lane and take my air. But when he did, it wasn’t as bad as it has been with I think the other aero package where you just stall out and that guy can basically manipulate whatever you’re going to do. And I could move down, I could turn down and I could get underneath him and we kind of swapped the lead a couple times for a couple laps and then finally I was able to get by him and move on away. But overall, hopefully all the dryers enjoyed it.  I guess I did the most because I won.  But it feels good to win.”

The numbers and statistics from the night added to the overall adrenaline rush as well. There were a total of 2,665 green-flag passes on Saturday at Kentucky as opposed to 1,147 in the 2014 event.

That’s not to say that the package was perfect, however, and several drivers offered up suggestions to continue to improve it. One such change was to remove the driver’s ability to adjust the track bar from inside the car, a new feature that was added this season in an attempt to give the drive more control with the handling of the racecar.

“I don’t know what these guys think, but to me it seemed like as the runs went on, people got everything dialed in and it did become harder to pass,” said fourth-place finisher Carl Edwards. “So I second Matt [Kenseth]’s opinion. I think the driver adjustable track bar really if you get rid of it, it makes guys have to suffer longer until they can get to work on their car and that’s what you want.”

“I think you make passes by figuring out the weakness of the person in front of you and how you take advantage of that,” said Logano. “If you can fix that weakness, pass somebody, I think eventually maybe we can get that out. But it’s in there, that’s the game for everyone, it’s the same for everyone, but it does take a lot out of the crew chief’s hands during the race and most passes are made from cars that are ill-handling and if you can crutch it to the next stop, I think it doesn’t help the racing, but it’s there, I think we’re all handling it fine. There’s also times that you can fix your car to try to pass cars and make passes. So, it can go both ways.”

Busch and third-place driver Hamlin shared similar sentiments, suggesting that allowing the drivers to make adjustments in the car can both improve and decrease passing, depending on the circumstances.

Another suggestion from drivers is for Goodyear to develop a softer tire for this type of racetrack, creating more tire wear over the course of a fuel run.

“You give Goodyear a little bit of time to work on a tire, take away another 700, 1,000 pounds of downforce, we’re going to be racing,” said Edwards. “I felt like a racecar driver tonight.”

With these changes in mind, most if not all, drivers seem to want this package to continue into the Chase, especially considering that five of the 10 Chase races are on intermediate tracks. At the same time, they recognize that a quick turnaround to immediately implement this rules package might not be possible and will require time to develop.

“I think it would be hard to do that,” said Logano about immediately running a similar package this weekend in Loudon. “You’ve got to have a little bit of time. These guys have been working hard on their cars and getting ready. Yeah, it sounds pretty easy, I’m sure, but – and it’s something that we would all, if it happened, we can all figure it out and go with it, and we would be fine. We wouldn’t complain about it. But I would assume that they would say they would have to give us a week at least to kind of get ready. But, hey, if they – if not, we’re good.”

“I think that if it’s something that you want to go with, then you got – you need to give everyone a month heads up,” said Hamlin. “Like we’re beginning of July now, if you tell everyone from August 1 on we’re running the package, it will at least give the teams some time to prepare. I think everyone’s prepared their car for New Hampshire and really if you take the spoiler off there you’re not going to notice that big of a difference.

“I think the tires tuned into that package there and everything,” Hamlin continued. “So, we have been away from home a lot and these team guys are running ragged right now. A lot of them have to turn around and right, go right back to a Chicago test tomorrow. Or on Monday. So, eventually we got to just take a breath and give these guys a break.”

Regardless,I think almost everyone — spectators and competitors alike — can agree that the Kentucky race was a step in the right direction and an indication that, yes, NASCAR is listening. The package will never be perfect, the finishes won’t always be exciting, but giving the drivers and teams the package they need to put on the best show absolutely seems to indicate good things for the future.

The only downside? It’s going to be hard to follow this race up in Loudon. Loudon can be hit or miss in terms of the racing, and obviously the package in Kentucky won’t be present in Loudon. It will be disappointing if this weekend’s race takes the wind out of the sails from NASCAR and the teams in what was almost a unanimous positive response. However, personally, I would rather sit through a few more parade-lap races if it means that NASCAR, Goodyear, and the teams are able to fine-tune this package so that we see similar racing throughout the Chase once it starts in the fall.

If that’s the case, this is going to be one heck of a championship.