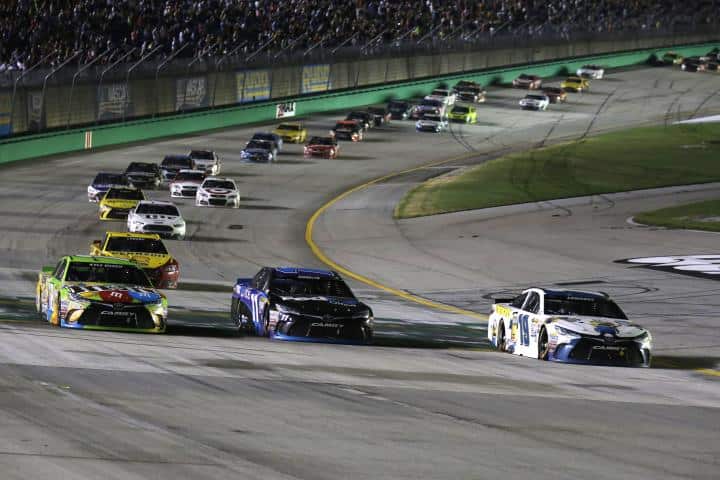 On a night where a lack of pre-race practice with a new rule package threw a curveball that some of NASCAR’s heaviest hitters couldn’t get a bat on, a few drivers who have struggled in 2015, were able to get a good swing in, and while it wasn’t exactly a home run for Ricky Stenhouse Jr., it was a solid hit in what has been a disappointingly lackluster season. His 11th-place finish Saturday night was his best on an intermediate track this year and his best overall since finishing fourth at Bristol three months ago. The two-time Xfinity Series champ hasn’t found the Sprint Cup Series to be so kind, but he made a good run happen this weekend.

NASCAR’s revamped rules package made its debut this week (it’ll be seen again at Darlington in September) and produced immediate results in terms of the on-track product, with 22 green flag passes for the race lead. The new package, predictably, saw some teams adapt more easily than others, and that meant a power shift at the top of the heap as drivers like Kevin Harvick and Jimmie Johnson, who have dominated the intermediate tracks this season, struggled with this incarnation of the aero package. That’s almost as good for the sport as the improved racing.

There were still some things for NASCAR and teams to work out. Brakes became a question mark for the first time in a very long time at a 1.5-mile track, most notably for Dale Earnhardt Jr., who got into Danica Patrick after continued frustration with his brakes throughout the race. Competition was less close between teams, and fewer drivers were capable of making a run at the win, which isn’t necessarily a terrible thing, but not great for fans either. Perhaps the biggest issue was the advantage still gained by running in clean air at the front of the pack; that wasn’t fixed by the new rules, and one car dominated much of the race, which isn’t a lot different from previous weeks. Short of getting the front end of the cars up off the ground significantly, there’s not a lot that looks like it will change the clean air problem. The race, taken as a whole, was one of the best we’ve seen on an intermediate track in a long time. The finish? Not so much.

The best part about the new package? Not only did it put on a great show for fans, but most of the drivers and teams seemed to like it as well, posting ringing endorsements on Twitter:

Sounds like everyone, including the drivers liked the new package tonight.. Can't wait to get some really soft tires that fall off a lot!!??

Besides winning, that is the most fun I have had at a mile in a half in a long long time. #Jgr

That was lots of fun to drive. Made it through the gauntlet of turn four 266 times. We never gave up, salvaged a top 10.

Excited for that race that's the whole package with the right tire! https://t.co/Rl2sQz5fDO

Hope all the fans enjoyed our cars sliding around a lot more thought passing and hard racing was way better tonight. #lessdownforce ??

NASCAR will also test a high-downforce package at Indianapolis and Michigan this summer, and while it’s good to see the sanctioning body try to find a solution to lackluster racing, higher downforce rarely produces better racing in a stock car. Lower downforce puts more of the racing in the drivers’ hands, and that’s the direction NASCAR needs to go. Perhaps using the Kentucky package at more tracks before the Chase is something they need to do, not swing back the other way where there has never been a solution.

Kyle Larson had a strong start to the night, running inside the top 10 for most of the first 210 laps, but an unscheduled pit stop with 50 laps to go for bad tire rub did Larson in in his bid for his first Sprint Cup win. The stop itself might not have done Larson in, but his team did not fix the issue and the new tire blew shortly afterward, and Larson got into the wall. The miscreant fender cost Larson a lot; he finished 35th, two laps down.

Brad Keselowski looked to be a contender at times, especially early, and he led twice for 62 laps, second-most of any driver. But late in the race, Keselowski was inconsistent and had handling issues in the closing laps, falling out of the top 10 before bouncing back to finish sixth. Keselowski did take home a jukebox trophy for his in in Saturday’s Xfinity Series race, but defending his Cup win just wasn’t in the cards.

Sometimes something goes down during a race that points out a need for NASCAR to revisit its rulebook. One of those took place at Kentucky when Justin Allgaier got the free pass when the caution flew on lap 136. Allgaier had just fallen off the lead lap not by racing for position, but because he was black-flagged a few laps prior. Casey Mears had been running in the free pass position for most of the run until Allgaier had to come to pit road for passing too early on a restart seven laps prior.

It seems as though the free pass means that Allgaier’s penalty was not really a penalty at all. If anything, Mears was the one who wound up punished by Allgaier’s mistake. At the very least, a driver receiving a penalty during a race should be ineligible for the free pass on the next caution; though making them ineligible for it at all seems the best course of action. There are usually a bunch of cars in line who didn’t break the rules, and they should be the ones to benefit, not someone who lost laps because they did.

Joe Gibbs Racing clearly had the latest rules package figured out the best of any team, with Team Penske a tick behind. With all four JGR drivers in the top five at Kentucky, Busch obviously had one of the best cars in the field. Also, you have to figure that JGR is throwing everything they have at Busch to make up the points he needs to make the Chase. That could be something to watch in the coming weeks as if the organization concentrates too heavily on one team, the others could suffer, and a backslide heading into the Chase won’t benefit anyone.

Busch moved up a couple of spots in the standings at Kentucky and now sits 87 points behind Cole Whitt for the 30th spot. With eight races remaining, that means he needs to beat Whitt by just over ten positions per race, as well as the drivers between him and Whitt in the standings. He should be able to do that, but one more bad race and his title hopes should be over. If Busch does make the Chase and produce a strong title bid, there will be questions, many of them justified, about the eligibility rules—is a driver who did not complete the entire season really championship material over those who did compete in 36 races? And should any driver who wins races and makes the top 30 be eligible, regardless of why he or she missed races? Busch may well force NASCAR to address those questions.

Martin Truex Jr.; Furniture Row Racing: Truex is almost expected to top the small teams these days, and it’s arguable that he doesn’t truly belong on this list, but his 17th-place run in Kentucky was uncharacteristic for the 2015 version of the No. 78 team. It was by far the team’s worst performance in a race where they weren’t involved in a crash; in every other race this year where Truex didn’t sustain crash damage, the team has finished in the top 10. Is it cause for concern? Not really; every team, no matter how good or how well-funded, has an off week. It’s how well Truex and his team recover that will tell the real story.

Casey Mears; Germain Racing: Mears struggled hard early on with the rules package, but he and his team found some speed later on and were able to finish 23rd. While that’s not a great finish, it was better than most of their smaller-team peers and it was good enough for Mears to gain two points positions to move into the top 20. A top-20 points finish would be a great step for the No. 13 team and for Mears, who last posted a top-20 finish in 2008 with Hendrick Motorsports. His team’s other bragging point this week? They finally convinced popular crew chief Bootie Barker to join Twitter.

Allgaier; HScott Motorsports: Allgaier had a solid race and continues to improve this season. He did get a little lucky this week; as noted above, a well-timed caution erased a penalty for jumping a restart which could have been much more costly. Overall, Allgaier’s No. 51 team is making gains; although Allgaier’s average finish is actually a couple of spots lower than it was in 2014, he’s had some better finishes this time around the circuit. Allgiaer discussed his race in a weekly video recap:

Amy, the BIGGEST question every week: did you even watch the race? If you had, you might have noticed Edwards and especially Hamlin, not only trying to pass Kyle Busch, but take him out of the race on the late restarts. How is that JGR throwing everything they have at Kyle Busch? (Unless you meant it literally.) Also, the reason Kyle won is simple: he is the best driver on the track and the new package actually gave some control back to the driver. I know it pains you, but it is best to simply face the truth.

Bill B
Reply to  messengerfm

LOL… One race with the new package and you can declare Kyle the best driver on the track? While I agree Kyle is a good driver it was obvious that JGR hit on the right set up in a race that was kind of a wild card with a new package that none of the teams had much time to work with.