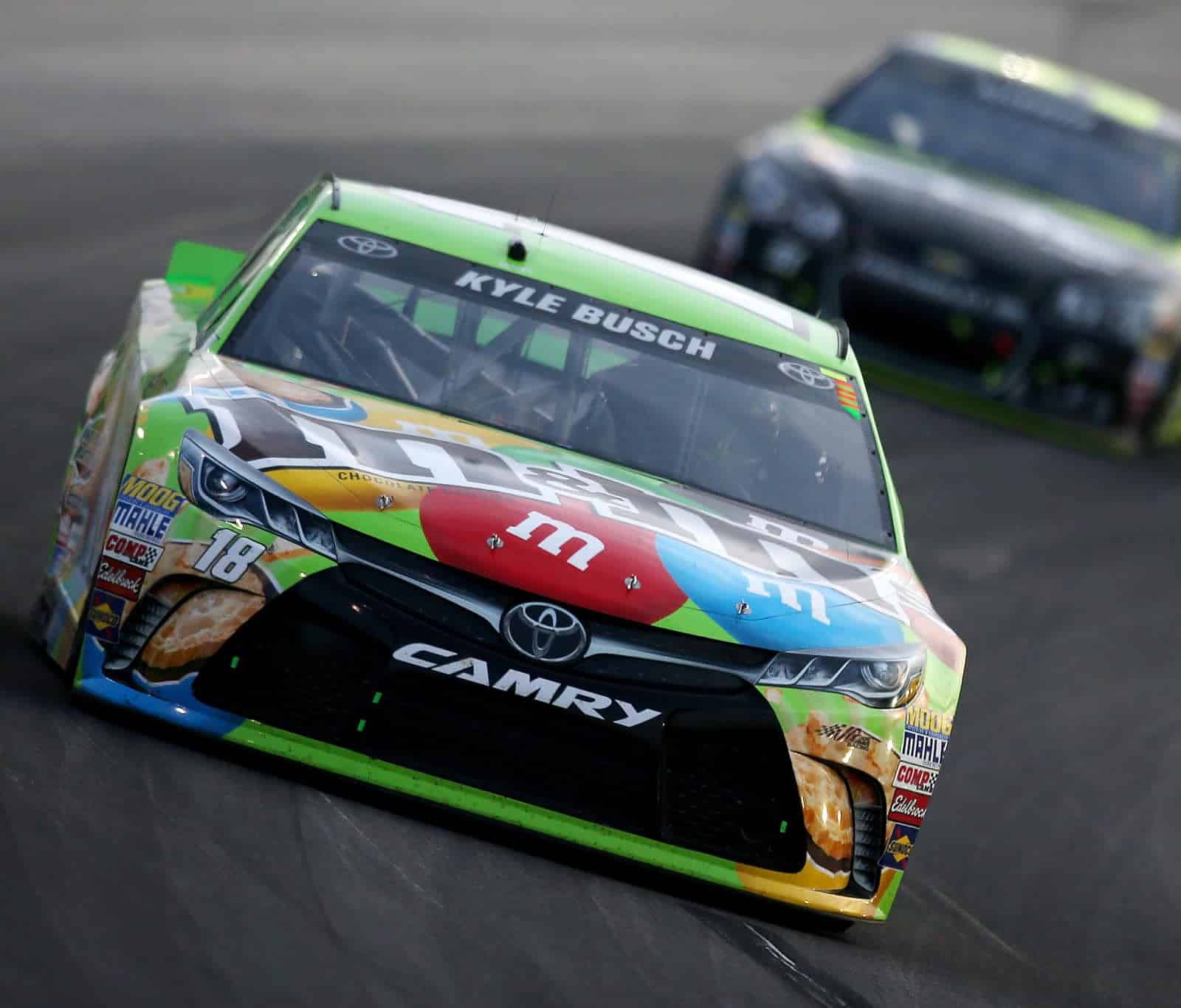 If what we saw on Saturday night is a sign of things to come – if not necessarily this year but next – then I think we can look forward with confidence to some significantly better racing on the much-maligned mile-and-a-half tracks and elsewhere. That the success of the new package also came with significantly reduced testing thanks to two days of almost total rainouts is another reason for optimism. “This is what racecar driving’s all about,” said third-place finisher Denny Hamlin in the post-race press conference. “And I feel like now it’s back in the driver and crew chief’s hands to get their car handling like it’s supposed to. Not just an arms race of who it build the fastest cars in the shop.”

Hamlin wasn’t the only optimist. “Well, I cannot say enough positive things about this direction NASCAR is going with less downforce,” said Carl Edwards who brought his Joe Gibbs Racing Minions Toyota (side note: awesome paint scheme) home fourth. “’I’m really impressed that NASCAR tried this package,” continued Edwards. “Because I don’t really believe this is the package they wanted to try, and so that means the world to me. I think that that’s really cool.” And this is the essence of a changed NASCAR we’re seeing in 2015. There’s more dialogue and deliberation and much less old school dictatorship. At the end of the day, we all, and by “all” I mean NASCAR, drivers, teams, owners, media and fans, want the best possible racing product week-in and week out. Not every race can be an instant classic, everyone understands that, but there’s every reason to believe it could be improved on what we’ve seen these past few years. Nights like Kentucky give me hope that we’re heading, at long last, in the right direction.

We’re exactly half-way through the season and Tony Stewart has just one solitary top-10 in 18 attempts – a sixth-place finish at Bristol Motor Speedway all the way back in mid-April. In fact, his average finish in 2015 is 25.1, and it’s been 59 races since the last of his 48 career victories. And in a lengthy AP interview prior to the recent Daytona race, when asked about his level of confidence, Stewart was bluntly honest: “What’s that? I should Google that and see if I can find the meaning of that word. I don’t have any confidence. If I knew what to do, I would do it. don’t even know what to do to fix the problem. We don’t know what the problem is.”

Given the supreme speed shown by his teammates Kevin Harvick and Kurt Busch and the fact that his problem is so utterly undiagnosed must be a huge concern. At 44 years of age and with three championships and 572 races under his belt, could this lack of form be a sign that time has finally caught up with Stewart? On the evidence of the last 60 some races (remember Stewart missed 15 races in 2013 and three in 2014), you could argue that Stewart’s days as a top-of-the-line stock car driver look very much on the wane, if not already over. All that said, I hope there still a streak of fine form left in him and who knows, maybe a completely unexpected Chase berth.

Next up is the first of two trips in 10 weeks to New Hampshire Motor Speedway. We’ll return to the 1.058-mile flat track for race two of the 2015 Chase making Sunday afternoon a crucial race for those already locked into the playoffs as they can afford to experiment some ahead of the September 27th date. This will be Cup race number 41 at the “Magic Mile” with Team Penske sweeping the last two races at the circuit: Brad Keselowski winning the first race of 2014 and Joey Logano getting it done on the Chase race. Before the wins for Penske and Ford, Matt Kenseth, Brian Vickers and Denny Hamlin picked up wins for Toyota so you need to go all the way back to Kasey Kahne’s triumph in the first race of 2012 for the last time a Chevy went to Victory Lane.

I always like to highlight great new advertising or marketing in NASCAR, as let’s be fair there’s a ton of schlock around in this area. So this week it’s the turn of the M&M’S Crispy Days of Thunder Trailer:

The 2-minute piece pays homage to the epic Tom Cruise movie and stars Kyle Busch, Samantha Busch, crew chief Adam Stevens and Joe Gibbs himself and there are outtakes and behind the scenes interviews as well. This really is a tremendous effort, creative and clever, and importantly something a little different to the driver pitchman type of spiel we typically see. Kudos to the M&M’s marketing folk and the whole JGR outfit who helped bring this to life. Here’s hoping they’re already working on a Talladega Nights version for the October Chase race.

Four to Go for IndyCar

And finally this week, a quick word on the Verizon IndyCar Series which now has just four races remaining in 2015: Iowa Speedway, Mid-Ohio Sports Car Course, Pocono Raceway and Sonoma Raceway for the finale. Atop the standings is one Juan Pablo Montoya – a position he’s occupied since his victory in the first race of the season at St. Petersburg. This past weekend, it was the French veteran Sebastien Bourdais, appropriately born in the town of Le Mans, who picked up career victory number 34, his second of the season. As you may have seen, the race at Fontana a couple of weeks back was one of the most thrilling races I’ve seen in any form of motorsport in a long time. Expect, then, some fine racing across the next month-and-a-half as the season draws to a close. I’ve said it before, I’ll say it again, IndyCar is really worth the watch not to mention the fine coverage Fronstretch affords it – more than worth your time folks, I promise.

The Kentucky race was the best 1 1/2 product NASCAR has had in many, many years. Yesterday, Brain says that they didn’t see the “drafting and pack racing” they wanted. *needle slides off record with big sound* WHAT?!? He’s talked about “close, tight racing” for years. I had no idea this is what he actually had in mind. It would explain why the racing has been so bad and why they kept adding downforce over the years.

I’m really wondering if we, the fans, will ever get some of the racing we want while the Boy Blunder has his hand on the tiller.

Tony Stewart, in 28th place in the points, sits 54 points behind Danica Patrick who is in 22nd place. That’s beyond bad. That’s downright pathetic.

The Crispy M&M’s video was quite entertaining. Thanks.

Dennis, I think Brian really likes the wrecks, not racing. IMO, the answer to your question about will the race fans get what the kind of racing we want with him in charge is “no”.

I think they should use this package or something similar for the rest of the season, not “go back” to the 2015 rules package for the chase. Stupid to put a product out there that was at least interesting to go back to dull and boring for the “championship”.

I don’t think Nascar/BZF cares about the wrecks, but like any event promoter they love anything that generates publicity for the show. And if nobody gets hurt what the heck..

As to Kentucky, I wonder. On the surface, a huge improvement, but the longer it went the more it looked familiar. Why were the JGR cars dominant? My money is they eked out a little more downforce than everybody else with that package. Next time, HMS/SHR will have found more as well and it wont be the same show. SO how will it go with “parity”?

The Tony thing really has me scratching my head. I would think that even if he can’t quite get his feel for this “package” he’d be doing better than he is now…. the man has proven he can drive just about anything. Has he just lost his drive to drive? I guess if anyone does, only he knows. One thing’s for sure after reading his imnterview over on jayski… seems like he thinks Brian is the problem too….
“I’d love to see Brian France show up at some of these council meetings and stuff, but I’m sure he’s busy.”