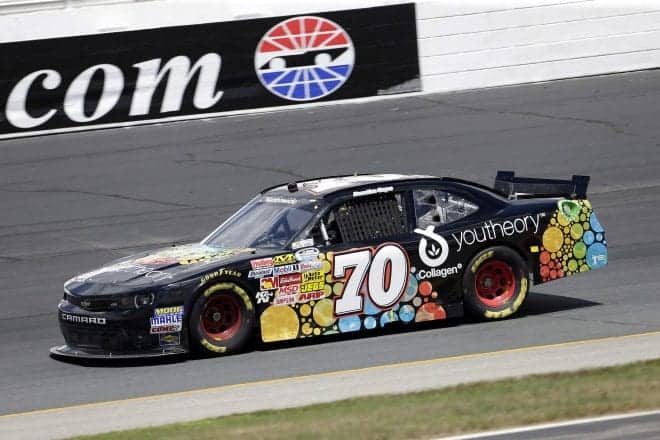 The NASCAR Xfinity Series garage is full of haves and have-nots. The popular section of the garage area is covered with expensive haulers, sponsors aplenty and top-tier equipment from Sprint Cup Series programs. However, for the few people that dare to venture beyond the reflective Team Penske haulers and multi-million dollar teams, there are a wealth of drivers and crews that live off of bologna sandwiches and dreams while they fight to work their way up the racing ladder.

One of the latter teams referred to above is Derrike Cope Racing. Derrike Cope, 56, has raced in NASCAR since 1981. The Spanaway, Wash. native works with wife Elyshia and a crew of less than 10 men to make it to the track each week. Like many in the NXS garage, Cope’s team survives off of hard work and willpower. However, unlike most of his competitors, Cope’s been to the highest echelon of NASCAR.

In 1990, when he was 32, Cope shocked the world by claiming a victory in the season-opening Daytona 500. While he hasn’t won in NASCAR competition since 1994, Cope’s passion and hope for glory continue to get him to the track to this day.

Prior to Friday’s Kentucky 300 at Kentucky Speedway, Frontstretch‘s Aaron Bearden sat down with Cope to discuss his 35-year career, the struggles of staying afloat in a cutthroat Xfinity Series and how his Daytona 500 triumph still sticks with him to this day.

Aaron Bearden, Frontstretch: Obviously the Xfinity Series garage is very young. As someone who ran years ago in the older, veteran-oriented Cup Series, what’s it like seeing the youth movement move in?

Derrick Cope: It’s certainly different, I think. Obviously, times have changed. The youth movement has become really apparent. Drivers are a lot younger even than when Jeff Gordon, Tony Stewart and those types of individuals were coming up. I think NASCAR’s changed from the K&N Series opening up opportunities for young drivers to reach their potential earlier, [that] has led to an influx of a lot of young kids. Parents and families collectively have felt like this is something their young man or young woman could do, and they’ve put a lot of emphasis on them at a young age, and I think that’s what it takes in this day and age to have somebody have that proficiency level at 14, 15 and 16 years old, when we came in at 19, 20, 21 years old.

Bearden: You run your own team now with Derrike Cope Racing. How did that come to be?

Cope: It was really a transition. I certainly had driven for most of my career with Jay Robinson as of late, before I created my own team. I did some driver development a couple years back, doing the K&N Series and some ARCA things. I put a few drivers in the Nationwide (now Xfinity) Series, and then the bottom kind of fell out a little bit, and I wanted to drive myself, so I felt like this was the next step, so I just took the one car I had, and we got another one, and we just started trying to put together some sponsorship to really come out and get the team solidified, and start trying to run a full schedule, which has been a difficult task for a small group of people.

Cope: Your assessment is correct. It’s a top-heavy division because of that fact that there are teams that have the Cup affiliation. They have all of the things in place that the Cup teams have: simulation, access to wind tunnels, seven-post rigs, pull-down rigs and those types of things, and great people. They have a lot of the Cup crew chiefs that have filtered down to the series, so they are very proficient at what they do, and have the resources as well, and the funding is there to finish it off, where in contrast, the teams in the middle of the pack and ourselves are really just showing up without really having access to those avenues like simulation and things. It’s difficult, but we continue to parasite knowledge from people, just viewing what people are doing, and trying to get better, just using heart and desire as our motivation to really try to come each week and increase our productivity.

Bearden: Obviously a big aspect for you is sponsorship. What does your team go through to gain sponsorship? What’s a typical week like?

Cope: Well, Blaise Champion here, and my wife Elyshia, they work very diligently all week long. They do cold-calling. On an average, Blaise does maybe 300-350 phone calls a week to try to procure anything.

They pound the pavement. They’re on the phones cold-calling, which is an art in itself, its very difficult. You have to be thick-skinned. They are very good at doing that – we’ve made small deals with regionally-based companies as well as nationally based companies – all throughout the year. It’s been helping us stay afloat, and we’ve been able to come out and showcase what we can do. We’re in a position where we can show companies from a branding initiative and promotional standpoint with social media and the things that we do behind the scenes as well as hospitality and a VIP treatment scenario. We work really hard in every aspect behind the scenes off of the racetrack, which really helps to get to the racetrack.

Bearden: You’ve had this team now for a couple years, and been able to see it grow. How do you feel the team’s come along?

Cope: I think we’ve had our ups and downs. We pick our fights. Obviously, depending on money and that, we’ve been able to run good at the speedways, and the road-courses we’ve had decent success at. We’ve struggled at the high-speed mile-and-a-half stuff. We have to run used tires, and there’s no way you’re going to compete on used tires except for the speedways. We’ve done relatively well for not having the funding that we need to put new tires on the car. We just do the best we can. Certainly we’ve worked to put more sponsorship together, and like I said, we pick our fights, but I’m pleased with what we’ve done. Aesthetically, we look like everybody else. We work hard behind the scenes as I’ve said, to give people a personal experience that comes as a perception in the market place that we stand out in that regard despite a very low amount of money.

Bearden: You also have been going back to a full-time schedule schedule after running part time in previous years. How has that been personally?

Cope: It’s been rewarding. I think, for me, I really love being in the racecar. I have enormous passion for it – love it to death – and really it’s all I want to do, and I do it pretty much every seven days of the week. I’m the first guy there and the last guy to leave. Blaise and myself and my wife are the three principles that really put every ounce of effort into this. We live and die by it, and we do it week-in and week-out, and there’s no give up in any of us.

Bearden: Being one of the more experienced drivers, do any of the younger guys come up to you and ask you for advice?

Cope: Yeah, some of the younger guys do. The guys that haven’t maybe been there before, but they’re still do a great job. Jimmy Weller’s been one to come up, and Josh Reaume. We try to help out all of the guys that are trying to really come out and put themselves in a position to get to the point where they can become a stable fixture in this sport. Anything that I can do to help them, I certainly try. I love to see young guys come up that have the drive and the passion to do it. I still have it, and I know what it’s like to be in that position.

Bearden: They say that being a Daytona 500 champion sticks with you for the rest of your life. It’s been 25 years since you’ve won. Do you still feel that holds true?

Cope: Absolutely. It still to this day doesn’t matter where we go or what track we’re going to. We stop at a gas station and somebody stops you, from the UPS guy there that says “That’s a Daytona 500 winner.” At a restaurant, the same thing transpires.

It’s very rewarding. Obviously, I’m very fortunate to have had that happen to me at an early stage in my career. It was a life-changing moment, something that elevates your notoriety. I think that it made me a stable fixture in this sport for a very long time, and it really is something that when attached to your name is very significant.

Bearden: They say the Xfinity Series and NASCAR in general is becoming harder and harder to afford. Do you feel that’s true, and if so, what do you think NASCAR can do to try to fix that?

Cope: Well, racing period is not cheap. It takes everything to try to make it and become proficient. It takes a lot of money. From the engine side of things, they do all they can do to try to save costs, but no matter what you do, to be competitive costs money. Money buys speed, and that’s really the reality of it.

Bearden: Lastly, what are you and your team’s plans moving forward through the rest of this year and beyond?

Cope: Right now we have a lot of things coming across our plate, some affiliations and some alliances that we’re trying to work with. We’re just trying to get all of those in place so that we can elevate possibly our engine program and opportunities to get to the racetrack with better things, and just a better overall opportunity to come out and run better. That’s what we’re trying to do is elevate the program in every facet. Right now, we’re hanging tough, and we’re going to continue to strive the be the best we can be.