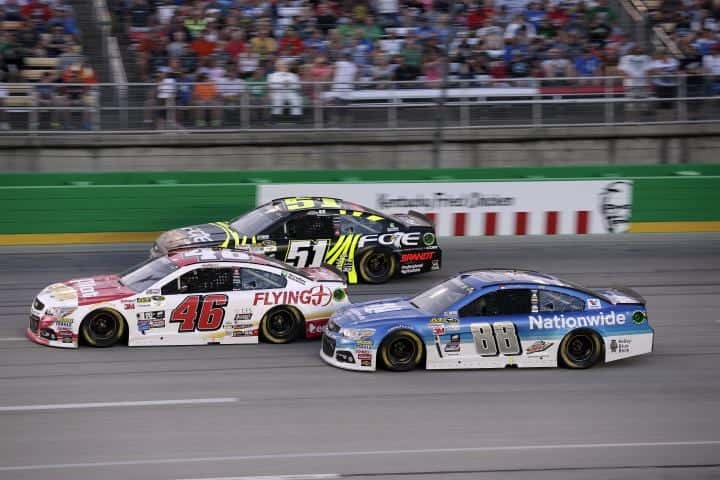 Talk about going into it blind. The stars of the NASCAR Sprint Cup Series dove right into Saturday night’s Quaker State 400 at Kentucky Speedway on an entirely new aero package with very limited track time. The new rules package that NASCAR brought last weekend, along with a new tire compound from Goodyear, pushed drivers to really take control of their machines, which slid around the 1.5-mile oval more than under the previous aero setups.

More downforce and less drag made for exceptional racing the entire night and ended in a thrilling finish, with Kyle Busch narrowly escaping race contenders Joey Logano, Brad Kesolowski and the rest of the Joe Gibbs Racing team in the front of the pack. Busch’s second win in just seven starts this season, which has included two top fives and two DNFs, has propelled the driver to 35th in the points standings. He now sits with a slot for the Chase for the Sprint Cup almost within his reach.

This weekend the series heads to a place where Busch has had great success over the years: New Hampshire Motor Speedway. In Busch’s 20 starts at the Magic Mile, he has posted one victory, seven top fives, and has won two poles. Despite the No. 18’s struggles at short tracks this season, Busch’s history in Loudon speaks volumes, and he can’t be overlooked as one of the favorites to take home yet another win in New England.

Now let’s dive into this week’s mailbox questions from you, our readers…

Q: Hi Greg, Danica Patrick and Dale Earnhardt Jr. getting into it on the track on Saturday night seems to be the hot topic, besides the new rules package coming out of Kentucky. Was Danica right to get retaliation on Dale? I am a huge No. 88 fan and really curious if we can read any into Dale Jr.’s troubles Saturday? Thanks. – Robert F., Fayetteville, N.C.

A: Thanks for writing in this week, Robert. Outside of the early success of the new rules package debuting this past week at Kentucky, this has been sort of the story lead of the week in the Cup Series. The entire situation, as has been well documented, can be summed-up by one word: misunderstanding. There was a great deal of misunderstanding on the part of both teams. While Patrick had a right to be mad that Earnhardt ran into the back of her, she didn’t fully know right away that he had no brakes.

At the same time, the No. 88 shouldn’t have been running up in that high groove, and probably should have been down near the apron before coming in for pit service to get the brakes assessed. It seem like Earnhardt’s spotter, TJ Majors, didn’t see Patrick up there on the track, and before he could instruct Earnhardt to move down, he collided with the No. 10 car. Earnhardt actually said following the race, “I probably shouldn’t have had been racing that hard…”

Patrick declined to speak with the media.

It was the events that occurred following the initial contact that were troublesome, though. There is no room for drivers getting into one another on pit road, no matter the situation. Although it was just a tap on the bumper by Patrick, the results could have been much worse. Sometimes in the heat of the moment, drivers forget that there is a reason for a speed limit on pit road or that there are defenseless crew members who are not immune to moving steel and rubber. Again, Patrick did not intend to cause real harm to the No. 88 or any one person, but when drivers make contact on pit road, no matter how small, the possibility of something much, much worse happening is certainly increased. In the end, I doubt this scuffle will continue beyond Kentucky, and the feud between her and Earnhardt will be over by the time we take the green flag up in New Hampshire on Sunday.

As for the brake issues Earnhardt suffered? I wouldn’t read anything into it at all. Parts are subject to failure, and those kinds of problems happen in racing. It appears Earnhardt may have been at fault for the issues since he didn’t turn on his brake fans early in the race, and the system was just unable to recover. With that said, the No. 88 team has been pretty stout all season long, and I don’t foresee that changing at all before the Chase.

Q: Hey Greg, the Chevys seemed to not be on their game on Saturday at Kentucky Speedway with the new package. Any insight as to why the Chevrolets were so weak when they’ve been dominant all season? – Clay S., Augusta, Maine

A: Clay, thanks for the question. Why were the Chevrolets not dominant on Saturday night? Now I’m no engineer, but I’ll be honest with you, there is no real racing or scientific reason for why the Chevy drivers were not up at the front on Saturday.

For example, we saw our pole sitter, Kyle Larson, who prefers the looser style of driving that was present on Saturday night, up toward the front of the pack during the race. Unfortunately, Larson went up into the wall and finished two laps down, and we also saw the brake trouble with the Earnhardt. The rest of the dominant bowties finished in the top 10, including Jeff Gordon (seventh), Kevin Harvick (eighth), Jimmie Johnson (ninth) and Kurt Busch (10th). So not a horrible night for these Chevrolet teams, right?

However, to your point, the only Chevrolets that led laps were Reed Sorenson, who led a single circuit, Alex Bowman and Ryan Newman, who topped the field for two laps apiece. That’s a major decline in laps led for a single race by the manufacturer that has been beating the rest of the field like a drum all season long. Chevy’s 11 wins leads the way in the Sprint Cup Series this season.

I don’t think the reason the Chevys didn’t contend for the lead Saturday night was because of the new rules package. It probably had more to do with a very strong Toyota camp led by JGR and a pair of Ford Fusions for Team Penske that were extremely hard to beat all night.

Sorry, Junior knew since the get go that his brakes were a issues (by his own adbsentmindedness, hey..it happens) he was basically a menace the whole race and DP was the victim of the his teams bone head decision, whatever that was. She was mad, don’t blame her. What I find fascinating is so many of the Daddy Earnhardt club were ripping her to shreds..the very same people it seems who were defending her against the comments of Richard Petty. I question the sanity of many of race fan, especially anything Junior/Earnhardt. It is funny the comment made about “how much attention she gets”, or something to that liking. Really Dale…let us remember who you are named after..you are NOT just another NASCAR DRIVER attention. Just keeping it real. Two of NASCARS merchandise cash cows. Funny stuff. In all fairness the whole doo-doo pile is on Junior, no matter how you wanna slice that one up.

As for Kentucky, Penske and Gibbs have never had a problem there, a lot of “debris” cautions came into play again and may or may not of helped. Fresher tires most always prevail and they did. Hopefully when a upcoming track that doesn’t play into either teams hands shows Penske or Gibbs up front, then I think the package change is onto something.

At the beginning of your second paragraph you say that, “More downforce and less drag made for exceptional racing…” What race were you watching? The splitter was reduced to almost nothing and the spoiler was reduced to 3.5″ for this race. The “less drag” part was correct, but for a 1.5 mile race track that is not a huge factor, and the downforce was, in fact, greatly reduced by this special package.

What Danica did on pit road in retaliation was pretty mild as to what her teammate, our champion Harvick, has done with some of his bonehead moves in retaliation in the past on pit road. Maybe she’s learned some things from him.

Normally I wouldn’t defend Danica, but I have to say that Jr had a problem with his brakes from the beginning and knew it. Why is it on the spotter to tell the driver there is a car in front of him? Look out the windshield! Danica was mad, I can’t blame her under the circumstances. Yeah running into him on pit road does put people at risk, however NASCAR didn’t even mention it (not surprised considering that those 2 are “special” in NASCAR’s eyes) and both of them get extra consideration that others wouldn’t benefit from in the same circumstances.

I thought the whole thing was funny, especially Jr’s reaction since I’m not a fan of either driver.

Very interesting, the sound of silence from NASCAR is deafening on two counts. Junior should have been black flagged, he was having trouble the whole race…and why wasn’t Danica fined and taken to the hauler for her stunt on pit road. I thought her actions were a cardinal no-no, guess it only applies to certain drivers.

princess is above rules

If a driver has been pretty vocal about NOT HAVING BRAKES then why did NASCAR not black flag him Dale Earnhardt Jr and the 88 team and have them hit the garage to fix them?

I think it is far more dangerous to be hitting 200mph without brakes then hitting 200mph and hitting something or someone because you do not have brakes.

Yet, I also believe that Danica Patrick has no talent as a driver and the publicity stunt is over for her.

Looks to me from Jr’s in car camera that Patrick moved down to the middle of the groove. When you run in the middle of the race track you can count on someone moving you out of the way.
There is no such thing as ‘racing too hard’