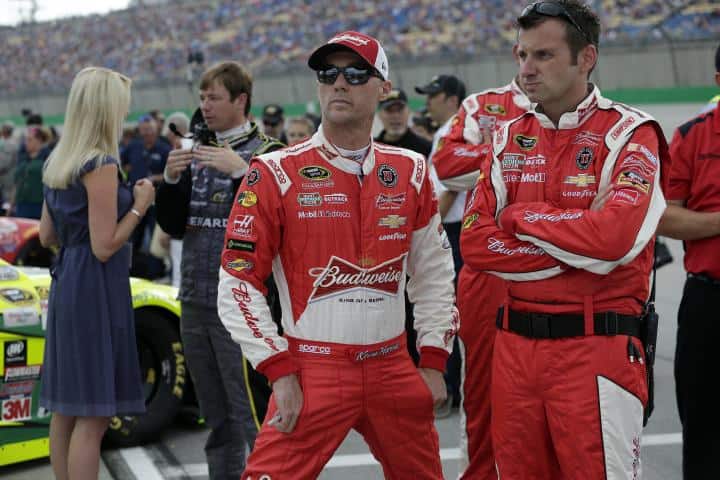 AJ Allmendinger had a unique opportunity on Tuesday at the Bristol Motor Speedway. Allmendinger, pictured in this photo tweeted by the track, is hitting golf balls from the top of the speedway. Doing something like this would be a lot of fun!

@Ford Didn't offer a @NASCAR @keselowski "Special Edition" Fusion so I made my own…#whiteduece pic.twitter.com/XNd3uAU7xO

Sometimes race fans will go above and beyond to show support of their favorite NASCAR drivers. Brad Keselowski retweeted this tweet, showing everyone what this Keselowski fan did to his very own Ford Fusion. Let’s just say, street cars emulating NASCAR stock cars look really cool!

This timed #HomeRunDerby feels like group quals. A #NASCAR team would probably wait until there was 1 second on the clock to start swinging.

NASCARCasm spent his Monday evening watching the MLB Home Run Derby. The competition highlights some of MLB’s most powerful hitters of the year and turns it into a competition. In 2015, MLB initiated a clock, which NASCARCasm compared to NASCAR’s knockout qualifying rules in this tweet. Safe to say that each hitter used all of their time up.

Thanks for Jenga Bday gift @DaleJr im ready for competition! 6for7 on wins ? pic.twitter.com/FIZ7l1nBht

Martin Truex Jr. received a unique birthday present from Dale Earnhardt Jr. Earnhardt purchased a gigantic Jenga set that nearly reaches the celling in Truex’s home. Truex posted this photo, showing everyone how much fun he and his girlfriend are having.

No better feeling than Keelan hearing my voice jumping out of bed and giving me a big old gorilla hug! #bestbuddy

Kevin Harvick described the bond between him and his son Keelan. Keelan, who heard his father’s voice, jumped out of bed to give his daddy a gorilla hug. This is one of the cutest things about having little kids.

New dads @keselowski & @KyleBusch can learn how to program @TheWiggles on to their jukeboxes together now. pic.twitter.com/I8LVPc2oN2

Kyle Busch and Keselowski received a unique trophy for winning at Kentucky Speedway this past weekend. The two drivers, oddly enough, became parents around the same time. The official NASCAR Xfinity Series account posted this hilarious tweet, saying they should play children’s music on them. Let’s just say, this will probably happen!

With Jeff Gordon retiring at the end of the season, the folks at Kentucky Speedway wanted to give him a gift that he will remember. The track came together and gifted Gordon with bourbon. This is one of the most interesting gifts that will ever be given to a professional athlete retiring.

Clint Bowyer has been getting pretty frustrated with all of the rain showing up at NASCAR events. Bowyer posted this tweet over the weekend, saying he’s watched every movie on demand. With all of the delays lately, you would probably have enough time to watch every movie ever made.

Whenever testing is delayed during a scheduled Sprint Cup Series test, just pull up Kasey Kahne’s Twitter feed. Kahne uses these delays as a way to interact with the fans on social media. Just like always, Kahne posted this update, saying testing was canceled due to the weepers. A weeper occurs when water leaks from the cracks in the racing surface.

Fussy most of the day but w a race on TV @brextonbusch is quiet and ready to watch @nascaronnbc. pic.twitter.com/iTtqwVcuhQ

It appears that Busch has found what keeps Brexton quiet. Brexton, his newborn son, is pictured here watching the race with his father. It’s safe to say that Brexton is already in the process of learning the art of racing cars.