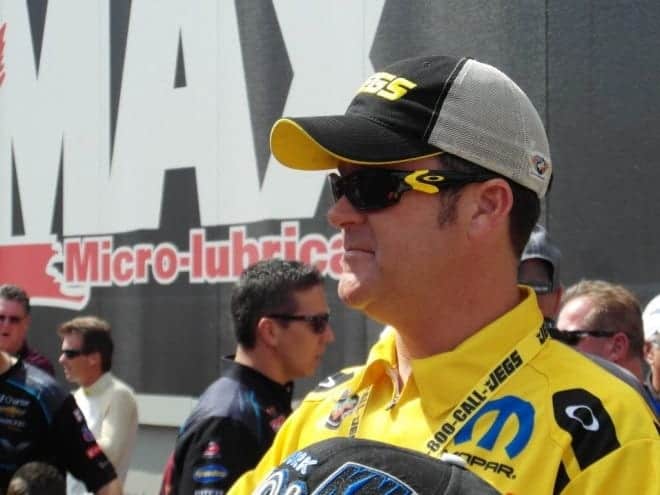 Now, what just happened there was a large part of the reason for the change in television partners for 2016, a year before NHRA’s deal with ESPN was originally scheduled to end. For the news itself, in case you haven’t already seen it, check out the breaking news piece posted yesterday.

We’ve talked about television in this space before, most notably after the massive snafu that was coverage of the Kansas Nationals on Memorial Day weekend. It was a frustrating subject for fans, many of whom felt like no one was hearing their complaints. In hindsight, that was obviously not the case. Turns out the NHRA not only heard but also shared many of the same feelings about the poor scheduling from ESPN.

Instead of difficult to find and off the beaten path time slots, most NHRA events will now air on Sunday afternoons beginning next year. FOX Sports says the remaining eight races will still be seen during afternoon or prime-time hours on the weekend. If I had to guess, I’d say the non-live events will be early in the season, pushed back a bit while FOX is airing NASCAR coverage. NHRA might lay claim to the title of number two motorsports series in the country, but we all know who is still number one.

ESPN, during its tenure, also cut out Friday qualifying shows. That’s additional coverage which will return with the move to FOX Sports. So the bottom line is we get more hours of drag racing coverage overall and at times when fans are actually awake — check out the qualifying schedule in the fall on ESPN this year. Only night owls need apply.

The biggest plus to come out of this decision is the drastically increased number of live elimination rounds fans get next year; 16 are slated to run live as opposed to five this year. That’s two-thirds of the schedule, folks. Aside from the obvious benefit to fans who will get to see live action, it’s a big opportunity for the NHRA to grow its product, the sponsor interest and revenue it generates. That’s good for everyone.

Air time is half the equation. The other half is production, something else that has come into question at times as drag racing is a difficult sport to really communicate well on television. NHRA will be taking that aspect in house so now that they’ve got eyeballs in good timeslots it will be up to them to win those viewers over. We’ll see how they do.

As an interesting side note, the departure of NHRA from ESPN means there will be no motorsports coverage on the network save for some Indy 500 qualifying. (The 500 itself and a couple of other IndyCar races are broadcast on ABC.) Most doubt ESPN will really miss it. Meanwhile, a healthy racing competition has developed between FOX and NBC, the two networks that share NASCAR. FOX has now gotten hold of NHRA while NBC counters with IndyCar and Formula 1.

2011 – Made professional debut and raced at four national events.

Some things most people don’t know about Alexis: While she’s only been in Funny Car a few years, DeJoria worked her way up through the ranks, competing in NHRA Super Gas in a 1963 Corvette roadster and in NHRA Super Comp in a dragster. She also drove an NHRA Top Alcohol Funny Car for five seasons. Alexis won in all of those classes before moving up. Her father John Paul DeJoria, who is also one of her biggest fans, is a successful businessman who owns Paul Mitchell Hair Care Products, Patron Tequila, and John Paul Pet Products. Many people are also familiar with her husband, Jesse James, who is a TV personality and the owner of West Coast Choppers.

Most of the fan stories told by drivers are pretty funny, especially when it comes to autographs. It’s amazing what people come up with for their favorites to sign. We’ve heard about body parts, babies, pigs… you name it. In all seriousness, though sometimes the whole fan encounter thing can take on a scary dimension. DeJoria ran into one rather overzealous fan and tells us about it in this week’s Crazy Things video. Good on Alexis, managing to keep her composure in a really weird situation.

Number of the Week: 7

The NHRA Mello Yello Drag Racing Series takes a weekend off before embarking on the Western Swing, beginning with the Mopar Mile-High NHRA Nationals from Bandimere Speedway near Denver, Colorado. Everyone is excited about the new TV deal, but for now, we have to finish out 2015 with ESPN and tape-delayed coverage for the remainder of the season.

I feel that I am the kind who feels that in this rush, being chinced out of a history dating back to Wide World of Sports and a 30 Year History with ESPN freestanding, warts and all is tough for me to take. What does Fox Sports owe NHRA besides a check? Even though ESPN was not without fault, ABC tried to on and off coverage, and TNN was the High Bar, higher than NBC. Frankly, Sports and Motorsports Coverage is nothing to kid with and even though I am not trying to mean it in money, but, we aren’t even coming half-close to a legacy sensitivity and waiting things out.

Not a huge NHRA fan, but I watch once in a while. ESPN does not care about any auto racing and it appears they treated the NHRA about as well as Nascar in their final days, if not worse. ESPN cares about their cash cows only (college football, nfl, nba, college basketball) and that’s it. The rest is filler. I’m still trying to figure out why people continue to think that ESPN is the be all end all of all things sports. They may have the money to buy all the major events, but it doesn’t mean they cover them well. Given the fiasco with the ESPY’s this year and the network turning into more of a TMZ network for sports more than anything else over the years, the NHRA will be much better off in the long run.