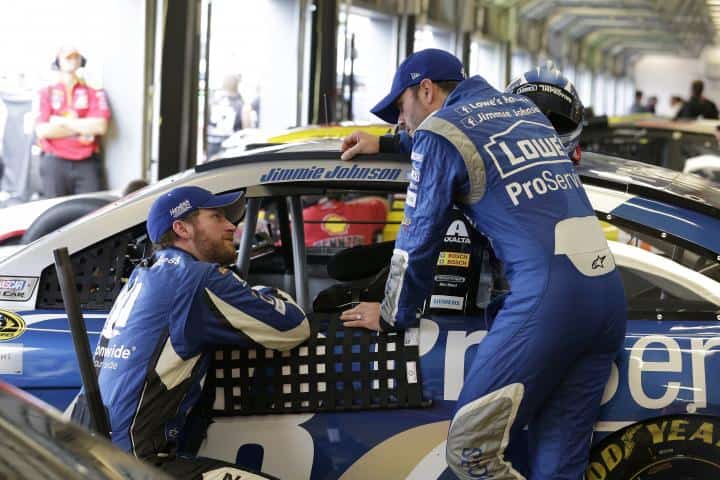 “The Official Rabbi of NASCAR.”

That title caught my attention recently when I heard it used in reference to Rabbi Daniel Lapin, a noted rabbinic scholar and best-selling author.

“It is entirely a self-bestowed title,” Lapin told me in an interview this week. “It flows from my love affair with the sport and with its enthusiasts.”

Rabbi Lapin is President of the American Alliance of Jews and Christians, a nonprofit organization “working to advance our nation toward the traditional Judeo-Christian values that defined America’s creation and became the blueprint for her greatness.” He’s also a diehard NASCAR fan.

The rabbi has been following the sport since 1990, two years before a young Jeff Gordon, now on the threshold of retirement, would make his Cup Series debut. He says it is the quality of people involved in the sport – from the drivers, owners and team members to the fans themselves – that first attracted him to NASCAR and kept him watching and attending races for more than 25 years.

“It lingers as perhaps the last collection of people who believe and live American values. Only performance counts, not excuses,” he said. “Family matters. Just see how many racing families there are; hard working, mostly Bible-believing Christians, which makes me comfortable, as I’m a Bible-believing Jew.”

Given his devotion to the sport, I was curious to get Lapin’s take on the assertion of another rabbi, Jason Miller, who posted a blog a few years ago entitled, “NASCAR and the Jews.” In it, Miller wrote, “Short of Ricky Bobby (Will Ferrell) converting to Judaism in the Talladega Nights sequel, I don’t think NASCAR will ever become a popular sport for the Jews.”

Lapin replied, “Being only about 2% of America’s population, [Jews] for the most part are not into sports at all. It would be equally true to say that I don’t think tennis will ever become a popular sport for the Jews. Neither will football, badminton or darts; need I add professional wrestling and heavyweight boxing. Because our numbers are small, there are only a few Jews involved in all these activities, but never enough to call them popular sports for Jews.”

Still, some might presuppose that there would be more Jewish NASCAR fans if there was a successful Jewish NASCAR driver, competing head-to-head every week with Gordon, Jimmie Johnson and Dale Earnhardt Jr. But, from Rabbi Lapin’s perspective, it would make little difference.

“I am much more interested in beliefs than in ethno-racial identity,” he said. “I have much in common with a Bible-believing Christian; much less with an ethnic Jew who is an atheist.”

Additionally, Lapin notes that a “believing and committed” Jew may never end up competing full-time in NASCAR, for one simple reason.

“Since many races are on Saturday, our Shabbat or Sabbath, no believing Jew can be a driver, and even attending races as a spectator has to be carefully planned,” he said. “While there may be an ethnic Jew or two who drives, it is largely irrelevant, but a believing and committed Jew is blocked from many occupations by our beliefs. And that is just fine.”

humm…wonder if a rabbi has ever given the invocation?

he’s only unofficial because he hasn’t garnered up the cash to buy the “official” title from the france clan.