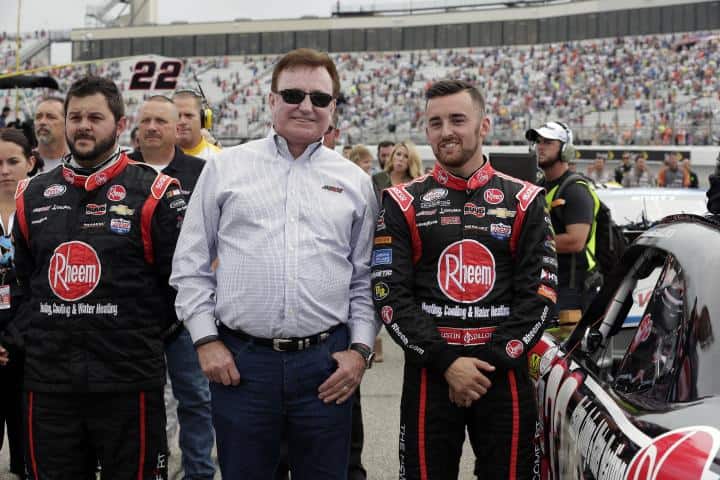 A week after winning his first NASCAR Xfinity Series event of the year, Brad Keselowski is looking for his second consecutive victory for Team Penske.

So far, he’s well on his way. The 2012 Sprint Cup Series champion set the pace in the first practice session of the weekend at New Hampshire Motor Speedway, clocking in at 29.271 seconds (130.122 mph). Winning two events at Loudon (2012 and ’14) Keselowski is searching for his 34th career Xfinity Series triumph in his 221st start. With two victories at the 1-mile track, the driver of the No. 22 car has combined to lead 283 of 400 laps.

Sitting in the second position when time expired was Denny Hamlin, making his eighth start of the year in NASCAR’s second-tier division. Hamlin, though, was no match for Keselowski, nearly three-tenths of a second slower than the No. 22. The Richmond winner has five top 10s this season, piloting the No. 20 Toyota for the third time after running the No. 54 car in place of Kyle Busch for five events.

Ryan Sieg, who drives for his family-owned No. 39 team, was third quickest during practice after putting up a qualifying run late in the session. That’s far better than he’s finished in any series race in 2015. Running full-time for the second consecutive season, Sieg has a best finish of just 15th (Chicagoland last month).

Rookie Ben Rhodes is making his third career start for JR Motorsports this weekend and was fourth in the first practice session. In his previous two starts, the reigning K&N Pro Series East champion finished seventh and 21st, respectively. Rhodes also posted the quickest 10-lap consecutive average speed at 125.372 mph, which barely edged out fellow rookie Brennan Poole. Poole was sixth in practice with another rookie, Daniel Suarez sitting in between.

Championship leader Chris Buescher ended the session 16th after finishing just outside of the top 10 in each of the last two races. None of the four Roush Fenway Racing cars were inside of the top 10 in practice with Darrell Wallace Jr. being the quickest of the squad in 15th.

Austin Dillon continued his strong runs in NXS equipment Friday, posting the top speed in Happy Hour for Saturday’s 200-mile race. Dillon, driving the No. 33 Chevrolet, topped all drivers with a speed of 130.007 mph. Two Richard Childress Racing teammates followed close behind: Brendan Gaughan was second running the No. 62, followed by the No. 2 and Brian Scott. Joe Gibbs Racing rounded out the top 5 speeds, clocking in with Suarez and Kyle Busch.

The big surprise in the session was JJ Yeley, running sixth quick in the JGL Racing No. 28 Toyota. Keselowski, after leading first practice by a mile, slipped to seventh while RCR’s Ty Dillon, Hamlin and Rhodes rounded out the top 10.

40 drivers are attempting to qualify for tomorrow’s event so everyone out on track will make the race.

Wow a Cup driver on the pole for the Xfinicup Practice! Who saw that coming? And more importantly, who cares anymore?