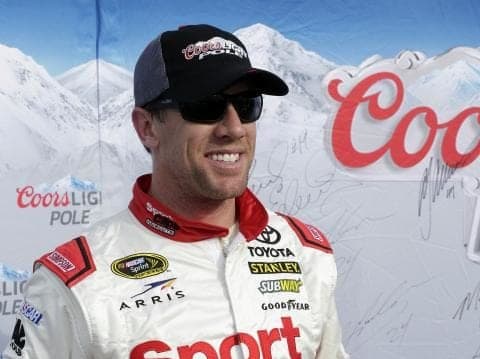 Joe Gibbs Racing took their hot streak up north. One week after posting four cars inside the top five at Kentucky Speedway – a first for the team in its 23-year history within NASCAR – JGR followed up with a pole-winning run by Carl Edwards, one that puts them in position to contend in Sunday’s 5-Hour Energy 301. The No. 19 Toyota outgunned the other 43 cars making attempts, clocking in with a speed of 135.164 mph to earn Edwards’s first pole of the year and the 14th of his Sprint Cup career.

“I’ve struggled at this racetrack so this is big for me personally,” said Edwards, who has just two top-five finishes at the track over the past decade-plus. “Everybody at JGR has been working so hard. Right now, it just feels right.”

It’s the sign of a potential turnaround for Edwards, posting only three top-10 results within the season’s first 18 races. His teammates weren’t far behind him on the grid, with Kyle Busch (fourth), Denny Hamlin (fifth) and Matt Kenseth (eighth) flexing JGR’s muscle a second straight week. Despite running the old rules package, one that they’ve struggled with this season the organization is making progress just when it seemed their Chevrolet competition was uncatchable.

“I think everybody has kind of done their work and everybody has really been digging hard at being able to put everything together for us,” explained Kyle Busch. “We’ll just hope that continues and we’re hitting our stride at the right time as a company.”

Joey Logano sits on the outside of row 1, a solid effort as he looks to repeat last fall’s trip to Victory Lane during the Chase. Teammate Brad Keselowski qualified 10th, as Team Penske easily was the best Ford team on-track Friday. Chevrolet, after dominating much of the 2015 season could do no better than sixth (Kurt Busch) as just three of their cars qualified inside the top 10. Point leader Kevin Harvick, who has failed to lead a lap in two straight races wound up 12th, the worst-performing car inside the final round of qualifying.

Among those who struggled, continuing their recent trends were Jeff Gordon and Tony Stewart. Gordon starts a distant 23rd, easily the worst of the Hendrick Motorsports cars, while Stewart didn’t even make it out of the first round. He clocked in 25th.