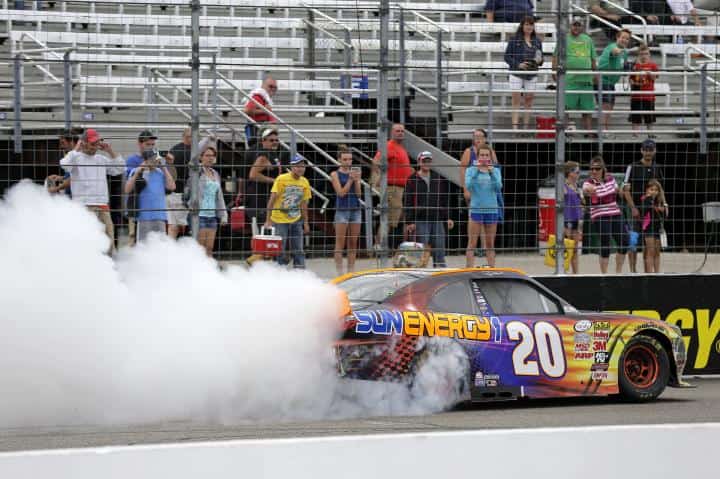 Denny Hamlin was all over the place today. Literally.

From practicing his Sprint Cup car in the morning, to spinning in front of the field early on in the Xfinity Series race in which he started from the pole. However, at the end of 200 laps, it was Hamlin who took the checkered flag and won the Lakes Region 200.

Hamlin qualified on the pole but quickly found himself in the back of the field, after making contact with his teammate Kyle Busch, which ended with a spin for Hamlin. The two Joe Gibbs Racing teammates eventually found their way back to the front, only to make contact again racing for the lead. The latter contact did not end in a wreck, but caused Busch to lose positions that, along with an ill-handling No. 54 car, prevented him from challenging for the win. Busch, the all-time leading winner in the Xfinity Series, would end his 300th career race in the fourth position.

On the final restart, Austin Dillon got around Hamlin and began to drive away. Hamlin eventually reeled him back in and the two drivers made contact in turn 3, similar to how Hamlin and Busch collided. Dillon’s car went up the track, and although he was able to continue going, he could not catch Hamlin.

“He never wanted to race side-by-side for a lap with anybody. He wrecked his teammate in the beginning of the race. We’ve got plenty of races left… I’ll get into him,” said a frustrated Dillon after the race. Dillon, Hamlin and Busch will all compete in the Sprint Cup race at the same track Sunday afternoon.

Speaking about the incidents in Victory Lane, Hamlin stated “…[racing on] the bottom lane, if you don’t have any air on the outside of you, you just can’t hold it.” Several drivers struggled with this throughout the race.

For Denny Hamlin, the win was his first in the Xfinity Series at the track and his second victory of the season. Brad Keselowski came up two spots short in his attempt at three in a row at the 1-mile racetrack. Daniel Suarez, with a fifth-place finish, put all three JGR cars in the top five. Ty Dillon, trying to make up lost ground in the points standings, finished sixth. The No. 7 of Regan Smith finished in the No. 7 position. Darrell Wallace Jr., Chase Elliott, who entered the race second in points, and Brennan Poole completed the top 10. NXS points leader Chris Buescher struggled throughout the race. He finished off the lead lap in the 14th position. Brian Scott, who was one of the very few number of cars who could keep pace with Hamlin, caused the sixth and final caution of the day when his engine expired, relegating him to a disappointing 29th-place finish.

With now 16 races remaining in the season, Buescher has a 31-point lead over Elliott, and 38 points over Ty Dillon. The Xfinity Series will hit the track next Saturday for the Lilly Diabetes 250 at Indianapolis Motor Speedway.

Ho-hum! Another Xfinity race dominated by Cup regulars. I did think it was hilarious when Dennis the Menace spun and nearly took out Mr. Ego. Then it turned disgusting as these to egomaniacs were able to storm through the field as they did. Could it be because all those series regulars who’s combined yearly budget is less than what Mr. Ego’s and Dennis the Menace’s budgets are for one race? Could it be those drivers knew that these two egomaniacs would wreck any of these significantly lesser teams without giving it any thought? Oh, Coach Phoney-Joe! You must feel so proud!

Sorry, even though I would have preferred Brad to win (if for no other reason than he drives a Ford), as opposed to Dennis the Menace, or Mr. Ego, a Cup driver winning in Xfinity is a hollow victory.

As for Buescher, he was in defence mode, or so it seemed. Keep his nearest challengers in sight, and take no risks. It won’t work! He is up against a Hendrick driver and one of Grandpa’s Grandkids. If Buescher doesn’t get more competitive, he’ll be done by Bristol. Personally, I’d like to see him win the Championship, if for no other reason than he’s in a Ford. But, being up against two well-funded Chevrolet teams, especially a Hendrick team, it won’t happen.