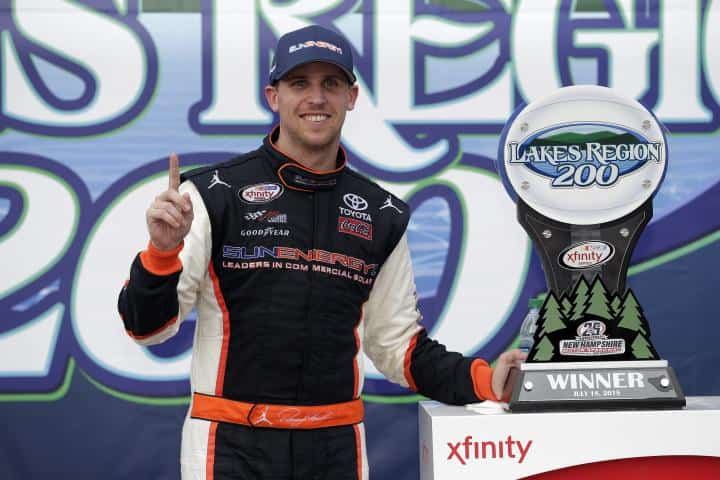 The sun shined bright on the energy-soaked car driven by Denny Hamlin at Loudon during the Lakes Region 200 on Saturday afternoon. Controversy sparked the Joe Gibbs Racing driver throughout the day, fighting a loose racecar that caused him to spin out ahead of teammate Kyle Busch while battling for the lead 24 laps into the event.

Rebounding less than 20 laps later to get back to the front, Hamlin dominated the 200-mile event at New Hampshire Motor Speedway, taking home his second triumph of the season in the Xfinity Series. Piloting the No. 20 Toyota for the first time since Michigan, the 25-time Cup Series winner held off 2013 champion Austin Dillon, who made a late-race charge after passing Brad Keselowski for the runner-up position with less than 10 laps remaining in the race. On the final restart of the event, Hamlin got loose, moving Dillon out of the way.

“He called me a spoiled rich kid at Texas two years ago, and I hate it,” Dillon said following the race. “He said check the last name. I said my last name’s Dillon, not Childress. But he is my grandfather. I’ll always act with class. Everybody in the media knows that. I’ve worked my way here like anyone else. With Denny acting like that, what does he want me to call him? I don’t do that. I know how to act.”

The victory for Hamlin marks his fourth year of winning multiple races in NASCAR’s second-tier division. The last time he had at least two wins in a season in the Xfinity Series was in 2008, when he won four of 19 contests.

Finishing fourth, Busch failed to become the first driver to win an Xfinity Series race in his 300th career start. In the Cup Series, Busch was victorious in his 300th start at Texas in 2013.

There were 12 lead changes between seven drivers, with Hamlin leading a race-high 145 laps. Throughout the race, there were six cautions, which totaled 38 laps. The race lasted two hours and nine minutes, which was nine minutes longer than last year’s event.

For the second time in his 12 career Xfinity Series starts, Brennan Poole finished inside the top 10. The 24-year-old, who finally earned a chance to move up from ARCA this year, had an average finish of 19.5 entering Loudon. However, the No. 42 car ran inside of the top 15 throughout the race. Poole’s HScott Motorsports with Chip Ganassi team has finished on the lead lap in half of his starts as he looks to finish off the remainder of his schedule on a high note.

Suarez‘s hot streak continued in Loudon. The Mexico native finished fifth on Saturday, which marks the second straight weekend that he was the highest finishing Xfinity Series regular. Earning his third top five of the season, Suarez moved up to seventh in points after sitting in 29th to start the season at Daytona.

Roush Fenway Racing struggled with each of its four cars on Saturday afternoon. The handling on the Fords was off throughout the day, and the lone driver within the stable to compete in the top 10 was Wallace Jr., who finished eighth. Championship leader Buescher ran outside of the top 15 for the majority of the 200-mile race. He rebounded to finish 14th, shrinking his points lead to 31 markers ahead of Elliott.

As if the bad luck couldn’t get worse for Brian Scott, it did. The No. 2 car was inside the top five throughout the day once again, and was competing for the lead with Hamlin for a majority of the race. However, on lap 165, the engine on his Chevrolet expired, giving him his second engine-related DNF of the year (first came at Las Vegas). He dropped from seventh to 10th in the championship standings, and sits more than 125 markers behind Buescher.

Eric McClure earned his second top 20 of the year, and first at a non-plate track since Kansas in Oct. 2014. Finishing 18th for TriStar Motorsports, he had his first top 20 since moving back to the team after racing for JGL Racing to start the season.

Seven drivers are running Sunday’s 301-mile Cup Series race at Loudon. Derek White will make his Cup debut for Circle Sport Racing on Sunday afternoon in the No. 33 car after racing his self-owned No. 13 Dodge on Saturday.

The Xfinity Series race at Loudon was once again dominated by the Cup regulars. While Busch and Hamlin dropped back after their incident, the race was seemingly going to get more interesting, but the Toyota duo easily worked back to the lead within 20 laps. Yeah, 20 laps. It was insanely impressive due to a mixture of strategy and going from the mid-20s to the top 10 in 10 laps, along with a fuel-only pit stop during a caution period.

For the division regulars, Saturday’s race was rather tough. As previously noted, the Roush gang struggled at the 1.058-mile speedway, and it is something that the team should be concerned about. At this point in the season, the team should be hitting its strides, not struggling for top 10s.

Meanwhile, Richard Childress Racing had a solid day. Besides Scott’s engine woes, the organization performed rather well at Loudon. Each of the team’s cars ran inside of the top 10 throughout the race. Gaughan slipped to 11th late in the going, but was able to manage a lead-lap finish. Ty Dillon’s sixth-place finish gave him his first top 10 since Chicagoland, giving him some momentum heading into Indianapolis, which marks the one-year anniversary of his only win to date in the Xfinity Series.

Heading to the “yard of bricks,” the regulars will need to step up their game. It can either be a race where a career highlight can be made, or one where things can go bad and a driver will remain unseen.

Ho-hum! Another Xfinity race dominated by Cup regulars. I did think it was hilarious when Dennis the Menace spun and nearly took out Mr. Ego. Then it turned disgusting as these to egomaniacs were able to storm through the field as they did. Could it be because all those series regulars who’s combined yearly budget is less than what Mr. Ego’s and Dennis the Menace’s budgets are for one race? Could it be those drivers knew that these two egomaniacs would wreck any of these significantly lesser teams without giving it any thought? Oh, Coach Phoney-Joe! You must feel so proud!

As for Buescher, he was in defence mode, or so it seemed. Keep his nearest challengers in sight, and take no risks. It won’t work! He is up against a Hendrick driver and one of Grandpa’s Grandkids. If Buescher doesn’t get more competitive, he’ll be done by Bristol. Personally, I’d like to see him win the Championship, if for no other reason than he’s in a Ford. But, being up against two well-funded Chevrolet teams, especially a Hendrick team, it won’t happen.