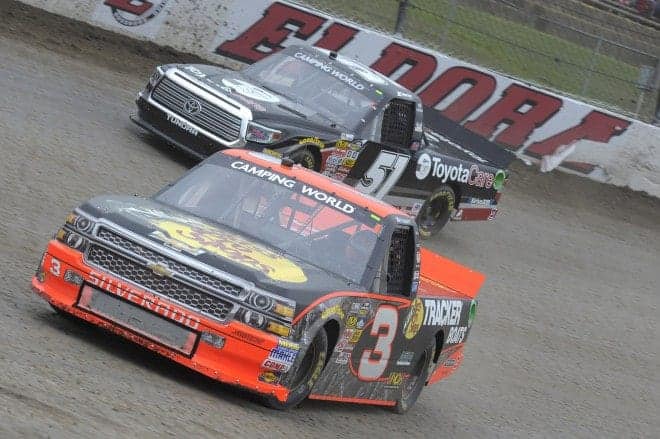 For the third-straight year, the NASCAR Camping World Truck Series is ready to get dirty.

NASCAR released the preliminary entry list for the July 22 1-800-Car-Cash Mud Summer Classic at Eldora Speedway on Friday (July 17). The list includes 31 drivers, meaning every team will make the race.

Inaugural winner Austin Dillon and brother Ty Dillon will both return to the Truck Series for Wednesday’s race. Austin will pilot the No. 31 DOW Chevrolet for NTS Motorsports, while brother Ty will start in the No. 33 Rheem Chevrolet for GMS Racing.

Kyle Busch Motorsports will bring a new lineup to the race, fielding Matt Tifft and Christopher Bell along with series regular Erik Jones. Tifft will pilot the team’s No. 51 ToyotaCare Toyota, while Bell will be behind the wheel of the No. 54 Toyota Certified Used Vehicles Toyota.

Already two-time winners in 2015, JR Motorsports will return at Eldora with the No. 00 Haas Automation Chevrolet piloted by Cole Custer.

Madeline Crane and Chad Boat will make their NCWTS debuts. Crane will drive the No. 80 AirTec Ford owned by Tracy Wallace. Boat, a veteran of USAC and other dirt series, will pilot the No. 15 Corvette Parts/Pristine Auctions Chevrolet typically driven by Mason Mingus.

The NASCAR Camping World Truck Series will return to action on the half-mile dirt track Eldora Speedway on Wednesday, July 22, running two early practices before returning for Keystone Light Pole Qualifying at 5:15 p.m. ET. The field will return for heat races at 7 p.m. ET, followed by coverage of the 1-800-Car-Cash Mud Summer Classic at 9 p.m. ET on FOX Sports 1.