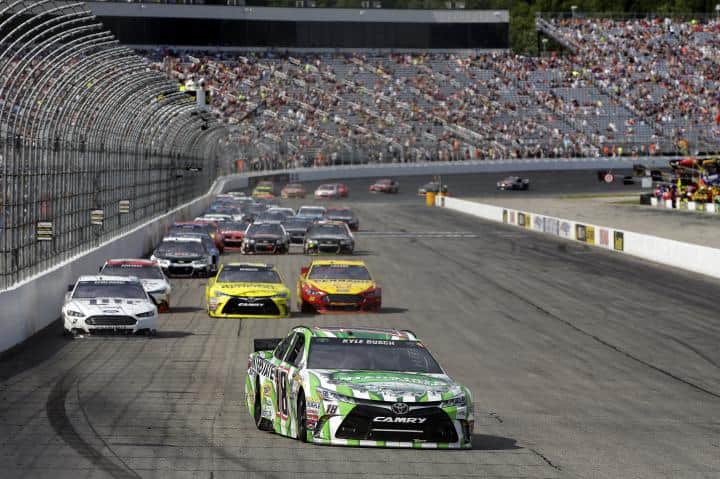 Sprint Cup Series: Kyle’s A+ Effort. Three Cup wins in four races? – Even the most diehard Kyle Busch fan could have never expected this summer surge, punctuated by a New Hampshire victory Sunday that has cemented Busch as the hottest driver in Sprint Cup.

Bum legs? What bum legs? Busch is driving like a man possessed just five months removed from those devastating Daytona injuries. His pass to earn his lap back, an aggressive maneuver in an otherwise awful event showed no fear and earned him the edge in a track position race. Busch, who one month ago seemed incapable of making the Chase now just sits less than 60 points outside the top 30, in position to qualify despite missing the season’s first 11 races. Only Jimmie Johnson has won more Cup trophies this season; only a handful of drivers have led more laps. It’s truly an incredible comeback story.

Yet here’s where it gets tricky for NASCAR. It’s one thing for Busch to make the Chase, a just reward for his hard fight back to health and respectability. But suddenly, he’s not looking like a ceremonial playoff participant; Busch may be in the best position of his career to win a title. How will fans and NASCAR react to that increasingly real possibility? Will there be backlash to a driver who wins a championship despite missing nearly a third of the season? It’s a question most desperately wanted to avoid. But to Kyle Busch’s credit… he’s giving people no choice. They have to address it. – Tom Bowles

Xfinity Series: Cup Dominance Takes Over at Loudon – Well, it was going to be a spectacular race at Loudon, and in retrospect, it was to some extent. However, seeing Cup drivers absolutely demolish the Xfinity Series regulars on the 1.058-mile track was ridiculous once again.

The highlight of the race involved Denny Hamlin getting loose, tapping teammate Kyle Busch out of the way multiple times, along with Austin Dillon. The incidents were seen as overly-aggressive, but in reality, it is just racing. Dillon and Busch were fairly angry after the race, but they have something to remember, they are running in the Triple-A version of NASCAR to learn things for Sunday and keep their teams/sponsors happy, not just to win.

With decent battles for the lead throughout the day, Hamlin continued to dominate, which was relatively not surprising. However, the bright side of the 200-mile event was Daniel Suarez and Brian Scott were able to contend for positions inside the top five throughout the race. – Joseph Wolkin

IndyCar: Montoya Blunder, Rahal Consistency Offers Honda Championship Hope – Early in the 2015 season, while aerokit debris and Team Penske domination were the talk of the Verizon IndyCar Series paddock, the thought of a Honda driver winning the championship would be unlikely to be given more than a passing glance and a chuckle.

Yet, with three races remaining, Graham Rahal gives that thought a true possibility.

Montoya, winner of the Indianapolis 500, held a commanding lead entering the Iowa Corn 300 at Iowa Speedway, but was forced to forfeit a large chunk of his advantage when he hit he wall early in Saturday’s race, finishing in 24th place.

Suddenly, Rahal, who has recorded an average finish of 4.25 in the last four races, has become a championship hopeful for Honda. The next highest contender for the manufacturer is Marco Andretti, who sits 87 points back in seventh.

With only three races left in the 2015 season, Montoya still has a stranglehold on the IndyCar title, but if he should slip up, Rahal may be the one that takes advantage. – Aaron Bearden

Sports Car: IMSA Combines CTSC at Lime Rock Into One Race – On Tuesday, IMSA announced the consolidation of this weekend’s IMSA Continental Tire SportsCar Challenge events at Lime Rock Park, originally scheduled for separate two-hour races for the Grand Sport and Street Tuner classes, into a single two-hour race. Improvements made over the past year have expanded the capacity of the pit lane, allowing for 40 cars to race at one time. As a result of the move, the CTSC event will start at 10 a.m. Saturday morning.

The original plan was for the Street Tuner teams to have their own race starting at 9:15 a.m. The Grand Sport teams would have their own race starting just after lunch, and the Northeast Grand Prix for the Prototype Challenge and GT-Daytona teams would start at 3:15 p.m. Now, there will be a one hour FanWalk on the false grid near the support paddock starting at 8:30 a.m. The TUSC teams will participate in their morning warm-up during the FanWalk.

The official reason for the move, as stated in the press release, was that the TV window for FOX Sports 1 was much more attractive for a single race as opposed to two races. As a result of the move, the race will now air from 12 – 2 p.m. on Aug. 2 on FOX Sports 1. However, the real reason for the move might very well be car count. The number of teams participating in the Grand Sport class has dropped noticeably this season, partially due to competition from Pirelli World Challenge, which is cheaper to run (Grand Sport cars can be raced in Pirelli World Challenge’s GTS Class with minor changes). Only 12 Grand Sport cars are currently entered for Saturday’s race, as opposed to 28 Street Tuners.

Our own Phil Allaway will be at Lime Rock Park this weekend to cover all the action for you. Keep tuned to Phil’s Twitter feed, @Critic84, for updates from the track in addition to updates from Indianapolis. – Phil Allaway

Yup, call me a cynic. I just don’t see the turnaround and the come to Jesus moment(s) since Kyle came back from a injury that many screamed and blamed NASCAR about. It just seems…well, put it this way.. Brian France loves “feel good” story and sends it out to the newswires ALWAYS, never mind that many of the diehard fans cannot afford the extra cable fee regarding the network package Brian and his family has made billions on. The Mars family and Toya, I am sure have not been happy lately, and Brian is all about keeping any segment of his cash flow rolling.

Maybe Kyle did have a epiphany while watching his wife have photographers taking pictures of her self in various stages of less and less clothes, pregnant or not on Lake Norman (and her posting on social media) while he was recuperating. who am I to say. We all get our “see the light moments” at odd times.

Regarding the spirit of integrity and truth, NASCAR needs to rein in these bullshit cautions. the “water bottle” was a biggie this weekend as others. Glad NBC made notice of that. As one driver said it makes “NASCAR randomly nervous”. If that doesn’t say it, what does. Yup label the water bottles, if they need to get rid of empties hook up something to hold them to the pit stop,then throw them out. Much to much is riding to let teams and NASCAR manipulate for something stupid like that. Also, me and mine watched with the WTF moment when Kyle Busch got the Lucky Dog, Cat, Star etc. with that move and everybody slowed up, it smelled and smelled bad.