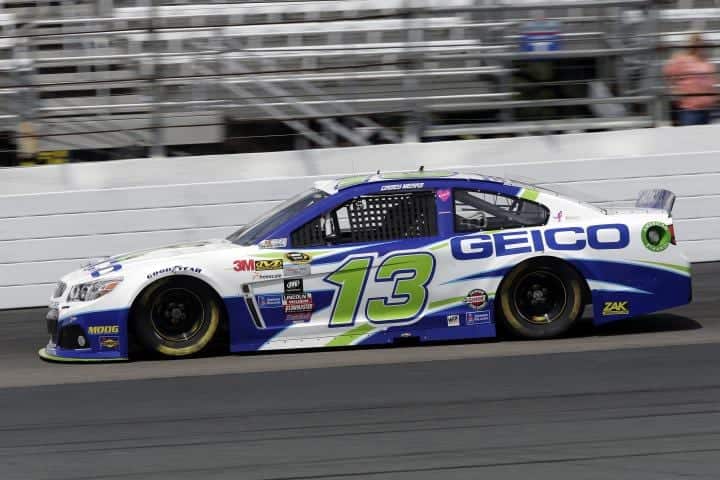 Remember the little team who could in 2014? 2015 hasn’t been quite so rosy for AJ Allmendinger and the No. 47 bunch, but the team had a surprisingly good performance on Sunday in New Hampshire, and their 13th-place finish doesn’t really tell the whole tale. Allmendinger ran well all day, leading 13 laps early as teams tried different pit strategies. He ran inside the top 10 for the middle third of the race and ralled back late. It’s the kind of run the team needs to have consistently, and if they can do that for a few weeks, Watkins Glen is on the horizon, where Allmendinger is the defending champion.

One thing that many fans tend to overlook is the time of day a race is run and its effect on the competition. While night racing has the reputation for being more exciting, truthfully, it’s often the afternoon races in the heat of summer that put on the best shows. At night, the track is cooler and while that can make for faster speeds, it also showcases the aerodynamic dependency of the cars. When they’re all fast and handle well, it’s even harder to pass than when everyone is fighting to find the handle. Simply put, day races put more in the drivers’ hands as they have to handle cars on a slick track that can change drastically over the course of a race. When cars don’t handle, there’s more passing because some drivers are able to take advantage and manhandle them around. Sunday’s race wasn’t the world’s greatest event, but a night race for Loudon is no solution. Finding ways to make the cars harder to handle, and that includes running on a hot track, is the way to go.

On the flip side, that means running in some brutally hot temperatures, and this week, a handful of drivers sought medical attention after the race. Is that because they’ve gotten used to racing in more comfortable conditions and were not as prepared as they might have been? Hard to say. Still, NASCAR has run day races in crazy heat for years and if the drivers are adequately prepared and stay hydrated, the reward seems to be greater than the risk.

Brad Keselowski and Paul Wolfe just might be the best driver-crew chief combination in NASCAR right now, and this weekend showed why. The team made smart adjustments on the car despite weather conditions that differed from practice in an attempt to be fast on Sunday—and they were fast. Keselowski couldn’t catch Kyle Busch in clean air in the closing laps, but he handily disposed of all other comers, finishing second.

Carl Edwards won the pole and the final practice session, and also led the first 19 laps. He wasn’t a threat to win after that, but he had a solid top-10 car and he was able to capitalize on that, finishing seventh.

The race itself was relatively incident-free (a lucky thing for NASCAR that nobody spun between the time drivers reported oil on the track and when they got aeround to throwing a caution for it several laps later), but one thing that needed to be better was NBC’s reporting of some of the incidents that did happen. For instance, when Alex Bowman‘s right-front tire burst into flames as Bowman was leaving pit road at one point (and on a humorous note, when that incident happened, Casey Mears‘s spotter told Mears that NASCAR was “looking for debris.” Yeah, like the car in flames at pit road exit?) The network could have attempted to interview Bowman since there was plenty of time during cleanup after the incident. They reported he had been released from infield care before the green flag flew. If it had been a big team, odds are they would have. JJ Yeley fell out of the race with 50 laps to go and not much action on track as well… there’s no reason not to track him down to ask what happened, especially since he was the one dropping fluid all over the racetrack. It’s a shame that the networks can’t get it right when it comes to the smaller teams.

Joe Gibbs Racing had the cars to beat all weekend long at Loudon, with Denny Hamlin winning the Xfinity Series race on Saturday, Carl Edwards winning the pole for the Cup race and Busch taking the checkers on Sunday. Busch made a banzai move with 50 laps to go to get back onto the lead lap after a scheduled pit stop, and the caution flew less than a lap later, giving Busch the lead for what would prove to be the final restart. Busch showed he was strong and JGR is giving everything they have to put four cars in the Chase, and it showed on Sunday.

There was a lot of talk on social media after the race about the timing of that final caution. NASCAR held the caution for fluid a long time; many drivers were vocal about fluid on the track for about 10 laps before the yellow flew. The timing of the caution did allow Busch to inherit the race lead after pit stops. Had it flown before it did, Busch would have still gotten back onto the lead lap via the free pass, but would have had to work his way through the field to get to the front. There is no fault on Busch here, but many fans were upset with the situation, questioning whether NASCAR was playing favorites to make a feel-good story a little more likely.

Martin Truex Jr., Furniture Row Racing: Truex ran, for the most part, better than he finished. A victim of the timing of the final caution, Truex ran inside the top 10 for much of the race before settling for 12th. With the incredible consistency the team has found this year, it’s hard to reason why they’d want to change manufacturers for 2016. Sure they might get more from the individual company, but they’d lose the information sharing that they now have with Richard Childress Racing and its other satellites.

Allmendinger, JTG Daugherty Racing: Allmendinger also looked capable of a top-10 finish for much of the day, but his 13th-place run wasn’t far off. This team has struggled a little compared to 2014 and don’t quite have the form they showed then. A solid top 15 was exactly what the No. 47 bunch needed this week.

Mears, Germain Racing: Mears was able to use pit strategy to his advantage this week, overcoming an ill-handling car in the process. That’s something the No. 13 team hasn’t been able to do before this year: overcome adversity during a race. Mears is also in his best points position since 2008. He signed a contract extension earlier this week as well, and it was well- and hard-earned. Mears finished 16th this week, his best finish at New Hampshire since 2009