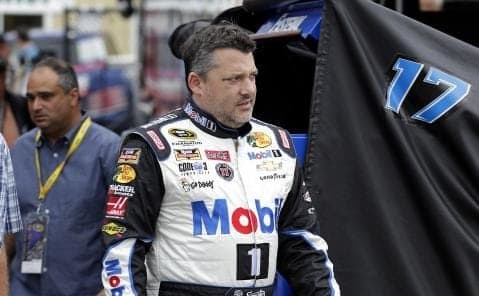 Beating up on NASCAR these days is all too easy. Beating up on Tony Stewart? He does that to himself every week. The most serious slump in the Cup Series shows no signs of slowing, with Smoke a whopping 132 points outside the Chase heading to Indianapolis this weekend. 26th in the standings, earning just one top-10 finish all year, Kyle Busch is likely to jump him by the time the regular season wraps up at Richmond. Yes, it really is that bad; you’ve got a three-time champion, placed in top-tier equipment, getting passed by a guy who missed the season’s first 11 races.

Stewart’s shoddy summer was highlighted by a press conference last week that had many questioning whether it was Smoke or Eeyore answering on the other line. Speaking in a somber tone, Stewart fended off questions of retirement while making no excuses for what’s easily the worst 19-race stretch of his career. While making the Chase is still possible – the series heads to one of Stewart’s best tracks, Indianapolis, this weekend – in all likelihood the No. 14 team is already focused on rebuilding for 2016.

Some feel like Stewart, the same age as a retiring Jeff Gordon (44), should join his rival in sailing off into the sunset. For now, it doesn’t look like that will happen, but what are the chances realistically Smoke will experience a revival?

To answer that question, we turn to history and a look at how some veterans wound up their careers. While everyone is different, Stewart sits at a pivotal age after which most driver skills have begun to decline. Consider….

Richard Petty: At age 44, NASCAR’s “King” was two years removed from his last title, dropping to eighth in points that season – his worst performance since 1965. The next year, he was winless at 45, earned just five more victories and was never a serious title contender the rest of his career.

David Pearson: The “Silver Fox” was fired at 44 from the best ride he’d ever known – the famed Wood Brothers’ No. 21. Following an awkward incident at Darlington where the tires fell off his car, Pearson found himself unemployed and would win just once the remainder of his Cup Series career. He never ran more than 12 races in a season after that.

Darrell Waltrip: Everyone knows how “Boogity, boogity, boogity” was looked at by some as a booger clogging up the Cup Series tour in the late 1990s. Waltrip, choosing to own his own team at age 44, never finished inside the top five in the Cup standings the rest of his career. By age 45, he was done winning and spent the next eight years mostly riding around at the back of the field.

Cale Yarborough: At age 44, Yarborough still ran strong, winning four times and capturing the 1983 Daytona 500. But within two years, he had won his final Cup race and was fully retired from the sport by the end of 1988.

Dale Earnhardt: Earnhardt, at Stewart’s age, was going through what would later be known as a “changing of the guard.” Losing an eighth Cup title to a young upstart named Jeff Gordon, the Intimidator went on a slow but downhill slide after that. A serious shoulder injury the following year dashed all hopes of a title; the next one (1997) resulted in his first winless season since 1981. Earnhardt was runner-up in points in 2000 but that was based more on consistency; his 24 top 10s balanced out a year with only two victories.

Certainly, there have been exceptions to this rule: Harry Gant and Mark Martin come to mind. Gant, the most successful NASCAR driver ever in his 50s, once won four races in a row on the circuit at age 51. Martin, who ran runner-up to Jimmie Johnson for the title in ’09 saw his career reborn with Hendrick Motorsports. But considering Stewart drives Hendrick equipment now, one has to ask the question whether he could ever be in a better scenario. One team can only remain on top for so long; Stewart’s group, with reigning champion Kevin Harvick in its stable could not ask for better information and support. Even if crew chief Chad Johnston gets let go, chances are Smoke won’t nab a crew chief who’s had a ton more success. In some ways, there’s nowhere to go but down at the No. 14 Chevrolet.

That’s not to say it’s easy to walk out on a sport you’ve loved. Just ask Waltrip, Yarborough or Petty at age 44 if they wanted to quit. The realities of retirement aren’t easy for athletes, starting over with a full 30-40 years of good health left to go. Building a second career isn’t easy when you’ve already had the best work environment you’d ever produce. Add in the complexity of Stewart, still reeling from a leg injury plus the Kevin Ward Jr. tragedy last year and it’s clear the decision ahead isn’t easy.

Yet it’s also one history says is on the horizon. Sadly, the one person NASCAR drivers can never outrace is Father Time.