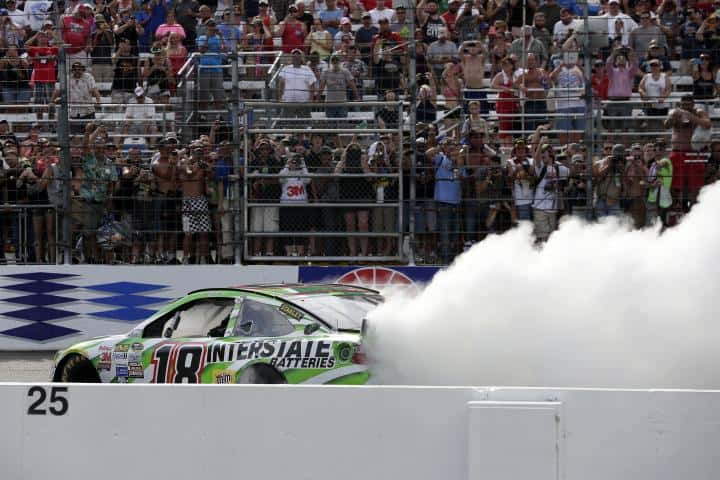 Sunday’s Sprint Cup race in Loudon was all about the heat. Several drivers complained, and even a couple were treated afterward, for issues resulting from the extra hot temperatures on the track. But no one, right now, is hotter than Kyle Busch.

Yes, we’re talking about Kyle Busch. He’s not just inching his way toward that 30th spot in the points standings, he’s playing his own game of leap frog. After winning for the third time in four races, Busch is now just 58 points behind David Gilliland for that 30th spot. Busch, who missed the first 11 races of 2015 because of injuries suffered in the season-opening Xfinity Series race in Daytona, has proven he not only belongs in the Chase, but at this rate, would be one of the favorites to win the Sprint Cup championship. For a while it seemed like there would be some question if the driver of the No. 18 Toyota for Joe Gibbs Racing would be able to score enough points. Now, it seems like it’s just going to be a mere formality for him to reach the top 30. Busch’s run also brings up another question: if a driver wins a certain amount of races, let’s say three for example, should that driver automatically be allowed in the Chase? While it will almost be a given for that driver to be in the top 30 in points, it might not be a bad rule to have if someone misses time due to injury, like Busch did.

You know when you saw that Adam Sandler was returning to his home state to give the command, it would be a good one. Sandler didn’t disappoint, and you especially had to like that he mentioned the military personnel still serving, before he gave his rousing command.

And while the weather was plenty hot Sunday, nothing was quite as physically hot as Alex Bowman’s right front tire. It caught fire and even after the pit crew changed it, it really caught fire again as Bowman tried to exit the pits. Luckily, Bowman got out of the car quickly as the fire was extinguished.

Brad Keselowski has his win this year, and he knocked on the door to get another one Sunday, but it just didn’t work out in the end. Keselowski led a race-high 100 laps at Loudon, and that shows it is just a matter of time before the No. 2 car ends up back in Victory Lane. Keselowski likes to point out that the way the Chase is set up now that it is all about wins, so don’t be surprised to see him and crew chief Paul Wolfe take an occasional gamble to get another win or two before the Chase starts.

And since this is the tire rub section, this kind of track helped breed plenty of them Sunday. There was Paul Menard, Justin Allgaier and Clint Bowyer, just to name a few, that had to deal with that malady. The tire rub is kind of a natural result of what can happen on flat, hot and slick track. Really, it was good to see that kind of racing, where the drivers have to work to make the cars work best, even though it was on an extraordinarily hot day.

Jamie McMurray is the top driver in points who does not have a win this year. He nursed home a sick engine to 26th place Sunday. Since he doesn’t have a win yet, he can’t afford too many more days like this. McMurray currently sits ninth in points, and he does have a 72-point cushion over the final current Chase qualifier, Aric Almirola. However, assuming Busch reaches the top 30 in the standings, the next driver who would make it on points right now is Menard, who McMurray leads by 46 markers. So that’s the real cushion for McMurray, whose seven top-10 finishes this year are the least among the top 11 in points. Indianapolis has been good to him in the past as he does have a win there, so maybe there are better days ahead this weekend for the driver of the No. 1 car.

It’s been a pretty rough season for Roush Fenway Racing and Sunday was a pretty rough day for the Ford team. Their three cars combined to finish 17th, 27th and 32nd. So you might think well, maybe the Fords just don’t run well at this track. But the Team Penske Fords were second and fourth, so, you know, that argument doesn’t fly. Clearly the Roush teams have a long ways to go before they can be considered serious contenders again.

A short flat track would seem to be a good place for a driver like Kyle Larson, but as has often been the case this year, he was never in this one Sunday, finishing two laps down in 31st. Larson looked like an up and coming star last year, but now, as he sits 21st in points, 85 behind Almirola for the current final Chase spot, but more importantly 111 behind Menard, who in reality occupies the final Chase spot, assuming Busch reaches the top 30 in points.

Clint Bowyer’s day didn’t turn out so good either as he finished 34th four laps off of the lead. Bowyer was hurt by a tire rub that forced him to pit, but he had an ill-handling car much of the day. Bowyer now sits two points behind Almirola and 28 behind Menard. Bowyer has just one top-five and six top-10 finishes this season, and you know the usually vocal driver of the No. 15 Toyota can’t be happy at all about that.

In just a few short weeks, Kyle went from championship afterthought to favorite! It looks as if for the first time in his career, he’s finally got his act together. He is becoming the driver everyone thought he would be when he first came into the sport, and that is BAD NEWS for the competition. They’re REALLY going to have to step up their game in order to keep up with the pace he is currently setting.