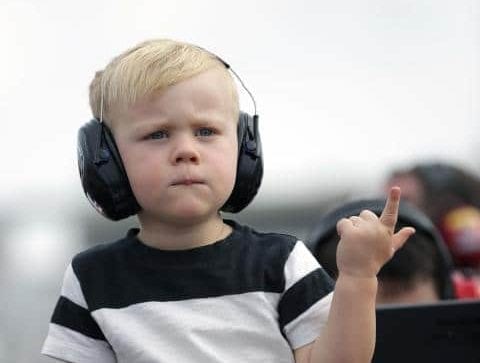 Running an off-road R/C truck at TJ Bell and Scott Speed's track. I am a weapon out here! pic.twitter.com/8eCKVBS7wQ

Tony Stewart had some fun last week as he had an opportunity to race a different kind of vehicle. Stewart put down a steering wheel for a remote controlled R/C truck at a place owned by TJ Bell and Scott Speed. Racing an R/C car would seem to be a lot of fun!

Kevin Harvick and his son had some fun last Thursday at the gym just before heading to the New Hampshire Motor Speedway. Harvick posted this photo of his son Keelan joining him in his workout. It’s safe to say that Keelan is beginning his steps to becoming a professional racecar driver just like his father.

In the shade of a small apple tree a hundred yards off our front door. pic.twitter.com/td6X8cj7u0

Dale Earnhardt Jr. posted this beautiful photo of a deer that he spotted just outside his front door. Earnhardt mentioned that the deer stood around an apple tree on the property. This is one of the prettiest photos that you will ever see.

Joey Logano tested his skills on the golf course just before the weekend started at the New Hampshire Motor Speedway. The golf tournament benefited the Joey Logano Foundation and Racing for Hope in Connecticut. It’s safe to say, playing golf would be a lot of fun!

Meet me at that Ferris wheel at 10:15. Like to shake your hand and say hi. https://t.co/tSCPrqphqu

Clint Bowyer took some time out of his busy race weekend to meet some fans outside the Toyota Ferris Wheel. It seems Bowyer made several new fans by doing this. Seeing the drivers interact with the fans is what makes the sport one of the greatest.

A tough day at the office, we just couldn't recovery from the green flag speeding penalty…

By the way, slow it down @KyleBusch!

Despite having a bad weekend at New Hampshire, Jimmie Johnson showed a perfect example of how to overcome a bad performance. Johnson joked that Kyle Busch should slow down on the track as he captured his third Sprint Cup Series win in the last four races on Sunday. Every athlete, whether on a professional or amateur level, should use this example of sportsmanship from Johnson.

Busch shared this adorable photo of his son Brexton and wife Samantha celebrating in Victory Lane following his win at New Hampshire. Brexton had a cute shirt reading “Dad’s Biggest Fan” while his father held him up. Safe to say that they’ll have plenty of options available for Christmas cards for the upcoming holiday season.

Caution's out. Forever. Enjoy the offseason, see you at Daytona… in 2018. pic.twitter.com/FIHwlY0elc

If you watched this past weekend’s Sprint Cup Series event, you know that the biggest topic out there was the concern about water bottles bringing out the caution. NASCAR Wonka had some fun with the topic by posting this photo on Twitter. Let’s just say, that is a lot of plastic bottles.

With the summer temperatures being a major discussion in weather lately, NASCARCasm has found a solution to beat the heat at the Indianapolis Motor Speedway. NASCARCasm pitched this idea to the 2.5-mile track, saying they should add a pool between the track and pit road. Let’s just say, this idea might be rejected.