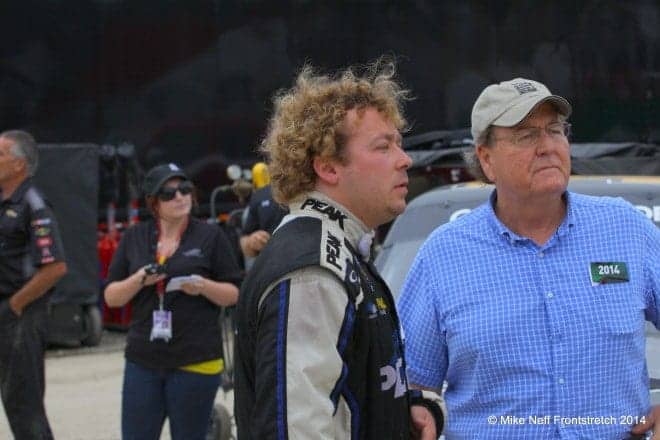 ROSSBURG, Oh. – One year after failing to qualify, Cody Erickson redeemed himself in the third annual 1-800-Car-Cash Mud Summer Classic.

Erickson, a veteran of dirt-track racing, drove from fourth to the lead in the first two turns and held off a hard-charging Ben Kennedy to win the race’s last-chance qualifier and advance to the 150-lap feature at Eldora Speedway.

A year after failing to make the popular NASCAR Camping World Truck Series event, Erickson tried to soak in what he’d accomplished.

“It feels good,” said Erickson. “I didn’t think I’d be up front right away, but it kind of just worked out, and we rode it out. Now it’ll just be interesting to make the whole race and see where we end up.”

Starting in fourth, Erickson appeared to be in danger of claiming one of the two transfer spots in the last-chance qualified. However, to his surprise, a hole opened for Erickson to move forward when first-place starter Jennifer Jo Cobb dove to the middle in turn 1.

Seeing a chance to take the lead, Erickson wheeled his No. 35 Empire Driver Development Chevrolet around the outside lane, passing Jo Cobb and Kennedy coming off turn 2.

“I drove in there, I knew that top guy (Jo Cobb) was going to go down,” said Erickson. “I lucked out. Just came through the center and everyone stayed underneath me, so I kind of got up in the preferred line.”

While Erickson inherited the lead, he would have to fight to keep it. Red Horse Racing driver Kennedy charged in the late stages of the race, diving under Erickson in an attempt to take the lead. Not wanting to push the issue, Erickson maintained his line up against the wall, holding off Kennedy and driving to the victory.

“I knew he was down there,” said Erickson. “I knew it was going to be slick, so I just kept on running my line. He kept showing the nose, but I knew we were both in the show, and I thought “He ain’t gonna take both of us out for the win in that deal. It wasn’t the way we wanted to get in, but we’ll just kind of work on it from here.

“I just lucked out. If they would have had a better start, I would have ended up third. We’ll see how this big race goes.”

Erickson would finish 25th in the 150-lap feature, ahead of former winners in the series including Brad Keselowski, Cole Custer and Travis Kvapil.