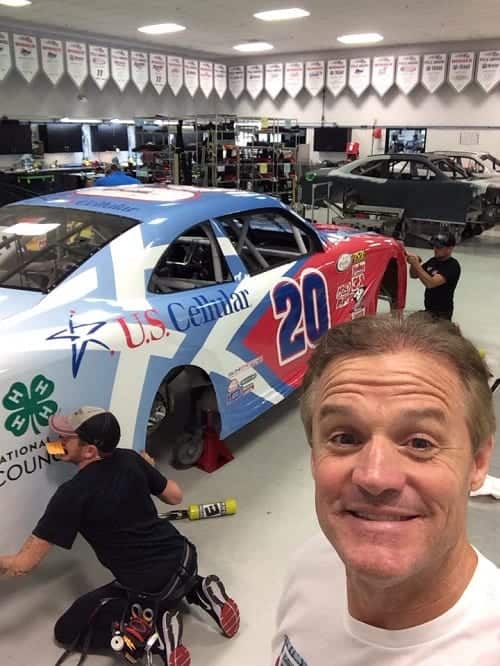 The infamous “R-word” is one that not many people like to hear. But after a few years of throwing it around, one driver is ready to end his career.

In September, it will have been 27 years since Kenny Wallace made his debut in what was then the Busch Grand National Series for Dale Earnhardt Inc.

But after years of being NASCAR’s unofficial comedian, the youngest of the three Wallace brothers is set to strap behind the wheel of a stock car for the final time.

“Well, 2011 was my last full-time season,” Wallace tells Frontstretch. “We finished seventh in points in the Xfinity Series. In 2012, ’13 and ’14, I ran a handful of races. The reason that I decided to retire is that I’ll be 52 years old on Aug. 23, and really, the timing is right. It takes too much effort to get a car together. People always want a lot of money. People always want me to bring money. I don’t bring money anymore. My whole career, I got paid money. They paid me. I don’t like that new concept where people want you to bring money.”

The St. Louis native will run his final NASCAR-sanctioned event on Aug. 1 at Iowa Speedway, racing for Joe Gibbs Racing in the No. 20 Toyota, which currently sits third in the Xfinity Series owner standings.

Thank You @USCellular and @JoeGibbsRacing "My Seat" drivers compartment is perfect. We are ready for @iowaspeedway pic.twitter.com/05VSU2SP8t

When all is said and done, Wallace will have 905 starts across NASCAR’s three national series, giving him the record for most events in the Xfinity Series. Iowa will mark his 547th career event, 52 races ahead of his elder brother, Mike Wallace.

“They approached me,” Wallace says about the opportunity to race for JGR. “They knew I had a nice sponsor. They didn’t have a driver, and they were looking for one because the Cup Series is over there in Pocono, and they didn’t have anybody for the car. They called me and I had the U.S. Cellular sponsorship, and that was a pretty big honor for them to ask me to drive.”

Wallace has raced part-time in the Xfinity Series since 2012, when he ran 14 events for RAB Racing (with one in conjunction with SR2 Motorsports). It was the Robby Benton-owned team that helped revive his career in 2011 after spending the majority of three seasons with Jay Robinson’s No. 28 U.S. Border Patrol squad. From 2008 to 2010, he had just three top 10s. However, when he joined RAB, Wallace resurfaced as a threat for top 10s week-in and week-out, recording 11 on the year, the most he had since 2005.

Without you I would not be here Robby, THANK YOU ……… “@RobbyBenton: Do good @Kenny_Wallace :)” pic.twitter.com/SwamNQ65GY

But funding was at a minimum, and the team needed drivers with sponsors. In 2013, he ran seven events for the Toyota team, and only one in 2014. The extra step back wasn’t something of his own doing, but he originally retired from finding sponsorship. The amount of work it takes to get funding for just one event takes too much time, he said last year, and he didn’t mind running a race or two for Benton’s organization.

Throughout all of Wallace’s struggles, retirement didn’t enter his mind until recently.

“I felt like I was too young,” says Wallace. “That was when I was with the U.S. Border Patrol team. They were paying me a lot of money to drive that car, but I knew it was not a good team. It was a very low-level team. At the time, I didn’t feel like quitting. I drove the car to the best of my ability. They were just paying me so much money per race that I was making more money per race than people were that were winning, even though I was running bad. I knew it wasn’t my talent. Sometimes, you just don’t run well because of the car, so I knew it was the car and not me.”

Now, it’s going to be all about his wife. Wallace’s goal is to spend more time with his high school sweetheart and mother of their three daughters. Along with being a family man, which he already is, the soon to be 52-year-old has another career already lined up.

“I’m excited to start my TV career all over again,” he explains. “I’m looking forward to continuing to do TV. One of the reasons that I announced my retirement is so I can go all-in with TV now. You tend to try to think it’s not a distraction, but it is. It’s unfair for me to race when TV has invested a lot of money in me to help on TV. It was more of a distraction for them than it was for me. I want to be fair and focused.”

Whenever Wallace raced in the Xfinity Series, he would have to seek permission for his bosses at FOX Sports, with whom he’s worked full-time for several years. A few months ago, JGL Racing approached him to replace brother Mike at Talladega after he had triple bypass heart surgery. Stepping behind the wheel of the No. 26 Toyota, he finished 38th after being involved in a 10-car wreck on lap 74. But the distraction for all parties involved is not worth it anymore, and it is time he can focus all of his eccentricity on his television work.

The opportunity for Iowa was one he couldn’t pass up. In eight starts at the .875-mile track, he has three top 10s, with a best finish of sixth coming in 2011. Racing in a top-tier car for the first time in several years, expectations are high for a man that is preparing to ride off into the sunset.

“It’s a lot of pressure to drive that car because I know it’s a good car. If I run bad, it’s going to be my fault. I don’t want it to be my fault; I want to run well. Our goal is a top-five finish. The car finished third the last time it was there with Erik Jones in it.”

As one generation of the Wallace family comes to a close, another is starting up. The 250-mile race will mark the first time that Wallace will race against his nephew, 19-year-old Matt Wallace, Mike’s son. He raced for JGL at Loudon, running inside the top 25 before parking the car after 84 laps due to a vibration. In the past, Kenny had the opportunity to race against Steve Wallace – the son of the most successful of the three brothers, 1989 Cup Series champion Rusty Wallace. But Steve hasn’t raced since 2013, and Iowa will be the first time since Sept. 2013 at Chicagoland Speedway that he will race against a family member.

“I’m really excited for Matt,” Wallace said with much enthusiasm. “He’s a great kid and a really good driver. He’s just coming onto the scene. A lot of people are going to start noticing him. When I watch him race, he wins. I watched him down at New Smyrna during Speedweeks and he won. He’s doing a really good job at trying to get a break right now. I love him very much. I support him, and I’m just excited about racing with him because I’ve never raced with him.”

Retiring in the same year as four-time Cup champion Jeff Gordon, Wallace is able to walk out on top. Recently, Gordon offered some humbling words for the three-time Xfinity Series Most Popular Driver.

“I think I want my legacy to be that I was a racer,” Wallace explained. “Jeff Gordon gave me the ultimate compliment on [the] FOX Sports 1 Loudon pre-race show on Sunday. Jeff Gordon said Kenny is a racer, and that is what I want my legacy to be. Kenny Wallace is a racecar driver and he likes to race. I’m not great. I’m not a really good Cup driver, but I was a good Xfinity driver with nine wins.”

THANK YOU to @JeffGordonWeb for calling me "A Racer". That's the Ultimate compliment a RACER can hear. pic.twitter.com/mCVqqVaewp

Make no mistake, this is not just retirement for Wallace. He will continue racing his dirt car, something that he has a deep passion for. His bright yellow and black No. 36 car will continue traveling across the country on a weekly basis. He will continue to showcase his bright smile and one-of-a-kind laugh on FOX Sports for years to come, along with keeping everyone quite entertained on social media as per usual.

“I’m different. I’m a weirdo. My bosses like me because they say I come at everything with a different point-of-view.”

Can this hyper poodle retire from the booth as well. The PTB actually believe that fans like watching him shill for his paycheck, just like they are mistaken that the fan base is enamored with the Waltrip brothers.