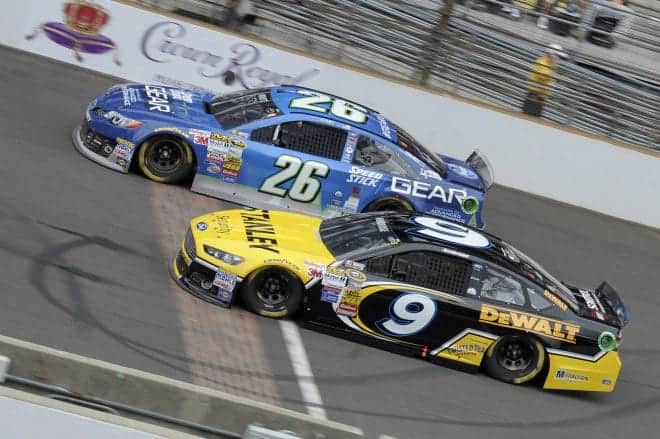 Eldora has come and gone, and with its passing, we hit the back half of NASCAR’s summer stretch before autumn rolls around and the Chase begins. The dirt race was once again a show to remember, and it serves as a bright spot in the overall NASCAR schedule, sandwiched in between two Sprint Cup races that many would say are lacking in terms of excitement — New Hampshire and Indianapolis.

This year, however, Indianapolis holds some intrigue because it serves as the debut of the high-downforce package that NASCAR has been working on. Might the draft make an appearance? Will drivers who pull double-duty in the Xfinity Series be the ones to beat on Sunday, using that experience to their advantage? Only time will tell. Let’s take a closer look at the storylines to watch this weekend….

1. Will Indianapolis be a race to remember for the right reasons?

It’s no secret that Indianapolis has put on a lot of – what shall we call them? – snoozefests in recent years. Everybody knows what happened in 2008, and while that was truly a low point for the Sprint Cup Series and Goodyear, the races in recent years haven’t been that much more exciting.

But if the race at Kentucky Speedway two weeks ago was any indication, playing around with the downforce package can be a good thing. And for this weekend’s race at the Brickyard, both Sprint Cup and Xfinity teams will race with a high downforce package, including a 43-inch radiator pan, a 2-inch splitter, a 1-inch wicker bill and a huge 9-inch spoiler.

What this package is supposed to do is create a larger opportunity for drivers to use the draft along the straightaways. If it works, it would be a great thing for the sport. Let’s face it: bulky stock cars were never meant for fast, flat corners like Indy has. Put ‘em on a short, flat track where they can beat and bang all day long and fans are treated to a great show. No one should expect this package to create an IndyCar-style event, with slingshot passes and nobody wanting to lead at the white flag because the draft is so potent. But if drivers can maneuver around more and pass easily, like we saw at Kentucky, the show will be markedly better.

2. How will Chase Elliott and Ryan Blaney fare in their first Cup race at the Brickyard?

This weekend marks the Sprint Cup debuts of Chase Elliott and Ryan Blaney at Indianapolis Motor Speedway. Both drivers will be piloting the top-flight equipment of Hendrick Motorsports and Wood Brothers Racing (with support from Team Penske), respectively. While we shouldn’t expect them to go out and win the race, both of these teams have shown speed this season, and the drivers’ talent is undeniable. So how might they finish?

Elliott’s experience in the Xfinity Series should serve him well in preparation for the event. He finished 12th in last year’s NXS race and he’ll once again race on Saturday this year as he pursues his second championship. The track time itself is nice, but considering both the Xfinity and Cup series will be racing a high-downforce package, that might give Elliott an advantage going into Sunday’s race. Combine that with the nine Brickyard wins between his teammates Jeff Gordon and Jimmie Johnson, and Elliott fans shouldn’t be surprised with a top-15 run.

Blaney, on the other hand, has one Cup start at Indianapolis, running the event in Tommy Baldwin Racing’s No. 36 in 2012, finishing 27th. He hasn’t visited the track since but he too will race in the NXS event in Roger Penske’s No. 22. As with Elliott, the extra track time with the new package will be nothing but an advantage for Blaney. Add in the technical alliance with Team Penske, whose drivers Joey Logano and Brad Keselowski have been strong contenders on the flat tracks the last couple of seasons, and Blaney has plenty of people he could lean on for additional help. The one thing going against Blaney is that he has blown a motor in three of seven starts this season. If he starts the race with a solid engine, Blaney should be able to grab a top 20.

3. Will Silly Season pick up now that August is nearly upon us?

Nowadays, team owners and drivers are more apt to share news of signing new talent or leaving for greener pastures earlier in the season. Several months ago, we found out that Elliott would be taking over for Gordon in 2016 and that AJ Allmendinger signed a five-year contract extension. Heck, some drivers announce movement years in advance. Remember when Kasey Kahne announced his intentions of moving to Hendrick in 2012, but it was 2010 when the announcement was made?

While plans are, in fact, being announced earlier, August and September still serve as the time when most changes for the next season are announced. So what can we look forward to over the next few months? Decisions regarding Danica Patrick’s ride and sponsor, Furniture Row Racing’s manufacturer and more.

Johnson will no doubt be behind the wheel of the No. 48 next season, but who will sponsor him? Lowe’s contract is up at the end of this season, and it is one of the final turnkey sponsors in the Cup Series. Perhaps we’ll see AARP, which currently sponsors Gordon but will likely want to partner with someone older than Gordon’s replacement in Elliott, move over to the six-time champion’s ride.

Will Brian Vickers return to the No. 55 Michael Waltrip Racing machine next year? While Vickers wants to should he be medically cleared, Motorsport.com reported Thursday that Waltrip’s co-owner Robert Kauffman is happy with David Ragan and that Ragan may be the key to getting sponsor Aaron’s back on the car next season. And will Kauffman even stick around with Toyota or move to align with Chip Ganassi Racing or Richard Childress Racing and run Chevys for Clint Bowyer and Ragan/Vickers?

4. Where could the Truck Series add a second dirt race?

Eldora has been an unabashed success. Seeing 32 heavy Camping World Truck Series entries go four-wide at a little track in the cornfields of Ohio… well, there’s just something magical about it. Returning the sport to its roots in 2013 was one of the best decisions NASCAR has made in the last few years.

So, when will they expand to a second dirt race?

The odds of getting an Xfinity or Cup series race on dirt are not that great. Perhaps we’ll see an NXS race in a decade, but for Cup, it’s unlikely because there will never be enough seats to fill.

The trucks, however, are a different story. Three tracks immediately jump to mind. First, Speedway Motorsports owns fantastic dirt facilities at Las Vegas and Charlotte. They each have adequate seating, are in markets that the series already visits, and could take a cookie-cutter track off the schedule if the powers that be don’t want to add another race. Racing in the dirt at Charlotte the week of NASCAR’s Sprint All-Star Race would also give the trucks a marquee event that the 1.5-mile oval can’t provide. Plus, being close to many of the teams’ shops means they don’t have to spend as much traveling and lodging their crews.

If we’re looking to add another track with a rich history like Eldora has, look no further than Knoxville Raceway in Iowa. The Sprint Car Capital of the World, Knoxville is known for its yearly Nationals event that draws the best World of Outlaws drivers from across the country. The track is 5/8th of a mile, wildly popular and holds nearly 25,000 seats. Like Eldora, Knoxville has name recognition, so pairing up the Truck Series with this track will immediately get people excited about the event.