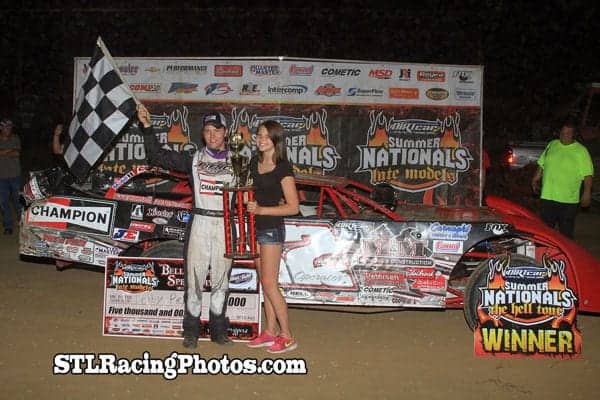 It’s not always smart to use hyperbole, but sometimes it’s warranted: Bobby Pierce could be one of the next big stars in NASCAR.

OK, maybe not. Perhaps the name Bobby Pierce will only surface during the NASCAR dirt race(s) each year or in relevant events in the dirt racing community. Maybe his second-place finish Wednesday night in the Camping World Truck Series race at Eldora Speedway will be the peak his NASCAR career reaches.

But here’s something you may not know: Pierce is in good company.

And that’s not speaking to the fact that Pierce slotted his No. 63 truck onto the pole for the Eldora race in his first series start, joining a group that previously consisted of Bobby Hamilton, Kerry Earnhardt, Alex Tagliani and Ron Hornaday Jr. That’s an impressive group all its own.

Instead, his claim to fame now lies with the team with whom Pierce scored his runner-up finish.

When Pierce came in second to eventual winner Christopher Bell earlier this week, he did so with equipment supplied by the Mittler Brothers. And that name – Mittler – could be the deciding factor in his NASCAR career, should he choose to pursue it.

You may not be familiar with the name Mittler. You might not know of Mike Mittler, who owns Missouri-based MB Motorsports. If you’re only a casual viewer of the Truck Series both now and then, it’s certainly not a strange concept, either.

But what works in Pierce’s favor is that team, MB Motorsports. It’s a group that has quite the solid track record when it comes to its former competitors.

Mittler’s team was there when the series began, first fielding a truck in four races in its inaugural 1995 season. He’s since entered trucks each and every season, doing so in varying capacities – whether it’s a true part-time season or one that may be full-time, but with other teams taking his points in certain races (see: JR Heffner in 2014, among others).

And with that 20-year career comes quite the roster of former drivers, some of whom have gone on to big things. Carl Edwards? Drove seven races for Mittler in 2002, earning the team its first top 10. Justin Allgaier? Eight starts in the mid-2000s. Jamie McMurray first popped up in NASCAR with a handful of races for the team in 1999. Brad Keselowski was there in 2006, Regan Smith in 2002, even Mike Wallace in 1995. And they’re not even the only racers who’ve ended up in the Sprint Cup Series.

Make no mistake: for each success story that has come through MB Motorsports and its No. 63 truck program, plenty have fizzled out without much of a history. Drivers like Chris Wimmer, David Stover, Cameron Dodson and Jack Smith are generally only known in NASCAR circles if a fan is up-to-date on their NASCAR trivia or knew the drivers from previous and post-NASCAR lives.

How is Pierce different? So far, he has something no other driver has ever accomplished in a MB Motorsports truck: a top five.

In fact, even a top 10 has been hard to come by. Edwards’s eighth-place run at Kansas Speedway in 2002 was Mittler’s only top 10 before then, making Pierce’s second their best run by six spots and 24 positions above the team average of 26th.

That’s what makes Pierce someone to watch. Had he pulled off a second-place run and a pole with one of the series’ bests, like a Kyle Busch Motorsports or ThorSport Racing type, his triumph would have been noteworthy – like Bell’s win, certainly – but may not have been touted as a runaway success. One could chalk it up to a dirt-track ringer who simply got in with a good team. Instead, he did what he did with a team that is rarely near the front, one that the average NASCAR fan may not even know. We certainly don’t expect Mittler’s No. 63 in the top 10, let alone in the lead.

What does that mean going forward? Perhaps nothing, but you can be sure that Pierce will field some offers to run more races in NASCAR. It’ll almost certainly be asphalt given Eldora’s standing as the only dirt track on the schedule; however, that’s not necessarily a problem. Plenty have come from dirt and transitioned to NASCAR’s bread and butter without too much of a struggle, and if Pierce is able to knock a race at a Martinsville Speedway-type out of the park as well, it’s not tough to envision him in more NASCAR rides in the future.

It’ll be a matter of what Pierce wants, as well as how his career unfolds over the next few months and even years. He could very easily only surface on the TV screens of NASCAR fans when the Truck Series hits Eldora each year.

We also could have seen the first act in a lucrative stock car career for Bobby Pierce.