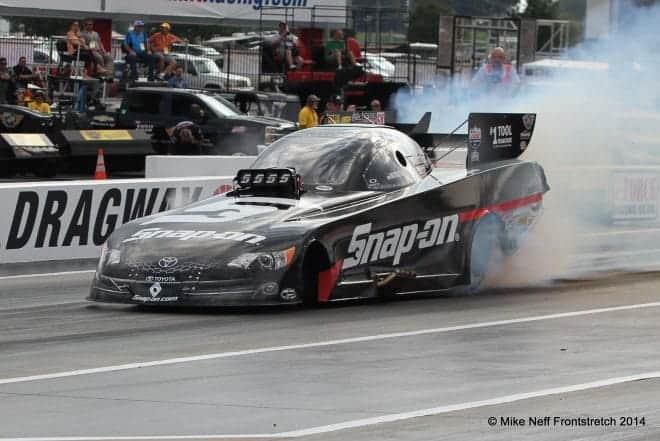 With the excitement of the new TV deal out of the way, it’s time to pick back up with a look at how some of the drivers of the NHRA are faring at midseason. In other words, it’s time for more report cards. This week, it’s Funny Car.

If you drive for Don Schumacher, it’s a pretty good year. The lowest of his four entries is today’s profile driver, Tommy Johnson Jr., who sits sixth. For the drivers behind that, it’s a bit of a mixed bag. For seventh-place Cruz Pedregon, it’s a mediocre year. For independent single-car owner Tim Wilkerson, eighth against the multi-car behemoths is a pretty good showing.

For Robert Hight in ninth and Alexis DeJoria in 10th, it’s crunch time and a turnaround is in order. For both of these drivers, sitting on the cusp of losing a Countdown berth, it’s further puzzling, as each has a teammate in the top five (John Force in fifth for Hight and Del Worsham tied for third for DeJoria). The teammate factor is more in play for DeJoria than Hight, though. Her team is intact from last season and her teammate is excelling.

Hight’s team had some unrest as John Force Racing scrambled for funding over the offseason and experienced some changes in personnel as a result. His other teammate, Courtney Force, is also suffering from an off-year, currently sitting in 11th. After performing so well in 2014, 2015 does not seem to be the year of the woman, at least not in Funny Car.

For 12th-place John Hale, 155 points out of 10th, this has been a pretty successful year. Hale also drives for a small, single-car team, and he’s a rookie in the class. It’s not out of the realm of possibility, particularly as those ahead of him struggle, for Hale to sneak into a Countdown berth.

Next week, barring any other breaking news topics, we’ll take a look at the Pro Stock ranks.

2014 – Returned to full-time competition for the first time in six years with Don Schumacher Racing’s fourth car, an effort sponsored by Terry Chandler in support of Make-A-Wish; won at Bristol; No. 1 qualifier at Chicago; finished a career-high third in points.

2007 – Was No. 1 qualifier and race winner to sweep the weekend at Englishtown.

2002 – Made four final round appearances.

Some things most people don’t know about Tommy: Johnson Jr. is the most recent winner in the Funny Car category, taking home the Wally from the Route 66 Nationals last week. Next up on the schedule is Denver, where Tommy reached the first final round of his career in Super Gas in 1984. He didn’t win that day, but the guy who beat him was Chad Langdon, father of Shawn Langdon, who everyone knows as the driver of the AJR Top Fuel dragster and a former Top Fuel champion. Meanwhile, Johnson Jr. has also been to the final round at Denver in Top Alcohol Funny Car and Top Fuel. He is one of 12 drivers to post wins in both Funny Car and Top Fuel.

Finally, for the pop culture fans, a trivia fact: Ottumwa, Iowa, hometown of Johnson Jr., was the town the fictional character of Walter “Radar” O’Reilly was from on the television show M*A*S*H.

Johnson Jr. talks about probably the most heroic crew effort he’s ever seen.

All this Nitro, it’s time to check in with the Pro Stock ranks, and today’s Tech Fact takes care of that side of the NHRA. Gray Motorsports crew chief Justin Elkes talks about the effects weather can have on a Pro Stock car.

Number of the Week: 7

The most wins by any one driver at Bandimere Speedway in Denver, this week’s stop on the 2015 NHRA tour. Bob Glidden in Pro Stock owns the record. Joe Amato tops Top Fuel with six, John Force heads up Funny Car with six also, and Matt Hines is the leader in Pro Stock Motorcycle with four. Of these, only Force will be competing to try to extend his record this weekend.

The NHRA Mello Yello Drag Racing Series returns to action this weekend and embarks on the Western Swing, beginning with the Mopar Mile-High NHRA Nationals from Bandimere Speedway near Denver.