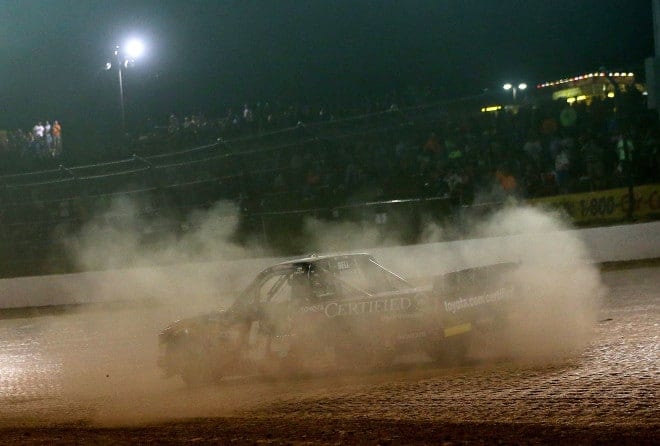 “It’s just unbelievable. If you told me two years ago my first win at Eldora would be in a truck, I would have told you you were crazy,” he told NASCAR on FOX reporter Matt Yocum in victory lane after taking the checkered flag. As for his battle with Pierce, he said “It’s pretty cool that a couple of dirt guys can run one-two at a dirt track.”

Bell becomes the third winner of the Mud Summer Classic in the race’s third running. He led 106 of 154 laps.

Pierce, making his Camping World Truck Series debut, won the pole position as well as his heat race, and finished second even though his truck nearly fell apart over the last twenty laps. “I know a lot of people before the race told me I was going to be the Kyle Larson [of this race],” he said of the damage—the deck lid came loose and settled atop the spoiler. “If I could have just got the restarts better, I could have had something for [Bell].”

Jones came into the race knowing Eldora was a huge wild card in his quest for the series championship. “It’s pretty easy to have a bad day here,” he said. “We just kind of stayed out of trouble all day. It wasn’t until the last 10 laps we got up into the top five. A good points day; nice to finish in front of the [No.] 88.”

Bell led following the first segment after NASCAR decided the sixth caution, which flew just shy of the 60-lap mark, would serve as the competition caution and allow the teams to pit. Bell, Nemechek, Austin Dillon and Pierce all led laps during the first segment.

Brad Keselowski, who ran mid-pack during the first segment, stayed out and led the field to the green for the second 50-lap segment. He was knocked sideways on the backstretch, and while he kept the truck straight, he dropped to seventh and eventually fell back through the field, ending up 18th at the time of the second competition caution.

Bell once again led at the end of the second segment, but elected not to pit. The majority of the field followed Bell’s lead, staying out and forgoing gas and tires.

Pierce was shuffled back behind Austin Dillon on an early restart during the second segment, falling 1.2 seconds behind Bell. A quick slide-job later, and Pierce regained the second spot.

Over the next seven laps, Pierce reeled Bell in and the two spent the next eight laps battling for the lead. It was during this run that the rear deck-lid of Pierce’s truck came loose and threatened to fall off. The damage didn’t hamper Pierce, who continued stalking Bell until a caution flew with 12 laps to go.

On the penultimate restart with five laps to go, Pierce had a tough time restarting and lost the second position to Austin Dillon. As the two battled for second, Bell jumped out to a large lead that was erased after Korbin Forrister spun with two laps to go.

Pierce spun the tires on the next restart but quickly pulled up behind Bell. Pierce drove it in deep on the final corner, but was unable to overcome Bell, who notched the victory in just his third series start.

For Bell’s Kyle Busch Motorsports team, it was their second consecutive win at Eldora. Darrell Wallace Jr. won in the same No. 54 last year.

Trucks raced door-to-door all night, sometimes going four wide through the corners. This led to a race-record 13 caution periods, mostly caused by lazy spins initiated by contact between two trucks. As a result, long green-flag runs were scarce. Case in point: over half of the first 60-lap segment was run under yellow.

Bell hasn’t been confirmed for any more races with KBM, but following his win and the departure of Justin Boston from the No. 54 earlier this month, it would appear the opportunity to continue racing in the Truck Series is strong.