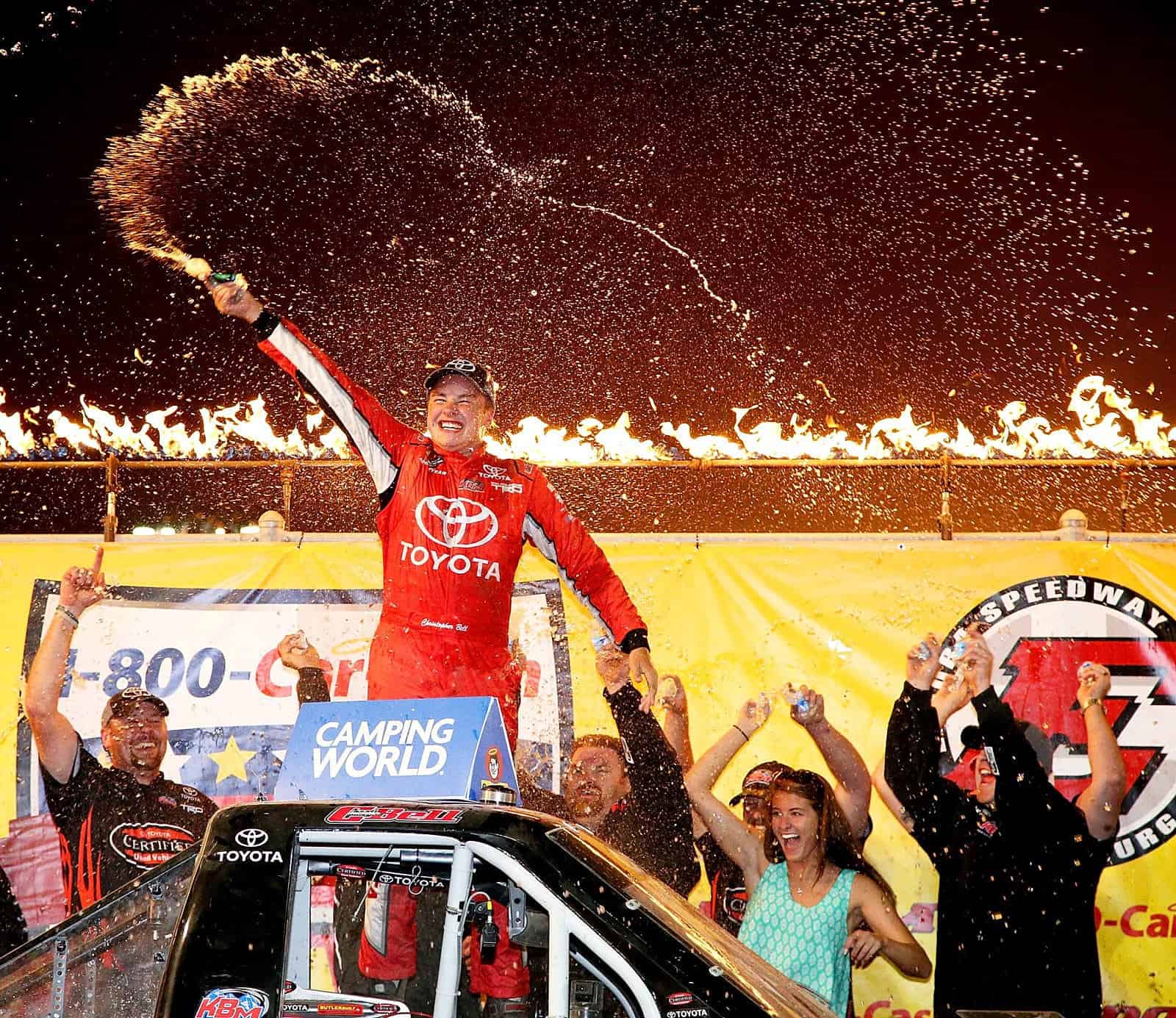 In a Nutshell: Dirt slinging, tires sliding, sheetmetal flying. It’s everything you ever wanted from a dirt race in NASCAR. Christopher Bell survived a flurry of cautions, including two in the final 12 laps, to take the win in the 1-800-Car-Cash Mud Summer Classic at Eldora Speedway Wednesday night. Bell emerged victorious in a green-white-checkered finish, scoring his first career victory in just his third career Truck Series start. Bobby Pierce finished second, followed by Tyler Reddick. Rookies Erik Jones and Daniel Hemric rounded out the top five.

Who Should Have Won: Bell and Pierce were the class of the field throughout the race. That shouldn’t come as too much of a surprise, especially since the duo have such tremendous numbers in dirt racing. In the end it was Bell, who led a race-high 102 laps, that out-dueled Pierce in the closing laps. In the process, they left pretty much everyone watching from home on the edge of their seat and the fans at the track on their feet and cheering.

Dirt late model standout Pierce made his Truck Series debut with a bang behind the wheel of a Mittler Bros.-prepared truck. After shocking the field and snagging the pole, Pierce went on to win his qualifying heat and backed up that performance in the feature. Sliding sideways for almost every lap before garnering a runner-up finish, the driver of the No. 63 had people singing his praises, a result that brought about a giant smile from longtime Truck Series owner Mike Mittler.

But the second-place run wasn’t without its challenges. Pierce got shuffled back on an early restart and looked like he wouldn’t be able to recover. Then, when he finally did get to the front again, Pierce engaged in several side-by-side battles with eventual winner Bell that could only be described as epic. He did so even when one of his many smacks to the wall in the closing laps loosened the bed cover on the back end of the truck, damage that looked like it might end his race. Instead, NASCAR let Pierce continue to race since the piece was tethered to the truck and wouldn’t cause a danger to spectators or competitors.

While it wasn’t a trip to Victory Lane, Pierce had said prior to the event that a top 10 would feel like a win. In the end, the teenager got more than he asked for, an eye-opening performance that stopped just short of Victory Lane.

“The last 10-15 laps, I was really going for it. After watching Kyle [Larson] beat the wall down last year, I knew these trucks could take a lot before they start falling apart,” Pierce said after the race. “Whenever I hit the wall with the truck, I made sure it was the back end. I tried to keep the front end out of it, but a couple of times we got up in there. That’s just what happens when you’re really going for it at the end.

“Christopher did an unbelievable job. Hats off to him. He raced clean the whole race, and then Tyler [Reddick] kind of sneaked up through the field in those last couple laps and got a good place for third. It was just a lot of fun, and beating the wall down is something I’m normally good at, so it’s been a great week.”

Consider for a moment that MB Motorsports is the same team I watched beat and bang on their heavily damaged truck after a practice wreck at Kansas Speedway a couple years ago because that was their only option. There was no backup truck… they simply had to make the repairs or pack up and head home. For a team with a budget that runs on a fraction of the financial backing Kyle Busch Motorsports, ThorSport, Brad Keselowski Racing and the like have each week, a second-place finish might as well be a championship win. Whether that success Wednesday night translates into anything more for the team remains to be seen, but it sure is great to see the little teams find a glimmer of hope in an otherwise tough field of competition.

The yellow stripes on the back bumper of Brad Keselowski‘s No. 29 Ford brought up several questions on Twitter, but it was just because he was a rookie at Eldora Speedway. Having never made a start on the half-mile clay oval, nestled about two hours northwest of Columbus, Ohio, Keselowski had a variety of reasons for running the race Wednesday night, not the least of which had a lot to do with learning about the racing at the track in terms of what it meant for the team.

While he struggled mightily with the handle on the truck, even slamming hard into the wall late in the race, Keselowski remained positive once he had time to cool down from the event.

Had a super fun day today besides being ate by a shark and wrecking in first dirt race start ?

Simply put, Keselowski had nothing to lose Wednesday night except maybe some money from damaged equipment. You can’t fault a driver wanting to be involved in what will arguably stand out as the race of the year across all three of the top series in NASCAR.

Points Update: Crafton maintained his spot atop the standings, though second-place Reddick trimmed that margin to just 14 points. Jones remains third, 24 markers behind Crafton. Johnny Sauter and John Wes Townley, who both suffered problems Wednesday night, round out the top five.

Hayley climbed one spot to sixth and sits 101 points back from the leader. On the strength of a fifth-place finish, Hemric jumped two positions while Timothy Peters lost two; the pair sits seventh and eighth, respectively. Gallagher, who dropped one spot, and Ben Kennedy round out the top 10.

“It’s just unbelievable. I’ve been coming here quite a few times and if you would have told me two years ago that my first win at Eldora was going to be in a truck, I would have told you you’re crazy. This is just fantastic. I’m just thrilled to be here. I’ll tell you that’s pretty awesome that Bobby and I could come here and run 1-2. I never heard of him until I was at a sprint car race last year and he was running his late model. It’s pretty cool that a couple of dirt guys could run 1-2 at a dirt racetrack.” –  Christopher Bell

“I was really going for it. I knew these trucks could take a lot before starting to fall apart. When I hit the wall, I tried to keep it to the back end but got the front some, too. It’s just what happens when you’re going for it at the end. If I could have just got the restarts better, I think I could have had something for him. It was a lot of fun. I’m out of breath.” – Bobby Pierce, finished second

We are somewhat happy with 2nd and 3rd. Great job by everyone tonight! Great to see dirt racers in the podium pic.twitter.com/qjjC1LxY9z

What a night! Finished 2nd in the Camping World Truck Mud Summer Classic! I want to thank everyone involved with… http://t.co/SwHkwSb1MJ

Up Next: The Camping World Truck Series heads to Pocono Raceway next weekend for the Pocono Mountains 150. Last year, Austin Dillon led a race-high 23 laps en route to a nearly two second victory over Sauter. Coverage begins at 1 p.m. ET on FoxSports 1; the race can also be heard on your local MRN affiliate or SiriusXM NASCAR channel 90.

stinking shame it was televised on a fox sports outpost station. was all set to watch and couldn’t find it. fsp1 here in atlanta had soccer and fox had some dribble show about talent or star.

The race was nothing more than an excuse for Brad K.to display his gigantic ego and his meager driving ability. Using pit strategy and his usual bull-in-a-china-shop driving style, Brad sniffed the front of the field before crashing out and finishing in the bottom five. OTOH, Kyle Busch gave Christopher Bell his ride as he did Bubba Wallace the year before. No one has given back more to the sport than Kyle yet the haters refuse see the difference between personality and character.

Yes, yes, by taking pay checks week after week away from drivers and teams struggling to survive in the Xfinity series Kyle has shown us just what an unselfish, giving person he is. Talented, driven, what ever adjective one chooses to use to describe him the noun should always be asshole. My personal choice of adjective is volcanic. By the way, how exactly does driving fans away from the secondary series by assuring that they will be non competitive give back to NASCAR?

OMG, what the heck is with LMARTIN…I wonder who this obsessed poster boy for KyleBu is? One of the handful, I guess. Pick another argument, you sound stupid in this argument. Plus there will never be a halo that can fit KYBU. As a fan you are embarrassing. Did you call the Vatican to have his name mentioned to become a saint? LOL and SMH. And you do realize that plenty have given many a chance, including the object of your hatred? Nah..blinders on no doubt, scary.

I was expecting a comment like this and Martin didn’t disappoint. I am no fan of Keselowski, but I liked his attitude from the beginning. He never raced on dirt so he was there to learn and dirt track racing is a whole different animal than what they race on every other week. He also has a stake in his truck team being successful, so I hardly call that ego driven.

And that comment about Kyle giving back to the sport was quite funny. The guy who takes all the prize money beating on the minor leaguers every week (to feed his ego) is quite the giver. From the same guy that put everyone that was in his way into the wall to win a race early in his career and pouted when he finished 2nd, I probably wouldn’t use the word character when describing Kyle either

Are you really that delusional Martin?

Don’t be fooled by this LMartin handle folks, it’s obviously Mark Martin! He’s upset that Kyle is going to outdo his win total in the secondary series.