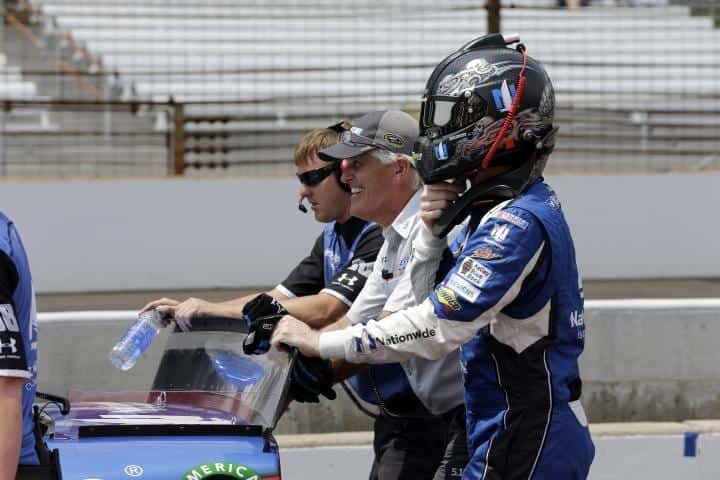 As the 20th anniversary of Dale Earnhardt’s lone triumph in the 1995 Brickyard 400 approaches, his son is now showing potential to accomplish the same feat.

Dale Earnhardt Jr. laid down a 181.466-mph lap to top the second practice session for Sunday’s Crown Royal Presents the Jeff Kyle 400 at the Brickyard at Indianapolis Motor Speedway.

Brad Keselowski ended the session in second after hitting a speed of 181.448 mph on a mock qualifying run. Keselowski, the 2012 NASCAR Sprint Cup Series champion, will look to give owner Roger Penske his first NASCAR victory at the Brickyard.

Jeff Gordon put down the sixth quickest time as he prepares for his final Indianapolis start with a speed of 181.189 mph. Martin Truex, Jr., David Ragan, Ryan Blaney and 2010 winner Jamie McMurray finished out the top 10.

The session was marred by strange cautions in the early going. Denny Hamlin, who topped the opening practice earlier in the day, was heading out to complete his first laps of second practice when his hood flew up over his windshield. Hamlin would finally make his way to the track late in the session, finishing 12th on the charts.

Another caution fell shortly after Hamlin’s incident when a large piece of lead fell out of Timmy Hill’s No. 98 Ford. No drivers made contact with the heavy weight and practice resumed upon its removal from the racing surface. Hill is driving his second race for low-budget Premium Motorsports after Josh Wise parted ways with the team earlier this month.

The NASCAR Sprint Cup Series will return for final practice at 4 p.m. ET.

Practice doesn’t mean anything. Johnson’s ego says “I want this one” and he’ll win it and cause a lot of TVs to be channel surfing. Johnson doesn’t have any “problem” that can’t be solved with “debris” caution adjustments. If he qualifies up front it won’t take him as long to lead.

Aaron… Don’t get your underwear in a bundle over the 2nd session of 3 scheduled practice sessions. The first 2 of which were for all purposes just test sessions with everyone on different agendas. Your “cheerleading” shows your lack of knowledge about Na$crap. Weather/time of day during practice 3 was closer to race conditions on Sunday. Your boy didn’t exactly lite the world up in practice 3.