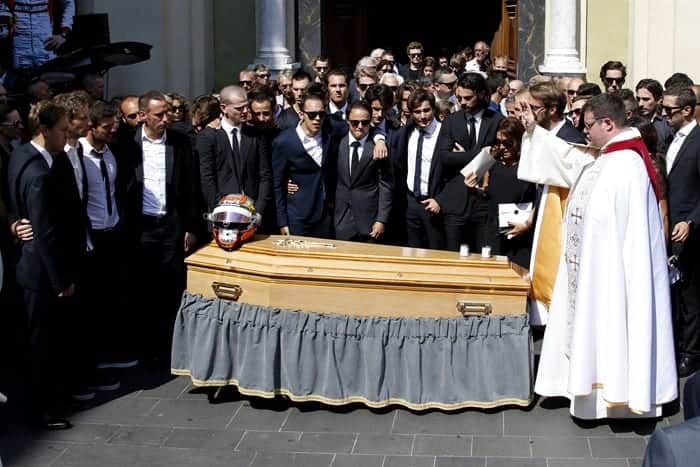 This week, funeral services were held for Jules Bianchi. The promising driver suffered an accident at Suzuka last year, losing control in the wet and hitting a crane that had moved on track to recover a car that had slid off in the same area a few laps prior. The circumstances are, for the purposes of this column not worth going into; racing is fraught with all kinds of dangers and how Formula 1 handled the incident will surely be something that receives scrutiny (and has already).

What should be the focus is that a Bianchi, who ostensibly encouraged the love of everyone who interacted with him, is no longer around. Many will make claims that he died doing what he loved and how much he enjoyed driving. Has anyone ever thought about that idea? There is an inherent contradiction with the concept.

Bianchi may have loved to drive. He also likely loved to compete. However, there’s something that goes beyond both of those ideas. To be able to drive, to compete, to be the affable presence in the paddock that everyone has stated he was, one must first enjoy living. That’s the bigger picture. Bianchi loved life, and driving held a prominent part of it.

Drivers are aware that what they are doing is dangerous but trends in safety management have mitigated some of that concern. Between advances in the car’s infrastructure, to track safety, to medical expertise, drivers have never been safer – that’s a good thing and should continue to be a focus. But for drivers to actually confront the danger of driving is altogether rare at this point. Bianchi’s death may not impact much, but does serve as a reminder to both drivers and fans that a catastrophic event isn’t all that far away at any moment.

Consider the fact that the last driver to lose his life in F1 was Ayrton Senna – in 1994. That’s a long ways ago and shows how the sport has made changes to protect its drivers. While NASCAR and IndyCar have both lost drivers more recently, with Dale Earnhardt in 2001 and Dan Wheldon in 2011, respectively, both series continue to examine safety protocols and look at ways to make racing safer – even if the recent NASCAR race at Daytona and IndyCar race at Fontana bring questions.

Hence, the drivers on the grid this weekend will be confronting something rare. It’s likely they won’t be thinking about it much except when asked but Bianchi’s death still resonates. The drivers will all be sporting some kind of livery honoring Bianchi this weekend. Fans, too should remember him for it was all in the spirit of everyone’s entertainment that he died.  And with that, #ForzaJules… now, #RIPJules, #JB17. The moment of silence will be not just for him but for all of us.

The first race at the Hungaroring occurred in 1986 with Nelson Piquet earning the first victory. The compact track features 14 turns with two DRS zones, and is 2.72 miles in length. Retired driver Michael Schumacher and active driver Lewis Hamilton lead all competitors having gathered four victories apiece. Look for Hamilton to continue his success as he paced both practices to date. While Red Bull may have shown some life, Mercedes could not get proper fast laps in during the second practice due to Sergio Perez’s wild accident that ended with his car upside down.