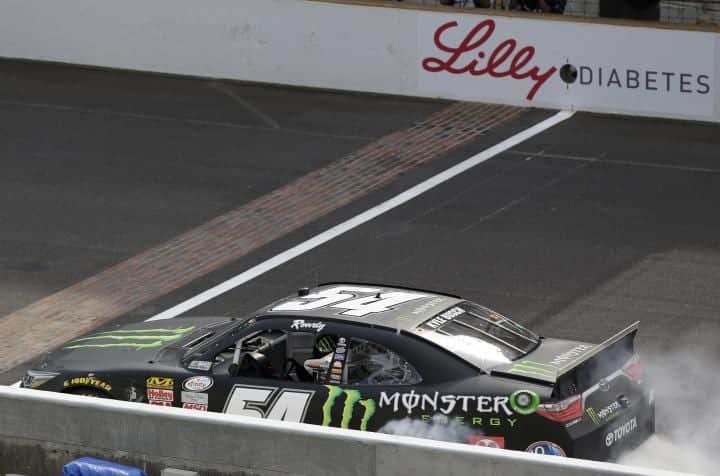 For much of the final stint in Saturday’s Lilly Diabetes 250, it appeared that Kyle Busch was going to suffer a repeat of last year’s loss to Ty Dillon.

Making his fourth NASCAR Xfinity Series start of the year, Busch had led 52 of the race’s opening 75 laps, on par with the 51 laps Busch had led on average in three previous NXS starts at the track. However, Busch lost the lead to Team Penske driver Ryan Blaney on the race’s final restart, similar to the way he lost the lead to Dillon last season.

Following the race, Busch was critical of the final caution, thrown by NASCAR officials for possible fluid on track.

“We should have won this thing going away, but I guess we had to make it exciting,” said Busch. “Kyle Busch cautions will always save the Xfinity race.”

Busch, 30, stalked Blaney over the final 25 laps, closing to the Team Penske driver’s bumper down the long straightaways of Indianapolis Motor Speedway, but he couldn’t get close enough to make a move.

Only when Blaney allowed his car to wash up the track in the closing lap did Busch finally complete the pass, roaring to the lead in his No. 54 Monster Energy Toyota as the two drivers made their way down the back stretch.

While Busch was happy to make the pass, in victory lane he admitted to some disappointment.

“It made for an exciting last lap,” said Busch. “We never should’ve been in that position to begin with, that’s what’s frustrating for me.”

Busch, now a two-time winner at IMS, has had a dominant car in each of the four NXS races at the Speedway, Indiana circuit, leading 206 of the 400 laps ran. Having thrown two races away in 2012 (crash) and 2014 (restart), Busch needed a break to avoid a third defeat.

“If it wasn’t for a mistake by the car in front of us we would have lost today,” said Busch. “That would have just been defeating for Chris (Gayle, crew chief) and these guys. We knew how good our car was.”

“He’s (Brexton) either a good luck charm or he just really likes going to victory lane because he’s certainly been to a lot of them in the last few weeks,” said Busch. “Just a great effort by our team and our whole organization, but to have the family there with my wife, Samantha and my son was really cool.”

“I’m not sure he knows exactly what kissing the bricks is all about, but he was certainly out there and taking it all in for what it’s worth today.”

The rich robbing from the needy to feed his ego.

Kyle Douche, I bet his favorite drink is vinegar and water. Is anybody still watching this mess?

Two quotes from “The Greatest of Them All”:

“We should have won this thing going away, but I guess we had to make it exciting,” said Busch. “Kyle Busch cautions will always save the XFINITY race.”

“It made for an exciting last lap,” said Busch. “We never should’ve been in that position to begin with, that’s what’s frustrating for me.”

Have you ever known anyone who is as cocky, arrogant, and conceited as Kyle Busch? Can I also add the word repulsive?