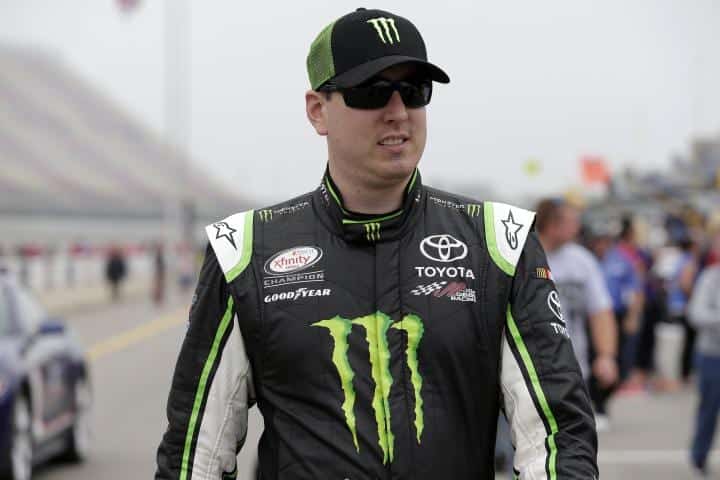 It’s a good time to be Kyle Busch.

Busch has won three of the past four Sprint Cup Series races and is moving closer and closer to securing a top-30 spot in the points standings. He continues his impressive run this weekend in the Xfinity Series qualifying on the pole for Lilly Diabetes 250.

The new package and format was not enough to stop Rowdy, who put his No. 54 Monster Energy Toyota on the pole with a time of 49.854 seconds (180.527 mph). The time was a new track record, with the previous record being set in round one by Paul Menard, who qualified fifth. Busch’s Joe Gibbs Racing teammate Daniel Suarez was second in both rounds of qualifying. Erik Jones‘s time of 50.020 seconds put JGR cars 1-2-3 on the starting grid. Brendan Gaughan will start to the outside of Jones in fourth.

Elliott Sadler was the fastest Ford in qualifying with a time of 50.328 seconds, which was good enough for sixth quickest. Brian Scott, who came very close to winning this event in 2013, qualified in the seventh position. Sprint Cup Series regular Aric Almirola was eighth quickest, with the defending race winner Ty Dillon in ninth and Kyle Larson in 10th. Ryan Blaney and  points leader Chris Buescher completed the top 12. Buescher was the fastest of the Xfinity Dash 4 Cash contenders.

The three other D4Cash contenders Chase Elliott, Regan Smith and Ryan Reed qualified 13th, 14th and 22nd respectively. Buescher, Elliott, Smith and Reed will compete for the $100,000 bonus in the 250-mile, 100-lap race.

That should help keep the stands empty and the TV’s tuned elsewhere! Thanks NASCAR.

Did a great job of it. I think I’ve been to high school football games that were better attended.