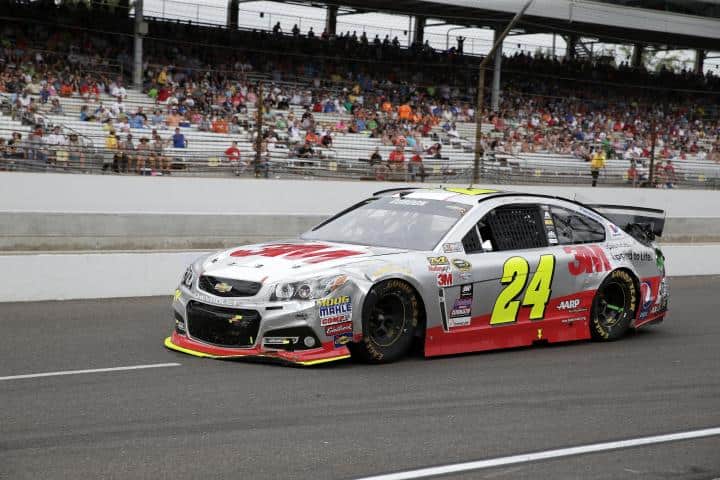 Instead, the Pittsboro, Indiana driver will leave disappointed.

Gordon, 43, was running inside the top 15 during Sunday’s Crown Royal Presents the Jeff Kyle 400 at the Brickyard when he was involved in a lap 50 accident with Clint Bowyer. Trying to avoid Bowyer, Gordon spun into the outside wall, resulting in significant damage the front and rear of his No. 24 3M Chevrolet.

Gordon would bring his mangled car to pit road for repairs, returning to the track on lap 54, but his damage was too severe. After running multiple laps below the race’s minimum speed, a disheartened Gordon brought his Chevrolet to the garage area for repairs on lap 75.

“We were just racing there on a restart,” said Gordon. “I was side-by-side with Kasey Kahne and I saw the No. 15 (Clint Bowyer) get sideways and was just trying to avoid him and we both kind of got loose. I got loose. The car came around and it was just everything I could do to try to recover and not hit the No. 15.

“And then it spun around and got into the outside wall and tore-up the nose.”

Gordon, who has a record five victories in the Brickyard 400, came into Sunday’s race 10th in series points 73 points ahead of the current Chase for the Cup cutoff. Still winless, Gordon would currently make the Chase on points.

“We’re never going to give up,” Gordon said. “We got back out there as fast as we could. The splitter was too torn up on the front and creating lift. The car didn’t have any front downforce and was pushing bad.

“We’re probably going to cut the nose off, put a new nose on and get back out there.”

Man, he can’t seem to catch a break. I though for sure it was his race. That stunk.

I must clarify, I had a good feel for him doing good and possibly winning the dang thing. My radar was off, just like when I used to pick lotto numbers.

What a bummer. Honestly, I did not think his chances of winning Indy were that great this year. He hasn’t been running in the top 5 much and the odds of any driver winning Indy back to back aren’t that great either. Add in a new race package with no testing and it’s kind of a crapshoot of who hits it and who doesn’t. On the other hand, I didn’t expect a 42nd place finish either. Bummer.

For all the good luck he had last year, this year is the complete opposite. Sometimes it goes the other way. Luck has a lot to do with success.