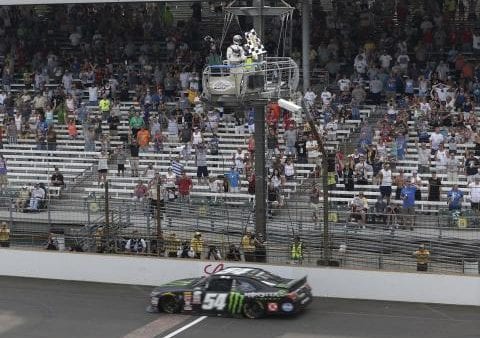 Indianapolis Motor Speedway is not known for last lap passes, but when a checkered flag is within reach, Kyle Busch has shown he can do amazing things. On Saturday in the Lilly Diabetes 250 in the NASCAR Xfinity Series, the all-time NXS race winner did just that.

After qualifying on the pole, Busch dominated much of the 100 lap race, but on the final restart with 25 laps to go, Penske Racing’s Ryan Blaney passed the veteran driver. On the last lap, Blaney bobbled off turn 2 and Busch made the move to the inside of the track, making the pass for the lead and the win. “I just got close enough to make him mess up and made him get tight off of two and I was able to capitalize underneath him with him losing his momentum,” said an exhausted Busch in the victory lane.

Following the race, Blaney said, “I messed up [turn] 2 and he got a run on us. It was my fault… the driver gave it away.”

After qualifying second, Daniel Suarez finished third, making it his third consecutive top-five finish. Paul Menard led nine laps and finished fourth, followed by Elliott Sadler in fifth. Kevin Harvick had an unusually bad day, but was able to salvage a sixth-place finish with his No. 88 JR Motorsports team. Harvick’s teammate Regan Smith was the highest of the four drivers eligible for the Dash 4 Cash, finishing eighth, and received the $100,000 bonus. Kyle Larson was seventh, last year’s Indianapolis winner Ty Dillon finished ninth and Chase Elliott finished 10th. Suarez, Sadler, Smith and Dillon will compete for the next Dash 4 Cash at Bristol in August.

The race on Saturday was the first race for the Xfinity Series cars with the high-drag package similar to what the NSCS will be running on Sunday. Several drivers stated throughout the weekend that the package increase the effect of the draft down the straightaways, but it was difficult to capitalize and make the pass. Following the race, several drivers were displeased with the racing the new package produced. This is currently the only race scheduled to run this new aerodynamic package.

Many drivers were physically exhausted after dealing with hot temperatures. The rear extensions added to the cars to increase drag allowed less heat to escape the cockpits. Busch, Dillon and Sadler were among the many drivers that were affected by the heat. “This is the hottest I’ve been a racecar in a long time” Sadler said on his way to the infield medical center. This could prove to be a challenge in Sunday’s Sprint Cup Series race which is 60 laps longer. Tweeted  Brad Keselowski:

Expecting tomorrow to be the hottest race I've ever drove in. 140+

Driver and teams will look to do whatever they can to prepare for a more than likely very grueling race on Sunday.

NXS drivers also had very few breaks, with the race only being slowed three times due to cautions. The most notable caution was the first one when Blake Koch and David Starr collided in turn 1. Erik Jones crashed with less than 30 laps to go to bring out the race’s final caution.

Series points leader Chris Buescher had a less than satisfactory race, finishing 16th. He now has a 25-point lead over defending series champion Chase Elliott, and 30 points over Dillon heading into the U.S Cellular 250 at Iowa Speedway next Saturday at 8:00 p.m. ET on NBCSN.

I would say luck shines on this clown again. Ryan Blaney was cursed with what Penske drivers have had in a few races…old timers that need to get the hell of the track. Where was Derrick Dope’s spotter? Ryan, it was yours and damn, that was one thing nobody wanted to see, unless you are one of the few fans of THAT guy. Gotta wonder! Go get em’ tomorrow Ryan! That was your race to win, sadly…well you know the rest. There is no way in hell that Busch would have caught him if the idiot Dope didn’t enter into the picture, which should never be. Usuall this blatant bull is done in the back away from the cameras. Now we are going to have to hear all week about the wonder of this clown, when it was handed to him again. Yes, yes..I know that is racing…but what is written about by the media isn’t.

I was so hoping that Ryan could have held off that egocentric jerk. But, I think he let Clown-Kyle get to him. Plus, it looked like he was going to try to block Busch, but thought the better of it. He probably realized that Busch would have deliberately wrecked him in retaliation, and done so with a smile of his face!

As for Cope, he needs to just call it a day. What really angers me about him is the car he drives was the same car Johanna Long drove last year. But the team couldn’t find sponsorship (who would sponsor anyone in a series dominated by top-tier drivers inflating their egos), so Cope was able to buy the team, thus kicking a young, deserving driver to the curb.

I think we have to be careful criticising the almighty Mr. Busch, else we will face the wrath of one Mr. LMartin, coming back and calling us all whiners for not being in awe of “the greatest driver to ever compete in NASCAR’. Oh, I think I’m going to be sick for writing that!

It is amazing the psychology of some regarding someone who has self destructed for years, hasn’t come close to winning a championship, drives in Joe Gibbs cars in Xfinitiy that are practically on autopilot. Kyle’s comments after that race was typical..but yet some want to say he has “changed”. A leopard does not change his spots. Go Ryan Blaney! There are one or two Kyle lovers around the internet that are always telling you what a fine human being he is..blah, blah, blah. Paid trolls I think.